Greater supply could give first home buyers a ticket into the property market – August, 2018

6 August, 2018, Sydney, Australia – When it comes to resolving the housing affordability issue for first home buyers, experts and economists believe creating more supply could be the answer, according to finder.com.au, the site that compares virtually everything.

In the monthly finder.com.au RBA survey, panellists were asked to identify measures to improve housing affordability for first home buyers.

The primary response was to increase supply, which was cited by 63% of respondents. Following this, reducing or abolishing stamp duty for first home buyers (53%) and targeting investors with stricter rules on negative gearing (37%) were also listed as tactics to boost affordability.

Interestingly, 16% (3 of 19) of experts and economists said nothing needs to be done to fix housing affordability, which is up from 3% (1 of 30) last time this question was asked in May 2017.

Some respondents said relocating to smaller cities or regional centres, as well as boosting infrastructure and transport to regional areas, could improve affordability for first-time purchasers.

“Creating more housing could ensure first home buyers aren’t being priced out by buyers or investors with deeper pockets,” he said.

Interestingly, finder’s Economic Sentiment Tracker shows 33% of the panel feel positive about housing affordability, which is up from 23% last month. The jump in positive sentiment may be due to falling property prices in recent months. 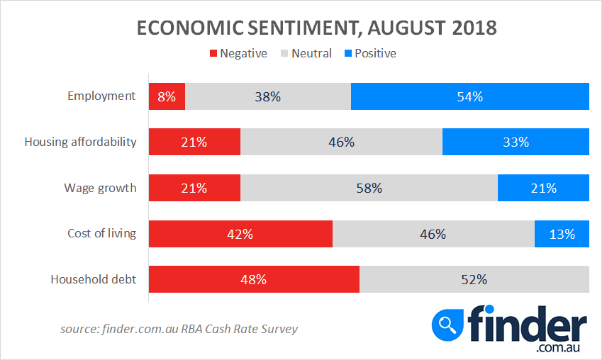 Respondents were also asked to give forecasts for auction clearance rates (ACRs) across the nation’s capital cities.

Sydney's ACR dropped to around 50% in July, and the majority of respondents (81%) believe this will stay at 50% or less at the end of the year.

Interestingly, 93% of respondents think Brisbane’s ACR will stay below 50% at the end of 2018.

“Brisbane’s recent clearance rate of 36% suggests residential property market appetite has weakened, and buyers are sitting on the sidelines,” he said.

Meanwhile all 31 panellists are forecasting the Reserve Bank will hold the cash rate at the board meeting tomorrow (07/08/2018).

Sentiment has shifted towards a cash rate fall with only 72% of the respondents believing the next move will be an increase, which is at the lowest point since we began asking this question.

Not a single expert or economist is predicting a cash rate rise this year, however three are predicting a decrease before 2019. Jordan Eliseo, ABC Bullion (Hold): "The RBA will remain on hold for some time. Whilst they are no doubt concerned regarding continued low levels of inflation and wage growth, overall performance in the Australian economy suggests the most prudent course of action is to stay the course as regards interest rate settings. Lower house prices, and the potential for a negative "wealth effect" will be on their radar, but it will be some time before they next move."

Shane Oliver, AMP Capital (Hold): "Growth has picked up a bit and the RBA is optimistic, but inflation and wages remain too low, property prices are falling in Sydney and Melbourne, the housing construction cycle has peaked and uncertainty remains around the outlook for consumer spending. So it's way too early to hike, but hard to mount a case for a cut either right now. So best to remain on hold."

Paul Dales, Capital Economics (Hold): "The RBA is increasingly worried that financial conditions will be tightened by banks raising their mortgage rates and using stricter credit criteria, so it will keep interest rates at 1.5% so as not to make things worse. "

Saul Eslake, Corinna Economic Advisory (Hold): "Although overall economic growth is now close to trend, unemployment (and especially underemployment) remain higher than the RBA wants, while the June quarter CPI data showed underlying inflation still running below the lower bound of the RBA’s target range. And most measures of wage inflation remain at or close to historic lows. It’s difficult to envisage the RBA Board altering its conclusion that the next movement in rates is some way off. "

Peter Haller, Heritage Bank (Hold): "There is no rationale for the RBA to change rates at this point in time."

Shane Garrett, Housing Industry Association (Hold): "Australia's economy is creating healthy volumes of new jobs, although the majority of these are part time. Inflation and wage pressures are under control, while dwelling prices have softened in both Sydney and Melbourne. This is not the time for interest rates to rise. The likelihood that the next move will be downward is growing."

Leanne Pilkington, Laing+Simmons (Hold): "Weak underlying inflation strengthens the case for the RBA to leave rates on hold. The housing market requires this stability at the moment."

Stephen Koukoulas, Market Economics (Hold): "The RBA will hold rates because it continues to place a higher priority on reducing house prices than meeting its inflation target and tackling the slack in the labour market. It should be cutting interest rates."

John Caelli, ME (Hold): "Despite strong employment data, the weaker than expected CPI figures together with subdued wage growth and concerns around inflation and household debt levels, will likely keep rates on hold."

Michael Yardney, Metropole Property Strategists (Hold): "There is no reason to alter interest rates. Our weakening housing markets, low inflation rate and soft wages growth suggest no rise in rates is imminent. If anything this would dampen already sluggish consumer confidence."

Mark Crosby, Monash University (Hold): "RBA has strongly signalled that rates will remain on hold for at least a few months, and most likely into 2019."

Jacqueline Dearle, Mortgage Choice (Hold): "I expect the RBA to hold the official cash rate at 1.5% in August 2018 because despite good global economic growth, the domestic economy is below expectations with wages and inflation likely to remain low. New tightened lending standards and increased scrutiny around borrower living expenses coupled with cooling property prices will also play a factor in the RBA’s decisions to hold."

Jonathan Chancellor, Property Observer (Hold): "There's nothing but watching and waiting on the RBA agenda for the time being."

Matthew Peter, QIC (Hold): "The June quarter CPI report has buried recent commentary that the RBA should be considering a rate increase."

Jo Horton, St.George Bank (Hold): "Economic growth is solid, business conditions are elevated and jobs growth is strong. There are risks to the global economy, including trade concerns and the domestic economy, including housing. There are downside risks emanating from a tightening in lending standards and recent upward pressure on wholesale funding costs, as recently highlighted by the RBA. This suggests the RBA will leave interest rates on hold for an extended period."

Bill Evans, Westpac (Hold): "The June Quarter CPI, and the revisions to our inflation forecasts are consistent with an RBA on hold out to the end of 2019."