6 April 2020, Sydney, Australia –Despite spending more than $320 billion in response to COVID-19, experts say even more money will be needed from the government.

Results from the Finder RBA Cash Rate Survey™ this week, show that experts and economists are unconvinced that the federal government's stimulus packages will be sufficient to see the country through to the end of the year.

Three-quarters (73%, 16) of respondents said they expect another stimulus package will be needed.

A similar number (75%, 15) who weighed in on the Australian shares market, expect it to fall further this year.

Graham Cooke, insights manager at Finder, said as hard as it is to believe, 16.4% of the country's nearly $2 trillion GDP may still not be enough.

"If the aim is to build a bridge to the other side of this crisis, there might still be some materials that need to be purchased.

"On top of trying to close the gap, this pandemic has created, the near-40% loss in value of Australia's share market may not be over just yet.

"With the full effects of coronavirus still to be understood, expect the high volatility we have seen in the shares market of late to continue for months."

Cash rate to stay put, but QE on cards

All 23 economists and experts surveyed expect the Reserve Bank of Australia (RBA) to hold the cash rate at 0.25% on Tuesday.

"Most economists highlighted that the RBA will treat 0.25% as if it is 0% and have no appetite to cut further.

"This leaves only one effective tool in the RBA's armoury: quantitative easing," Cooke said.

Quantitative easing (QE) is a process where the central bank creates new cash to decrease, or ease, the cost of borrowing.

In Finder's December 2019 survey, nearly half (46%) of experts predicted it was likely we'd see QE in 2020, well before there was any concern of a global pandemic or a lockdown.

RBA governor Phillip Lowe insisted at the time that the federal bank had "no appetite" for QE.

Shane Oliver of AMP Capital said history has shown the folly of going to negative interest rates in other countries.

"0.25% has long been identified by the RBA as the lower bound.

"There is little benefit to be gained by going to zero or negative based on the experience of Europe and Japan," Oliver said.

Cooke said negative sentiment on household debt, wage growth and employment are at 62%, 86% and 100%, respectively.

"The sentiment on employment is our first-ever 100% negative response on any economic metric. The Coronavirus pandemic has taken a sledgehammer to the economy, and there is no end in sight," he said. 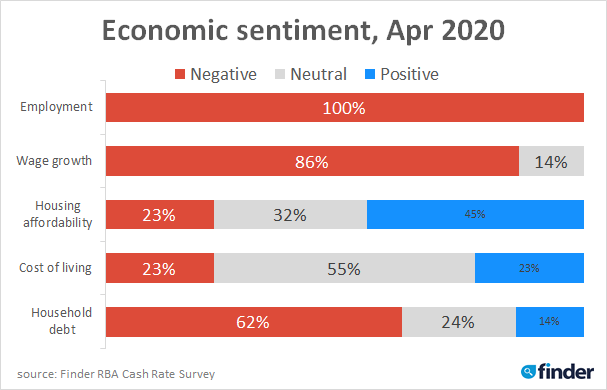 Cooke said there was one result that portends good news for homebuyers.

"The social gathering restrictions have had a large positive effect on housing affordability.

"With estate agents obliged to take viewings by appointment only, and auctions forced online, downward pressure on the housing market is inevitable.

"With both fixed and variable rates at record lows, anyone who has a deposit saved up right now could be in a very powerful position."

The rise in positivity around housing affordability – at its highest level since last June – has pulled the average of positivity across all five metrics higher than last month.

"Before the pandemic hit, the worry was that housing prices were continuing to rise even as wages, household debt and cost of living didn't improve.

"Now, after a global business disruption unrivaled in recent history, the cost of housing might just come back into sight for some Aussies looking to buy," Cooke said. 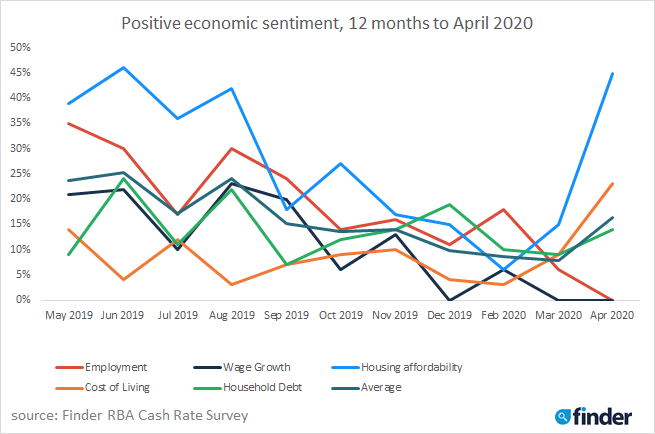 Here's what our experts had to say:

Shane Oliver (AMP Capital): "0.25% has long been identified by the RBA as the lower bound. There is little benefit to be gained by going to zero or negative based on the experience of Europe and Japan."

David Robertson (Bendigo and Adelaide Bank): "The RBA have consistently stated that they consider 0.25% as the 'effective lower bound' for the official cash rate, and that they have no appetite for negative interest rates."

Marcel Thieliant (Capital Economics): "The RBA has stated that 0.25% is the effective floor. More importantly, the 0.10% interest rate on reserves now acts as the floor for interbank rates. The RBA has now de facto cut rates to 0%."

Peter Boehm (CLSA Premium): "The RBA has already signalled interest rates effectively at their floor. I cannot see any material value in dropping rates further. Such a move would likely cause more harm than good."

Craig Emerson (Craig Emerson Economics): "The RBA has stated publicly that it considers 0.25% to be the lower bound."

Trent Wiltshire (Domain): "The Governor clearly stated that the effective lower bound for the cash rate is 0.25 per cent."

John Rolfe (Elders Home Loans): "The recent financial support from the Federal and State Governments need to flow through. The RBA needs to keep its powder dry in case this gets worse."

Angela Jackson (Equity Economics): "I don't think they will move to QE yet - we may see it once the economy is able to grow again, but until then it is a hold."

Mark Brimble (Griffith University): "[The RBA] will want to hold back and see how announced measure impact on key economic parameters."

Peter Haller (Heritage Bank): "The RBA has said 0.25% is the effective lower bound."

Leanne Pilkington (Laing+Simmons): "It is worth seeing how the recent out-of-cycle cuts play out before cutting rates to this critical mark. Certainly these are unprecedented times and the RBA has already taken drastic measures."

Nicholas Gruen (Lateral Economics): "They should, but they've said they won't. I wouldn't have taken this seriously, but Westpac's Bill Evans seems to and he follows these things."

Jeffrey Sheen (Macquarie University): "I believe that 0.25% is the effective lower bound for the cash rate, according to the RBA."

Tony Makin (Griffith University): "Hard to predict, but to cut again so soon would have minimal impact in current circumstances and add to the extreme uncertainty caused by the devastating impact of COVID-19."

Michael Yardney (Metropole Property Strategists): "There would be no benefit cutting rates again so soon, especially since the banks haven't yet dropped their rates to residential borrowers."

Dr Andrew Wilson (My Housing Market): "Will have no material positive impact in shorter term."

Rich Harvey (Propertybuyer): "RBA have already indicated in their statements that 0.25% is the lowest they are prepared to go."

Brian Parker (SUNSUPER): "RBA have made it clear that 0.25% is their effective lower bound."