Are Aussies paying the price for their generosity?

16 April, 2018, Sydney, Australia – One in eight Australians now provide financial assistance for relatives overseas, but confusion remains when it comes to getting the best exchange rate, according to new research from finder.com.au, the site that compares virtually everything.

According to the latest World Bank statistics analysed by finder.com.au, the amount of money leaving Australia rose by 6% from AUD$7.74 billion in 2015 to AUD$8.21 billion in 2016.

“Ordinary Australians are working hard to support themselves as well as family members living overseas who may not have the quality of life they do without their help.

“Some people feel it’s their moral obligation to send money to family and do it willingly and frequently.”

Ms Hassan says while the number of people sending money to family is high, it’s not surprising given nearly half of all Australians were either born overseas (first generation) or have at least one parent born overseas (second generation). 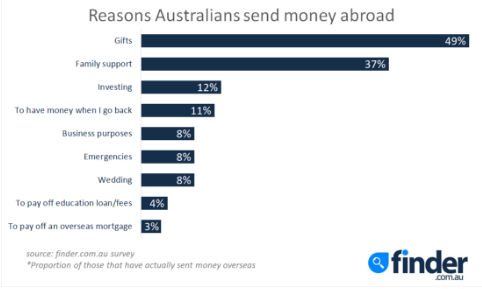 “What’s worrying is too much of the money sent from Australia is not reaching who it’s intended for because it is being diminished by fees.”

According to the survey of over 2,000 Australians, the majority (60%) of Australians who have sent money abroad either don’t know where to source the best exchange rate (43%) among banks, Paypal and specialist transfer providers, or simply went with one of the Big Four Banks (17%).

Ms Hassan urged those sending money abroad to compare their options and potentially save hundreds.

“When it comes to fees, it can be cheaper to send money internationally through specialty foreign exchange providers over banks.

“Australians could be using the most expensive provider for international money transfers and they wouldn’t even know it,” she says.

finder.com.au analysed the average fee to send $300 to a bank account in the UK. Of the six transfer providers1 examined in this research, the average sending fee was $6.75. This compared to the Big Four, who charge an average of $11 to send funds overseas, resulting in lower funds transferred.

“Banks are notorious for charging costly foreign transfer fees as well as offering less favourable exchange rates so check out some of the other options including online money transfer services,” Ms Hassan says.