30 October, 2019, Sydney, Australia – Cash might be headed the same way as the Tasmanian tiger, according to Finder, Australia's most visited comparison site.

A recent survey of 1,000 respondents revealed that 23% of Aussies, equivalent to 4.4 million people, no longer carry cash.

Kate Browne, personal finance expert at Finder, said as we increasingly become a cashless society, the need for wallets may soon be non-existent.

"Cards are the new cash. With tap and pay accepted almost everywhere these days, physical currency is no longer necessary.

"Between digital wallets on smartphones and loyalty card apps, there's increasingly no need for a wallet. Eventually we'll be able to pay for everything with a smart device," she said.

However the research shows that some Aussies remain committed to carrying cash, with the average person holding $59.40 in their wallet.

Millennials are twice as likely (24%) to have no cash on them as baby boomers (11%), while men generally carry twice as much as women. Males carry $74 on average compared to $44.90 for females.

Browne said that although the amount of cash Aussies are carrying has dropped, many people still like to have a few coins or notes handy.

"At this stage, there are still situations where spare change doesn't go astray. We might want to grab sausage sizzle on the weekend or buy something from a cash-only business.

"But it will be interesting to see whether this is still the case in 10 years' time," she said.

How much cash do you have in your wallet right now? 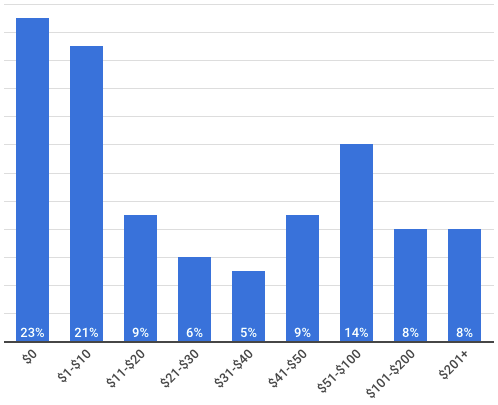 How to ditch your wallet