12 June, 2019, Sydney, Australia - Australia may have seen a surge of better value mobile plans in the last year but many consumers are still facing bill shock, research by Finder Australia's most visited comparison site revealed.

The new survey of 1,015 people showed that one in 10 (9%) respondents – equivalent to 1.4 million Australians – have faced an unexpectedly high mobile bill in the last 12 months.

Generation Z are most prone to getting stung, with 21% stating they've faced an unexpectedly high bill in the last 12 months, in comparison to 10% of Generation Y, 6% of Generation X and 4% of Baby Boomers.

The research shows that Aussies are still underestimating their Internet usage, with excess data charges the main culprit for mobile phone bill shock. This was followed by charges racked up from making international calls.

Alex Kidman, tech expert at comparison site Finder said bill shock should be a thing of the past.

"Big data plans are becoming the norm. Telcos are offering 40GBs to 50GBs at really affordable prices so if you're constantly going over your data limit you're on the wrong plan and it's time to switch.

"If you're on a plan that includes 6GB of data, but you find yourself forking out for an extra 3GB every month consider upping your data limit. It's better to overestimate your plan by a few gigabytes than to be slapped with a hefty bill at the end of the month."

The majority (65%) of those with an unexpectedly high bill – 907,000 Australians – just paid the fees instead of calling their provider and challenging the charges.

It's confronting to see the number of Australians happy to just accept their expensive phone bills, Kidman says.

"Consumers often forget the power of their loyalty.

"If you feel like these charges aren't fair, you should call and ask your provider to waive your bill, or at least give you a discount. Most providers will help you out with the hope of keeping you as a customer.

"Make sure to keep a record of any conversations you have with your provider. Make notes, not just of the time and date, but also who you talked with."

Kidman reminds Aussies there are independent parties that can help consumers challenge their expensive bill.

"You should find instructions to dispute a bill on your providers website. If you're still not having luck and you legitimately believe you've been unfairly charged you can take it to the Telecommunications Industry Ombudsman (TIO)."

The onus is also on the consumer to make sure they're using their plan within its parameters Kidman said.

"Providers are now required to send you a message once you're about to reach your data limit. Instead of turning a blind eye to these messages and accepting the excess charges, change your usage habits. 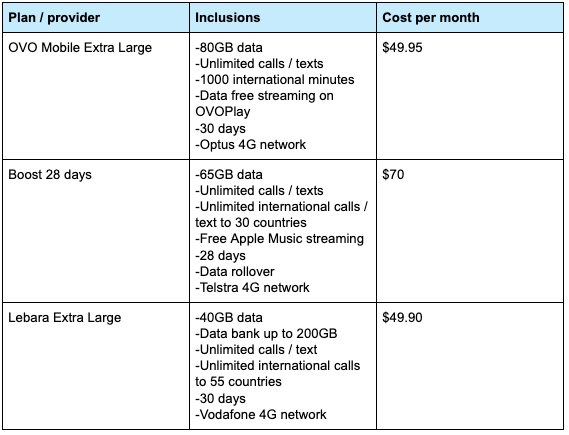 How to avoid going of your data limit