Home phones to become extinct by 2037

23 April 2018, Sydney, Australia – Every Australian home could be without a landline phone sooner than we think reveals new research by finder.com.au, the site that compares virtually everything.

According to finder.com.au analysis of Australian Communications and Media Authority (ACMA) data, landline phones are projected to become extinct as soon as 2037.

Based on this decline, finder.com.au predicts that only half of Aussie homes will have a landline in 2021. 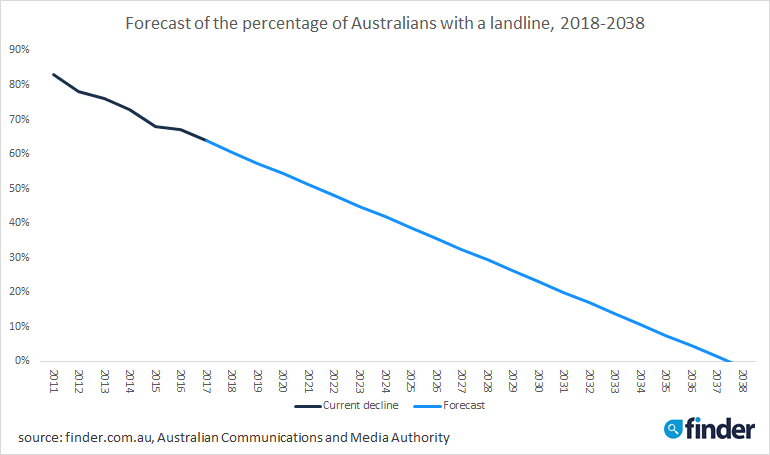 “Even at current decline rates, by 2035 the number of Aussies with landlines would only be the equivalent of the population of South Australia.”

“For some, the death of the landline has already hit. In fact, it’s likely that many young Aussies will grow up without the sound of landline ringing through their homes.”

“Many households are smartphone-only and it’s no surprise. Most phone providers offer plans with unlimited calls and text for at prices similar to, and often less than landline line rental fees. If you’re receiving reliable reception there’s really no need to fork out for a landline phone too.”

Previous finder.com.au research shows that 29% of Aussies have a landline and regularly use it – the majority are older Australians.

Almost one in six (15%) admit they only have a landline phone for their Internet connection, while a further 13% say they have a home phone but never use it.

“If you’re at home and you’ve got to make a phone call, you’re not going to look up the person’s number in your mobile phone and then pick up your landline to make the call. It’s really just a matter of convenience,” Mr Kidman says.

Many Aussies have held onto their landline to contact relatives overseas, but now even that has become easier - and not to mention cheaper - through smartphone apps like Skype and WhatsApp.

“With the rollout of the NBN, it’s likely we could see homes ditch their landline a lot sooner than we anticipate.”

A large number of those Aussies that are holding onto their landlines are likely doing so because they rely on it during emergency situations, such as a blackout.

What these Aussies don’t know is that with the continued rollout of the NBN and the transition of fixed line to VoIP (Voice over Internet Protocol ) this reason becomes invalid.

“When you make the switch to the NBN the current copper network that your landline runs off will get be switched off. If you want to keep your landline you’ll need to move your services over to a VoIP (Voice over Internet Protocol) service, which means if there’s a blackout and your power goes out, you won’t be able to use your landline phone anyway. In that situation, however, your mobile phone should keep rolling along fine for emergency purposes.”

This might be the most obvious but it’s surprising how many Aussies keep their landline phone just for the sake of it. Even if you’re not using it, you’re probably paying line rental to your Internet Service Provider for it. Instead of forking out for something you don’t even think twice about it’s time to ditch it.

If you’re the only one left with a landline phone, perhaps it’s time to move on. Even if some of your older family members aren’t ready to let go, you can still ditch yours to save money. You can make the exact same phone calls on your mobile as you can on a landline, so what’s the point in keeping both?

If you’re switching over the to the NBN, your landline phone will run using VoIP technology, most of the time as an add-on rather than part of your actual package. If you don’t want to fork out for something you might not use it’s best to ditch it when you sign up to an NBN plan. If you do want to keep it, bear in mind that every time you have an Internet outage your phone will also cut out.

You need to make sure you have reliable reception in your home before you disconnect your landline. Although you can make phone calls using Apps that will use your Wi-Fi, such as WhatsApp and Skype, if you don’t have phone reception people that try to contact you via your mobile phone will find themselves in a bit of trouble.