Nintendo Switch: Everything you need to know | finder.com.au

The console codenamed NX was officially announced as the Nintendo Switch on 21 October 2016. It was unveiled via a lively trailer that demonstrated the home/handheld hybrid in action, including its detachable Joy-con controllers, six games and traditional gamepad support.

On 13 January, Nintendo revealed finer details on the Nintendo Switch through a live stream from Tokyo, including different SKUs, Joy-Con functionality, online play and over 30 titles (including a new Super Mario title).

Now that the Nintendo Switch is out in the wild, let's take a deep look at the console's hardware and games.

I want to know about

eBay is selling the Nintendo Switch today for just $299 – that's over $170 off the RRP! Here are the details.

Amazon Prime Day's best Nintendo Switch deals include $60 off Switch consoles (with free Minecraft game) and up to 25% off best-selling Switch games.

Find out where you can snap up the cult-favourite console and which stockists will ship it to you for free.

The Nintendo Switch saw over 100 titles released for it in its first year. The list included stalwart franchises like The Legend of Zelda, Super Mario and Bomberman but also a huge selection of quality indies like Shovel Knight.

The Legend of Zelda: Breath of the Wild

Breath of the Wild turns a new leaf for the series by completely removing the shackles of the series' typically linear progression and opens up Hyrule giving the player more freedom than ever. RPG and adventure fans will get more value out of Breath of the Wild than any title previous, thanks to a new level of inventory management, sprawling side-quests and a stronger difficulty curve than most Nintendo games offer.

The Legend of Zelda: Breath of the Wild received unanimous praise from critics all over the world, as far being named one of the best games in history by many outlets.

It's the perfect fit for someone looking for a deep, rewarding single player experience for their Nintendo Switch 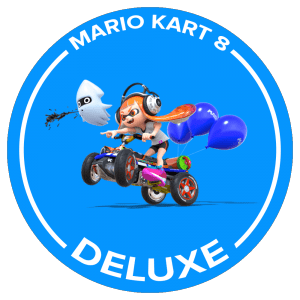 Mario Kart 8 Deluxe brings all of the sweet karting action from the Wii U generation to the handheld Switch.

While the majority of the game is the same Mario Kart 8 we all know and love, there are a few new characters and an all-new battle mode to sweeten the pot.

Mario Kart 8 Deluxe comes packaged with all the DLC released last generation and adds Splatoon's Inklings, King Boo and Dry Bones to the roster of racers.

Odyssey takes Mario on an epic adventure through many different worlds, including one that's eerily similar to our own. This time around, Mario travels the globe, exploring the reaches of the Mushroom World like never before.

Odyssey's other big feature is Mario's sentient cap. Mario's iconic red cap has a life of its own in Odyssey. The player uses Mario’s cap to fight enemies and solve puzzles.

The Nintendo Switch comes with the Switch tablet, a dock with HDMI output and two Joy-Con controllers. Here's everything you need to know about Nintendo's hardware.

With all these detachable parts, what is the Switch exactly? Technically the tablet at the console's core is the Nintendo Switch. The console itself is exclusively sold in a package that includes the Switch Dock, two Joy-Con controllers and all the required cables.

For a more detailed breakdown on how much the Nintendo Switch costs around the world, check our Switch price comparison. Otherwise, the Switch is sold in two different SKUs at the same price.

Thanks to our 10% Goods and Services tax, the Nintendo Switch is a little pricier in Australia than it is in other countries (but New Zealand has it worse).

Before the official announcement, the Switch's specs were undoubtedly the hottest topic when it came to wild rumours. While we know a lot more about the console itself, there's still a lot we don't know, like exactly how powerful the Switch's custom Nvidia Tegra chipset is. Here's what we do know about the Switch's specs. Whether it's placed in the dock, tabletop mode or handheld, the Joy-Con controllers are an essential part of the Switch's hardware.

The Joy-Cons come in grey and red/blue neon variations. They are also compatible with various accessories, like a charging grip and wheel frames. Here's how much they will cost you in Australia.

The Nintendo Switch's Joy-Con controllers share a similar button layout to the Wii U gamepad, with the exception of a share button and altered joystick placement.

The Joy-Cons boast new features like HD Rumble and an IR Sensor. The former simulates real-world sensations, like rattling ice in a glass, and the latter can identify movement, shape and distance. For example, you could play scissors, paper, rock and the Switch would be able to identify the action of moving your hand, how far it is from the sensor and which action you chose.

The Joy-Con controllers are quite small when separated. Here are the specifications for the Nintendo Switch Joy-Cons. 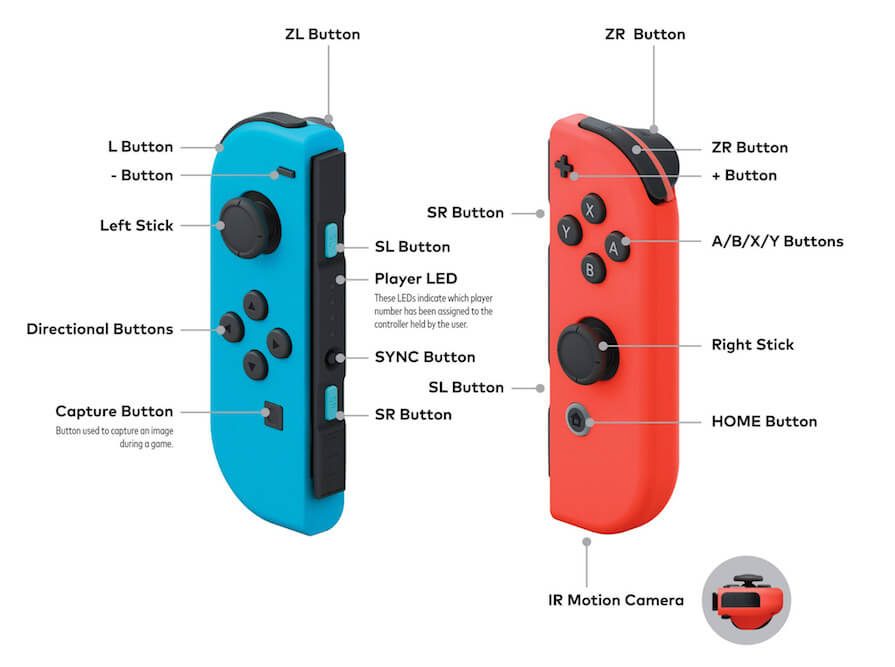 Nintendo subtly revealed more than 30 games at its January 2017 Switch event. We combined those titles with rumoured and leaked titles in one comprehensive list.
If you are feeling overwhelmed by the amount of games to choose from, finder has you covered. Check out our list of the best Nintendo Switch games of 2017.