Apple's TV streaming service Apple TV+ is here and expanding all the time. Here's everything you need to know about the platform.

After a steady run of rumours, leaks and speculation, Apple finally released its streaming TV service back in November 2019. Apple TV+ aims to be a genuine rival to Netflix, offering on-demand and exclusive TV series and movies from some of the world's best storytellers. Here is everything you need to know about Apple TV+ before deciding whether or not to tune in.

What is Apple TV+?

Apple TV+ is a subscription, on-demand streaming TV service. It shares many similarities with the Netflix premium service. This includes 4K video, Dolby Atmos audio on most content, family sharing for up to six users, and the ability to stream on six devices simultaneously. Like Netflix content can be downloaded for offline use, too.

How much does Apple TV+ cost?

Monthly pricing for Apple TV+ sits at AU$7.99. Originally there were no pricing tiers unlike most other streaming services. So the $7.99 is all you'll pay for full access to all Apple TV+ content at the highest resolution.

Apple also offers a 7-day free trial for all new Apple TV+ subscribers. Plus, if you buy a new Apple product, it will come with a year's subscription for free.

However, there's also now the option to add Apple TV+ in a bundle via Apple One. The price for this option varies between $19.95 per month and $39.95 a month depending on how many other Apple services you're looking to bundle.

Regardless of which bundle you choose Apple TV+ is included. And you will save money via a bundle when you factor in the price of paying for the services individually. If you go down this route you can also get a 30-day free trial instead of the usual week long offer. You can learn more about Apple One here.

Watch every Apple original on Apple TV+. New titles are addeed every month.

When did Apple TV+ release?

Apple TV+ released in Australia on 2 November 2019. Over 100 countries across the globe got access to the service on the same day.

Which devices will Apple TV+ be available on?

In addition to the usual suspects, iPhone, iPad and Apple TV, Apple TV+ is available on Mac and iPod Touch. At launch, a native app was available on Samsung TVs.

Sony and LG smart TV support has since become available too. Amazon Fire TV, Roku, Google TV and Airplay support are also confirmed, plus you can watch it through the Apple website on a browser.

Since launch Apple TV+ has had an app made available on gaming consoles. The PlayStation 5, PS4, Xbox One, Xbox Series X and Xbox Series S are all compatible.

As mentioned above, all Apple TV+ titles will be available for offline viewing. 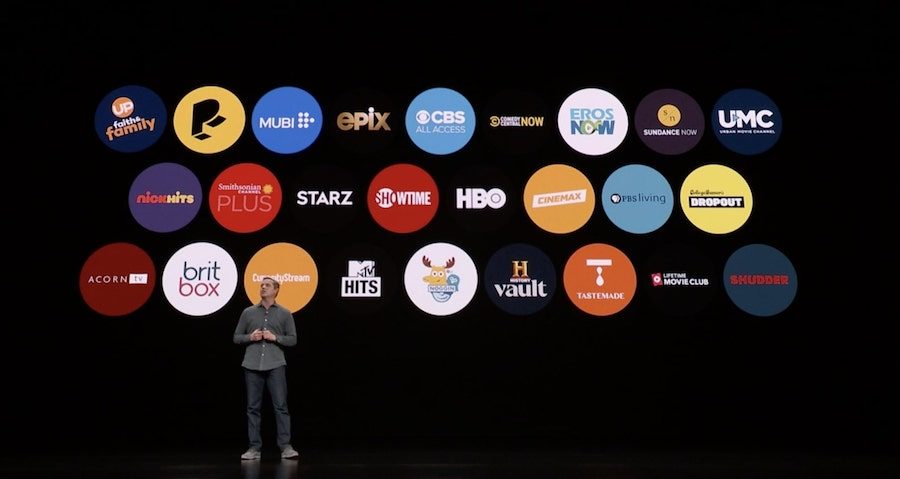 What exclusive TV shows will be coming to Apple TV+ (updated)?

At the launch for the Apple iPhone 13 on 15 September 2021, among other things, it was revealed the programming that would be on Apple TV+ in the coming season.

The wildly successful Ted Lasso was highlighted, along with debuts or new seasons of titles like The Morning Show, The Problem with Jon Stewart, Swagger and new Tom Hanks project Finch. You can see the highlights in the clip below.

Only nine shows (eight TV series and one movie) were available at the launch of Apple TV+, with a steady stream of additional content arriving well into the future. One of the big pluses of Apple TV, pun intended, is that all that content is exclusive, new content. The shows have big impressive budgets and have big stars attached.

This was clearly evident during Apple's initial reveal presentation of Apple TV+. First to take the stage was Steven Spielberg, who introduced his upcoming anthology series Amazing Stories, a remake of the 1985 NBC series of the same name.

Jennifer Aniston, Reese Witherspoon and Steve Carrell all took to the stage to discuss The Morning Show, which takes aim at sexism and inequality in a US morning show studio.

Jason Momoa (Aquaman) and Alfre Woodward (Luke Cage) also arrived on stage to introduce the dystopian sci-fi drama See. Kumail Nanjiani (The Big Sick) lightened things up with a tight routine about his experience moving to Ohio from Pakistan before discussing Little America, and JJ Abrams introduced Sara Bareilles, who performed an original track from her upcoming series Little Voice.

This section of the presentation ended with a regal introduction to TV royalty, Oprah Winfrey. Oprah is working on a number of documentaries for Apple including Toxic Labour, a workplace expose, a multi-part mental health series and a Book Club series where Oprah interviews her favourite authors.

There are over 40 productions in the works for the Apple TV+ service, and you can learn more about them all here. This includes reviews of all the launch titles.