How much will my broken smartphone screen cost to repair?

Accidentally dropped your smartphone? You might not have to buy a new one, but you should know how much to spend on a screen repair.

So you’ve just dropped your phone, and you're panicking about having to buy a whole new device.

First step: Calm down. It's probably not that bad, because unless the screen was shattered as it went under the wheel of a steamroller, it's a simple repair to sort out, although not always "cheap" depending on the make of your phone.

How long can I ignore it?

This is a variable question, depending naturally on the nature of the damage itself. Many phones will continue to operate with a broken screen, although you are quite likely to find other people cringing as you swipe across its broken glass fragments.

The reality with any damaged screen is that delaying a repair is just delaying the inevitable, as well as opening up the possibility of more extensive damage. A broken screen will be less water resistant and more likely to suffer additional damage if you drop it a second time, possibly damaging more expensive internal components along the way. So you can take your chances and continue to use a smashed screen phone, but it's not wise for the health of both your fingers and the phone itself.

What you really need to do is get the phone repaired, and here you have a few choices to make.

If you’re particularly keen – or just cash-strapped but willing to take a few risks – it’s entirely feasible to repair a broken phone screen yourself.

For the purposes of comparison, we’re going to assume that you’ve smashed the screen of an Apple iPhone XS. It's a popular phone, which means that there's a lot of competition for third-party replacement parts, and that means that pure hardware costs are relatively low. Apple doesn't sell spare iPhone parts itself, but then no smartphone manufacturer does, so if you opt to go down the DIY route you're automatically looking at using third party components.

A replacement iPhone XS screen part on eBay at the time of writing will run from around $150 to $400, which is likely cheaper than many repair places will charge to do the repair. Of course, you’ve got to do the actual replacement work yourself. If you’re using a different phone your pricing will vary, generally by age of the phone.

Save hundreds of dollars on service costs by picking up a DIY screen repair kit from Amazon Australia.

Bear in mind that many parts sourced online are going to vary in overall quality as well as shipping time, which could be a factor if you want to get your phone back up and running quickly. You will also need to factor in the cost of tools, although some outlets will sell you a complete phone screen repair kit that includes the needed screwdrivers and lifting tools to replace a smartphone screen.

There are plenty of online guides that will run you through the basics of screen repair, including telling you which tools you’ll need if you’re possessed of both the nerves of steel and will to go down that path.

It can be markedly cheaper to replace a screen yourself, but you’re also assuming all the risk for the repair and the resultant warranty issues that may come with it. iFixit’s guide to replacing the iPhone XS screen is comprehensive if you’re inclined to go down the DIY route. 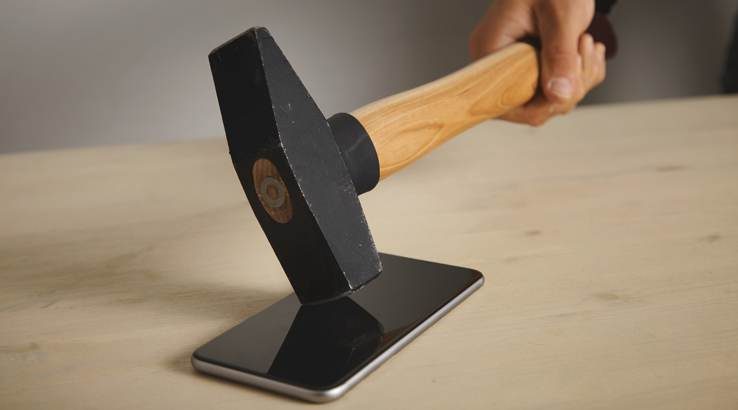 Smartphones aren’t cheap, and it’s natural to have some trepidation when it comes to messing around with internal components. Equally, you might not have the time to fix your own phone, which means it’s time to hand it over to someone who does that for a living.

Keeping with our iPhone example, there is a set replacement strategy you can adopt if you want to ensure that you’re getting properly qualified parts, and that’s to take it directly to Apple. Apple will repair or replace – and you don’t get any say in which it is – broken iPhone screens at their Apple stores, as well as through the post if you don’t live close enough to an Apple store to make that a feasible option.

Apple’s pricing varies depending on whether or not you take out its AppleCare+ extended warranty service, which allows for up to two discounted screen repairs in a given year.

It’s worth remembering that AppleCare+ doesn’t supplant standard Australian consumer protections, so if your iPhone did develop an actual screen fault through no fault of your own, you’d be reasonably entitled to a repair at no cost, although you’d need to be able to absolutely prove that nothing untoward had happened to your device and that some kind of manufacturing fault was the cause of your screen woes.

At the time of writing, Apple’s screen repair service for iPhones is priced as follows:

If you’re lucky enough to live close enough to one of Apple’s retail outlets, you can shave $19.95 off the asking price of a screen repair, because that’s what Apple charges for shipping and handling on screen repairs.

If you’re carrying around an iPhone not listed in this table, however, you’re somewhat out of luck if you want an official repair, because Apple doesn’t offer that service for older devices. The best they’ll offer you is a replacement device at an out-of-warranty repair price, or, not surprisingly, a new device at full price.

The pricing table gives you a decent baseline to work from, because Apple’s pricing sits at the premium end of the scale. A mobile phone repair shop will be working from cheaper parts, so you should pay less than Apple's asking price if you didn't opt for the Applecare+ extended warranty. While many extended warranties are arguably poor value, given the pricing difference for higher-tier iPhones, there's some sense in perhaps opting for it in this case.

What about Smartphone screen insurance?

Smartphones are an expensive proposition, so it’s not surprising that you can get insurance for them.

It may be worth checking your household or business insurance to see if your smartphone is explicitly covered, or for that matter explicitly excluded from coverage in the case of breakage accidents. It’s also worth checking your excess payment in the event of a claim, as some policies may well have excesses that are more expensive than the screen repair in the first place.

Then there are the classes of insurance that deal explicitly with damage to smartphone screens. All of the major telcos offer phone insurance schemes as detailed below.

Optus Device Protect covers mobile phones and tablets. If your device is stolen, lost, accidentally damaged or suffers an electronic breakdown or failure that is not covered by warranty, it will be repaired or replaced. This policy covers you anywhere in the world.

American Express also offers phone screen insurance as a bonus feature of its American Express Essential card, with the excess forming 10% of the claimed amount with a maximum repair cost of $500.

Prefer to get a new phone? Check out these iPhone XS plans

SPONSORED: You don't have to spend more money to earn big points.

SPONSORED: If you invest a couple of hours of time, you can benefit from some cost-effective switches that could save you big money.

It'll take you less than 30 minutes to switch to a cheaper mobile plan.

It's another win for those relying on the Optus mobile network.