Quick verdict: Google's updated Chromecast now has a full interface of apps, and while it's a little confusing parsing the differences between "Google TV" and "Android TV", it's excellent value if you just want to add a lot of apps to your existing TV. 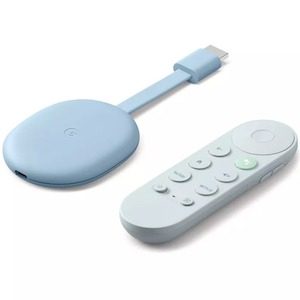 Google's Chromecast TV streaming devices have been remarkably inexpensive, remarkably simple devices to date. They were previously HDMI dongles that connect up to your TV and Wi-Fi and then just sit there, sometimes showing Google Photos slideshows but doing little else until you explicitly tell them to head to the Internet and start streaming video content, a process that was always managed from an external laptop, tablet or smartphone.

Google called this "Casting", and promoted the idea that you could do this from Google's own Chrome browser, whether that was a video file or an entire web page. The Chromecast was the easy recommendation as a dumb client device, because without a phone or browser to run it from, it really couldn't do much at all.

The new Google Chromecast with Google TV is still a Chromecast, so you can cast with it if that's your thing. But it also substantially changes the game with a full user interface that's drawn from the company's own Android TV initiative, which has brought us devices such as the excellent NVIDIA Shield TV and a remote control. The end result has its quirks, but given the fact that it's effectively replacing the already-affordable Chromecast Ultra in Google's lineup – with more functionality at the same price – it's an easy streaming solution to recommend. 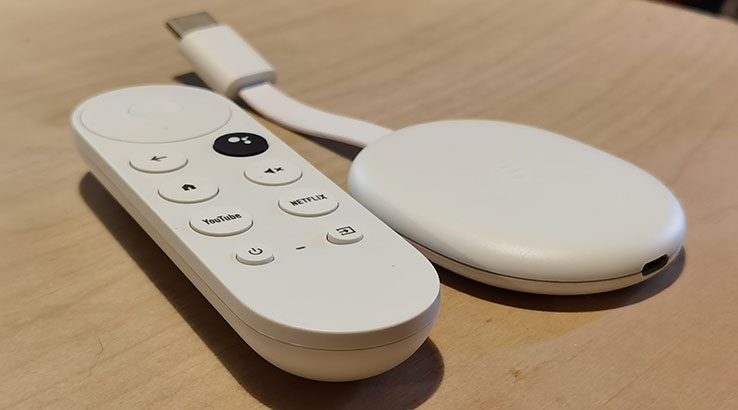 The Chromecast part – the bit that you plug into your TV via HDMI – isn't massively different to the regular Chromecast Ultra, aside from the change to a more egg-like shape and a choice of "Snow", "Sky" or "Sunrise" finishes.

That feels just a tad redundant, as most TVs have their HDMI ports at the back, so you're ideally not going to see the Google Chromecast with Google TV all that much. But I guess a little colour choice is no bad thing. The flexible cable on the Google Chromecast with Google TV means that you should be able to poke it behind any given TV, even if space is at a premium, but you'll also need to make space for power input as well.

The genuinely new part of the Google Chromecast with Google TV is the remote control. As remotes go, it's on the smaller side, and I'll be honest here and say that more than once it's vanished into my family sofa during testing. It features dedicated YouTube and Netflix buttons, as well as quick home, back, mute and Google Assistant buttons below a circular selection rocker. On the side, there's a volume control for compatible TVs and soundbars that use ARC, and there are smaller buttons at the base for TV power and HDMI input selection. For such a small remote, Google packs in quite a lot of functionality. 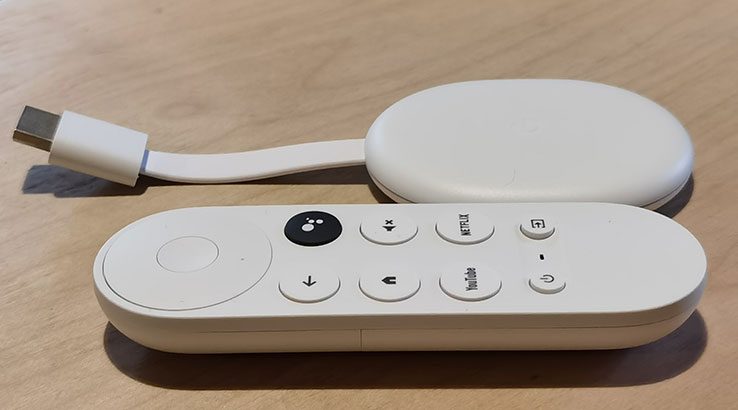 The user interface on the Google Chromecast with Google TV borrows quite heavily from the Android TV interface that you can find on some TV panels and a smaller subset of Android TV set-top boxes, such as the NVIDIA Shield TV or the Vodafone TV. That's generally my preferred platform, and at first, I figured they were interchangeable, because so many of the same apps are available across both platforms.

Out of the box, you can get up and running with all of Australia's free-to-air catchup services and the big players such as Netflix, Disney+, Stan and Amazon Prime Video. There's no Apple TV+ app for Google TV yet, even though rival Amazon offers it on the cheaper Amazon Fire TV Stick Lite and it's a feature of an expanding array of smart TVs. More surprising is that there's no direct Foxtel app, which is usually available on Android TV – all you get are BINGE and Kayo as options.

Google TV is intended to be a superset of Android TV, sitting on top of it, but there are some apps that simply haven't made the transition, and in the local Australian context, Foxtel is the most notable. You could theoretically launch Foxtel Now on a separate device and use the casting ability from that device to get your Foxtel fix, but that means that you lose the user interface and could experience the same casting confusion woes that have been a reality of the Chromecast to date.

For the asking price of just $99 (or a little more if you go for the Netflix bundled option that is available at launch), and with 4K support, the Google Chromecast with Google TV provides a good and very easy-to-navigate experience, whether you prefer the physical remote approach or you want to search via Google Assistant with your voice. Searching for content will show where individual shows or movies are available, making it easy to switch to the apps that you're subscribed to view them.

The one issue that I've had while testing the Google Chromecast with Google TV is with audio throughput. The inclusion of audio control on the remote is great, but every once in a while, when launching an app – ABC iView and SBS on Demand seemed to be the most prone – I'd suffer a complete audio dropout, only solved by rebooting the Chromecast entirely. It is still early days in the hardware and software story and it may be an issue of updating the apps or the Chromecast, or possibly a unique situation with my own set-up built around a Sonos Arc.

Should you buy the Google Chromecast with Google TV?

The Google Chromecast with Google TV improves on the Chromecast experience in all the right ways. Gone is the frustration of trying to work out why a casting set-up doesn't work, because while you can cast to the device, with inbuilt app support, there's not much reason to do so. It's 4K capable for under $100, simple enough for even the most tech-shy to use without fuss and easy to install and hide away if you don't like the look of an "obvious" streaming box in your home décor.