11 of the best ways to score a flight upgrade

Sprawl out in first class. Use these tips on how to get upgraded on your next flight.

It’s the dream to buy economy and get bumped up to first class absolutely free, but how do you make that dream a reality?

While there’s no hard and fast rule on how to score this holy grail, there are a few ways you can increase your chances of nabbing that premium economy, business or first class upgrade.

2. Bid in a flight upgrade auction: Again, this option might not be a freebie, but it does increase your chances of getting an upgrade for cheap. Many major airlines including Qantas, Virgin Australia, Singapore Airlines and Etihad let you “bid” for a seat in a more premium class. You nominate how much you’re willing to pay and if you’re the highest bidder before a designated period, you could win that premium seat. You might also like to look into bidding upgrade sites like Optiontown, which let you bid on certain benefits such as extra baggage allowance, lounge access and flatbeds on airlines including AirAsia X, SAS and Vietnam Airlines.

3. Download upgrade apps: Get notified as soon as possible so you can nab the limited number of discounted upgrades available. Due to launch later this year, Seatfrog is designed to notify those who have registered their flight with the app when the airline is offering discounted upgrades prior to departure. Those looking to step up a class can name their price through the app.

4. Don’t go for the special meal: It might seem like an odd tip, but if you can deal with the options on the onboard menu, opt out of having a special meal. These meals are linked to your seat number, so airlines generally don’t upgrade anyone who has nominated one.

6. Timing is everything: Be early or be late, they both have their benefits. If you’re early then you could be the first one to be offered an upgraded seat. If you’re late and you haven’t been assigned a seat yet, then there’s a chance that the flight has been overbooked for your class and you could be bumped up. Of course, being late has its negatives too, including missing your flight, having the upgrades take by those who arrived early or being bumped to the next flight because your flight is full. That’s the risk you have to take. 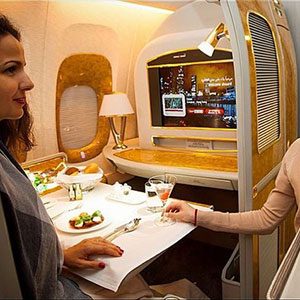 7. Make an impression. There’s a lot of advice going out about complaining about something, playing to the emotional side of the person at the counter or just generally being nice and complimenting them. We’re leaving it on this list because some say it has worked for them. Feel free to try one or the other, however there’s no guarantee it’ll work.

8. Bump yourself off the plane: If the plane has been overbooked and you can sacrifice the waiting time, nominate yourself to be bumped off the plane on the provision that you be upgraded on the next flight. If the airline can accommodate for this request, they might very well honour it.

9. Dress to impress: Some people swear by this one and it can’t hurt to look like you belong in first class when at the airline counter.

10. Don’t let a delay get the better of you: Every time I’ve been upgraded, a flight delay has played a part. I haven’t complained about the delay, I’ve either just been automatically given an upgraded ticket at the counter, or been called to the counter at the gate to exchange my ticket for one with a better seat. Make of that what you will.

11. Use your status: People with titles like Dr or Judge can sometimes be upgraded purely because of their status in society. The same goes for those with diplomatic passports.

Cathay Pacific sale: Up to 25% off international flights

Up to $100 off business class flights

Get discount on flights fees when you use the code. T&Cs apply.