An open-world action-RPG where you stalk dinobots and harvest their innards for precious loot: that's what Horizon Zero Dawn was, and of course that formula was going to work. The icing on the top was Guerilla Games lashing on an Amazonian heroine, a slew of creative weaponry, and visuals that consistently put jaws on floors. Basically, this was a lock for Game of the Year until Zelda: The Breath of the Wild came along soon after. I'm still debating that one, but I can feel myself leaning back towards HZD today, after finishing its first DLC The Frozen Wilds.

To those of you who have finished the main game and are wondering what [redacted character] has been up to, prepare to curb your enthusiasm. This is not post-game content; the nature and purpose of that person only gets fleshed out a little. What you're buying into here is a 14-hour chunk of side content; a storyline that runs concurrent to the main quest and can be merged into if you're mid-to-late campaign. It takes place in a northern chunk of the map called The Cut, a domain of the mysterious Banuk, a tribe of do-it-the-hard-way folk who live in freezing conditions and hold a local volcano in high esteem (because it's high and emits steam).

The real reason Mount Wannahockaloogie is so talkative, however, isn't because of natural thermodynamics. Your mission, should you choose to pay and download it, is to do some detective work with the colourful locals and get to the bottom of this blue-smoke spewing hill. This first phase of gaining trust of the local shamans reveals that Guerilla has done some work on improving its digital acting engine (one of the very few low points in the original game). Body movements are more fluid and natural, and the camera work feels a bit more dynamic, too.

In no time you're brought up to speed on the Daemon, a malevolent force (read: old world tech) that has spawned tentacle-like towers which angry-up the local dinobot population. You'll see these control towers out in the field, burping out purple pulses that annoyingly repair and buff nearby enemies. If you don't want the pantsing of a lifetime, it's in your interest to sneak past the creatures guarding these so you can override them it into offline status. Otherwise, a daemon machine is a force to be reckoned with, as it is more powerful, has stronger elemental resistances, and cannot be overridden to fight for you. Fair warning though: even with all towers deactivated, the Banuk fauna are still tough to kill. On a decent difficulty, you'll want to go in at level 30, minimum.

Fortunately, your tool and trick-set has been expanded to make that job a little easier. Your arsenal can be bolstered with the new Stormslinger weapon that belches electricity, and Aloy's spear allows a whole host of new modifications. Perk-wise, a fourth branch opens up called 'Traveler' and it's filled with eight new abilities. These include Mounted Pickup, the ability to scoop up items when you're riding a beast; Shard Salvager, earns you 50% more stuff from disassembles; Expert Carver, a higher chance to earn resources from corpses; Mount Repair, use shards to fix your busted-ass dinohorse; Machine Repair, do the same to resurrect overridden allies; Hoarder, increases your resource inventory by 20%; Dismount Strike, lets you insta-kill from the saddle; and Mount Repair + lets you buff your ride further. Essentially, it's a useful collection of skills that make mounted machines more enticing to use (I more or less ignored them in the main game). 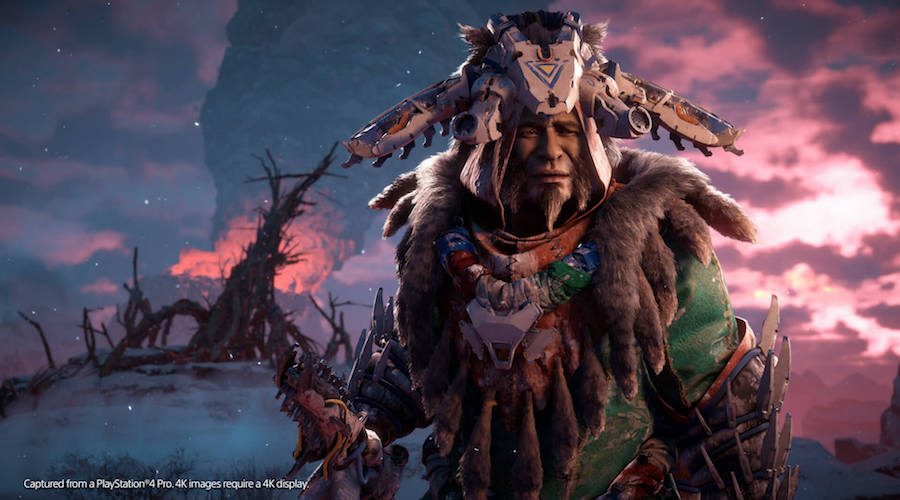 You'll need every perk you can get, to be honest, because the new enemy types offer a decent challenge, even to level 50 veterans. The wolf-like Scorcher is a particularly nasty customer, thanks to a mine launcher on his back, and the way its flaming claw attacks can shred through trees and close ridiculous distances in no time at all. Worse, the bastards can leap up cliffs and follow you like no machine in the main game ever could. Lots of fun to fight (especially when you use its own launcher against it). As welcome as this new beast is (along with two elemental variants of a grizzly bearbot) the real triumph of The Frozen Wilds is the way the Daemon makes every existing machine you know feel fresh again. It feels great to be fearful of Thunderjaws and Watchers again.

I should also quickly mention to budding photographers that the best-in-class photo mode has been expanded. First of all, Guerilla has enhanced the look of both ground-based snow and its whirling flurry flake-tech – so there are definitely winter wonderlands worth capturing. Aloy has also been given the ability to pose in a dozen or so ways. My current favourite thing to do is to take her north as far as humanly possible, trigger the 'snow angel' animation, and take a polar-oid. (Sorry.)

Story-wise, this was a pleasing romp and an interesting look into spirituality and what is a very hard-headed group of people. While it's always fascinating to learn more about the diverse tribes (or Weraks) in the Horizon Zero Dawn universe, the Banuk are tougher work than most. Their boastful pride and dogmatic views on survival (usually tested by making stupid decisions) grated on me after awhile. That, and I was really hoping this DLC would be more of a continuation of the tale – something more approaching an epilogue. Go in without those expectations, and you'll probably like it more.

We reviewed Horizon Zero Dawn: The Frozen Wilds on PlayStation 4 with a copy provided by the publisher.

All that said, the price is right, the challenge is intense, and it's always a pleasure to return to a world that's as gorgeous and dangerous as this one. The Frozen Wilds doesn't hugely mix up the existing formula, but it still is one werak worth joining.

Looking for the best price on PlayStation 4 Pro? Check out our comprehensive bargain guide here.

Hand of Fate 2 review: Decked out and ready to deal Robot House’s sentient roomba Rumu will sweep you away