There was always one thing that profoundly bothered me about Burnout Paradise. It wasn't the brutal vehicular violence (I liked that, very much). It also wasn't the fact that the developers named their sandbox “Paradise City” and then had the gall to not fill the play-space with green grass nor girls that are pretty.

No, what disturbed me then (and now) is that there's no human driving any of these automobiles. It's... unsettling. Like you're playing the psychotic version of Disney's Cars.

Fortunately, you'll not have time to focus too much on all that when you're gleefully ripping down the highway at 300kph with your exhaust on fire. This remastered version of Burnout Paradise may be a decade old, but few games can match its sheer velocity and addictive risk-reward gameplay loop – especially now that it's shredding past your eyeballs at 4K, 60fps. The closest recent analogue would have to be Sony's Wipeout Omega Collection, though (and thankfully) the road-based Paradise is less of a stomach-churning rollercoaster.

Better yet, and to add fuel to the NOS-fire, you're basically handed all of the fastest DLC cars from the get-go. Criterion had some wild ideas for bonus rides, too, thanks to the presence of off-brand versions of Knight Rider's Kitt, the Back To the Future De Lorean (complete with hover conversion), and even Ecto-1 from Ghostbusters.

Having instant access to those top-tier rides makes the early-game grind feel like a cinch now, especially when you're also handed “super boost” hotrods, novelty toy rides, and hair-raising superbikes. Weirdly, the latter do come with human riders. Please don't ask how that works. You'll just get my OCD started...

Any vehicle can attempt the many events dotted around the intersections in this open city, but you're really going to need to switch into skill-specific whips in order to be competitive.

Stunt events require adaptive vehicles that have shallow nitrous pools, but allow you to hammer out small speed bursts for snatching air off ramps and sneaky drifts. The gladiatorial Road Rage and cat-and-mouse Marked Man events ought to be taken on with Aggression vehicles that sacrifice speed for armour. Last but not least, point-to-point Races and Burning Routes are best undertaken with vehicles that allow you to chain together “burnouts” (basically you hold your boost button in, no matter how insane the traffic conditions are).

The latter is my personal favourite as taking risks effectively feeds your speed until you either win the event or end up looking like something the Terminator would poop out.Burnout Paradise Remastered will never be mistaken for a current-gen title. It isn't the most jaw-dropping graphical update I've ever seen, but it's a damn sight better than it was on PS3 and is positively bloated with content. It also stands up quite well in the online space, too, thanks to flawless PvP racing and some more passive “own the street” challenges that more solo-minded players with no interest in match-making can enjoy.

I'm thankful that Paradise was resurrected, but there are a few stalls here and there owing to antiquated game design.

For one thing, Paradise City is bloody huge, but lacks a fast-travel function. Hell, it even lacks a basic “retry event” function. You can be racing across town for three minutes, screw up a turn, and then you'll have to do the commute-of-shame back to the starting line for a re-attempt.

In the mid-to-early game this won't be seen as an issue – you'll simply cut your losses and try a different event nearby. However, get to the final stretch of the game where only a handful of events remain, and I guarantee it'll piss you off. 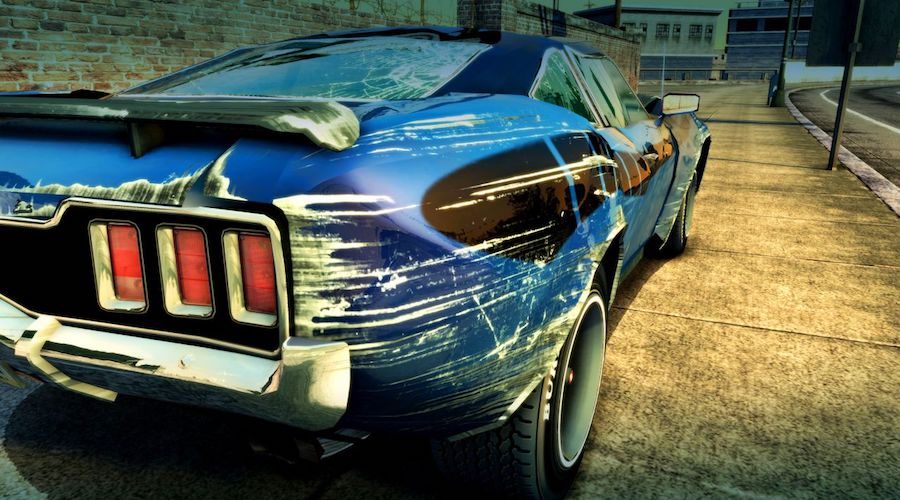 Modern gamers may also take issue with Burnout Paradise's approach to navigation. In the early days of the Burnout series, the streets were cordoned off with large impassable chevrons – here, Criterion decided to let the players find their own way through serpentine streets to the checkered flag.

This approach – which requires a lot of frantic mini-map glances, as opposed to following a painted GPS line on the streets – won't be for every taste. Obviously the problem of dying due to poor cross-street selection is exacerbated by the lack of fast retry.

It's hard to give Burnout Paradise Remastered a pass on these repeated mistakes (mostly because myself and other critics complained about them loudly, like, ten years ago). Even still, it's tough to hate this restored classic. Put simply, there's been nothing like this big, bombastic arcade racing king since 2008.

Criterion's talents were siphoned off into the Need For Speed franchise and although the breakneck speed of Burnout endured, the car-imploding auto-violence was thoroughly neutered.

Beneath the fancy new paint, Burnout Paradise Remastered is a junkyard dinosaur in many respects, but it's got old-school charm and teeth like nothing else out on the market. Do yourself a favour and go get bit.

We reviewed Burnout Paradise Remastered on PlayStation 4 with a copy provided by the publisher.

Runs like a dream in 4K and is overflowing with great, novelty-filled content. It's just a shame they painted over a decade's worth of rust in spots.