The best pressure cookers in Australia 2020

We’ve selected the 6 best pressure cookers in Australia based on customer and professional reviews.

The best pressure cookers in Australia

Our editorial team selected the products on this list based on actual customer reviews, expert reviews and our own experience. For each category, we carefully selected parameters based on our research and identified the products with the highest review score within those parameters. 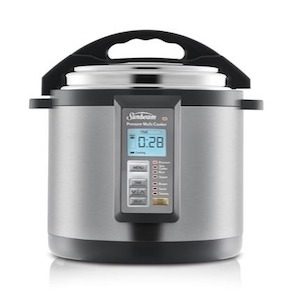 The overwhelming consensus from user reviews is that the PE6100 is extremely easy to use, with a clear, informative LCD display. The delayed start and keep warm functions also make cooking around your day-to-day life convenient.

Its versatility is routinely praised as well: along with the ability to cook curries and stews in a fraction of the usual time, it also works as a slow cooker, a rice cooker and a steamer, and it can even sauté and brown meats ahead of stewing, all in the same pot. That's an awful lot of functionality for less than $150. 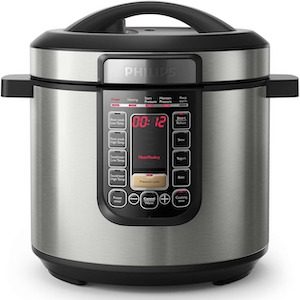 Holding a 4.8-star rating on Google from 291 reviews, the Philips All-In-One Cooker is the highest rated pressure cooker available in Australia for less than $200. JB Hi-Fi customers also rate it a 4.9 (53 reviews) while The Good Guys customers have awarded it a perfect 5 (94 reviews).

Reviewers commonly cite the speed of the pressure cooking as the All-In-One's highlight – its 1,300 watts of power making it roughly 25% faster than many comparable units. Users also praise its simplicity and its easy-to-clean pot, though there are a few reports of it scratching after prolonged use, so make sure not to use metal utensils!

If the idea of pressure cooking scares you, multiple reviewers say the auto pressure release valve and the abundance of safety features help alleviate a lot of that worry.

As a multi-cooker, there's also a raft of options for when you want to draw out the cooking process. Aside from the fairly ubiquitous slow cooker function, you'll find modes for rice, baking and even yoghurt making. 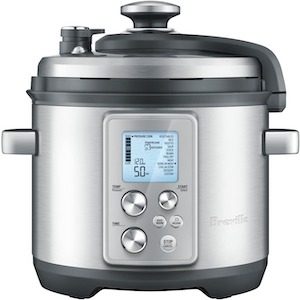 Breville's The Fast Slow Pro Cooker holds a 4.6-star rating on Google from 339 reviews. Its high user rating in combination with Breville's close 2nd place finish in our Finder Awards, plus a smart premium feature not seen elsewhere, make it our choice for the best high-end pressure cooker.

User reviews are overwhelmingly positive about the food cooked in The Fast Slow Cooker. The most commonly cited reason for this: the two sensors inside the pot, one at the base and one at the top, which measure temperature and pressure and then automatically adjust them on the fly to squeeze out the most flavour. It'd almost sound like a gimmick if so many people didn't swear by it.

There are 11 preset modes for everything from stews to shanks, and you can even create and save your own custom settings for your signature dish. The clear, informative LCD screen also garners lots of praise. 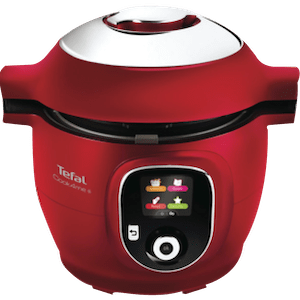 Tefal's Cook4Me+ has a 4.8-star rating on Google from 532 reviews, making it one of the highest-rated pressure cookers on the market. The vast majority of user reviews cite the 150 preloaded recipes as the headline standout feature, making it our pick for people who don't love cooking and want the meal-making process to be as simple as possible.

Essentially, the Cook4Me+ guides you through recipes via on-screen prompts that amount to little more than plopping ingredients in the pot in the right quantities. If you don't want to think or labour over the cooking process, this is your best bet.

More than 100 of the programmed recipes cook in less than 15 minutes. Making things even simpler, if you want to prepare serves for two or four instead of the standard six, the display automatically adjusts the quantities for you.

If you do decide to freestyle a bit more in the kitchen, there's a variety of manual cooking modes to play with as well: steam, brown, simmer and reheat. 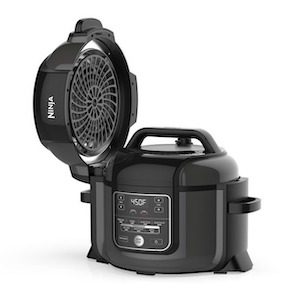 The Ninja Foodi OP300 holds a stellar 4.8-star rating on Google from more than 900 reviews, making it a hugely popular pressure cooker. But it's the inclusion of a few cooking methods not seen in other pressure cookers that make it our choice for most versatile on the market.

Firstly, the Foodi is a fast, efficient pressure cooker that reviewers love. As with all modern multi-cookers, it comes with a slow cook mode and familiar specialised settings therein, like rice mode and steaming. But what truly sets the Foodi apart is its air fryer mode – it's currently the only multi-cooker with this feature.

This allows you to cook french fries, battered fish, chicken nuggets and more without the need to drench them in oil, making them significantly healthier. A large proportion of reviewers single out the air fryer as their favourite feature. There's also a "TenderCrisper" setting used for searing meals once they've been pressure or slow cooked, adding a nice crispiness to dishes like pulled pork or casseroles. 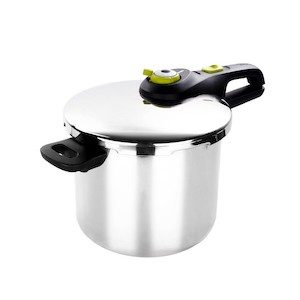 Despite offering a similar cooking experience and being of comparable craftsmanship, Tefal's cooker can be found for less than half the price of the Fissler.

If you're looking for old-school simplicity and don't need any of the digital bells and whistles of an electric cooker, Tefal's Secure 5 Neo has you covered. Reviewers praise the stainless steel construction, the included steaming basket, the ease of use and the abundance of safety features to curtail steam burns and pressure-related accidents. For a stovetop pressure cooker, it's also remarkably quiet. The only real downside is that the lid can't be run through a dishwasher.

6
Winners chosen
Was this content helpful to you?
Thank you for your feedback!