Slow cooker vs pressure cooker: Which is better? 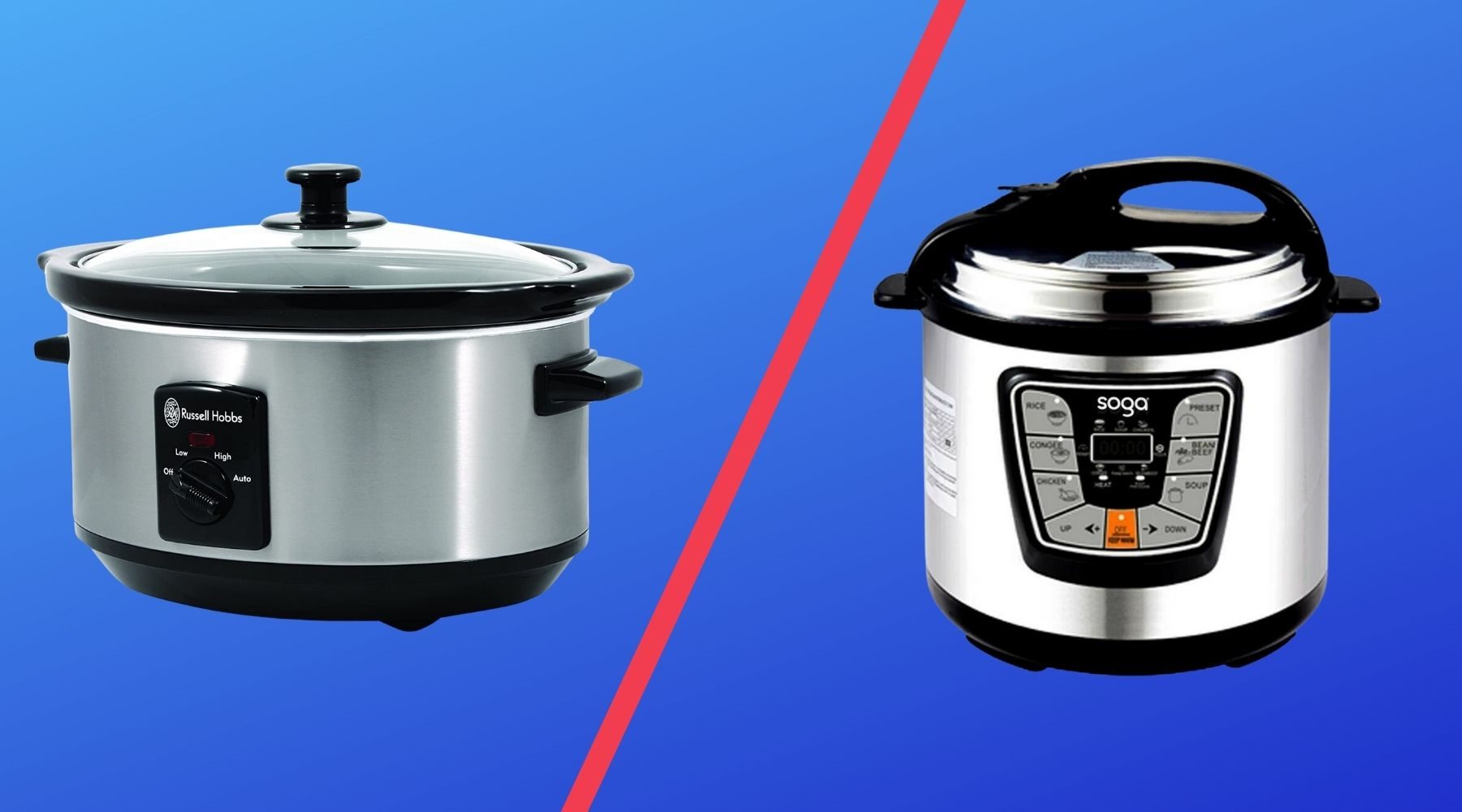 Based on taste, convenience, versatility and other factors, does the slow cooker or the pressure cooker come out on top?

If you're after a fancy new gadget to spruce up your kitchen, you may find yourself entering into the slow cooker vs pressure cooker debate. These devices are similar enough that you're unlikely to want both, but there are still plenty of differences to unpack between the 2.

To answer the question of whether a slow cooker or a pressure cooker is more convenient, let's take a look at how these 2 products function. Slow cookers are usually countertop appliances with built-in heating capabilities. They use low heat to cook your food, well, slowly. Over the course of about 4–8 hours, they can produce delicious soups, stews and meat dishes.

On the other hand, pressure cookers use highly pressurised steam to cook food much more quickly than other cooking methods. Something that takes 3 hours in an oven could be cooked in a third of that time in a pressure cooker.

So, pressure cookers are a much speedier version of slow cookers and they must be more convenient, right? Well, the downside of the pressure cooker here is that they are a good bit more hands-on than slow cookers. Slow cookers can be left completely unattended, allowing you to prepare your ingredients in the morning and come home to a perfectly cooked meal.

Electric pressure cookers must be turned off or have their pressure released when they are finished cooking. Otherwise, your meal will be overcooked, which can be a common fate when using a pressure cooker. And stovetop pressure cookers are even more hands-on, requiring you to be in the kitchen the entire time your meal is being prepared to regulate temperature and observe the cooking.

So while pressure cookers are a significantly more expedient appliance, slow cookers are preferable for those who want to remain hands-off while cooking, or if you want your meal to simmer away while you're at work or in bed. 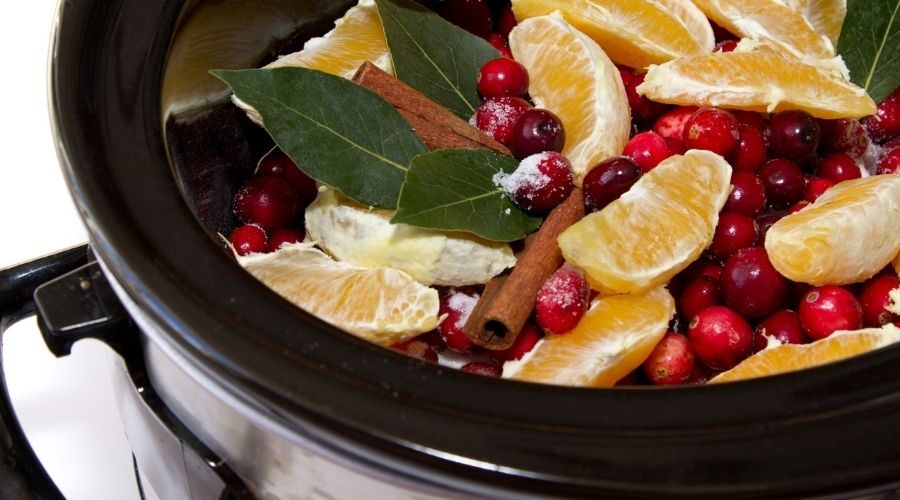 Slow cookers and pressure cookers are often used for similar kinds of foods, including stews, soups and braises. They can also be used in more out-of-the-box ways to prepare bread, desserts and more. Slow cookers are perfect for preparing root vegetables and tougher cuts of meat, as the lengthy cooking time makes these foods decadently soft.

Pressure cookers can be used to brown off meats and vegetables, but slow cookers cannot due to their lower temperature. This means that if you're using a slow cooker, any ingredients you want to come out seared need to be prepared in a separate pan.

There are many ingredients that are not appropriate to spend long periods in a slow cooker, including pasta, fish and dairy. You'll need to add these ingredients late in the cook. There are fewer limitations for pressure cookers as they're perfect for cooking pasta, rice, lentils and faster-cooking meats such as chicken breast and fish.

While pressure cookers are better for throwing all your ingredients into and getting a great dish at the end, with a bit of extra work you can make up the difference using a slow cooker. For example, you can add more seasoning at the end of your cook, or brown your meats and vegetables in a separate pan.

But pressure cooking fans would retort that these methods are simply papering over the failings of the slow cooker. For example, adding some salt at the end of your cook is no true substitute for allowing complex flavours to develop in a pressure cooker.

As you can see, this debate can go on and on. While many chefs and foodies would give pressure cookers the edge, ultimately your recipe and personal skill as a cook are likely to be more significant determining factors than the device you are using. 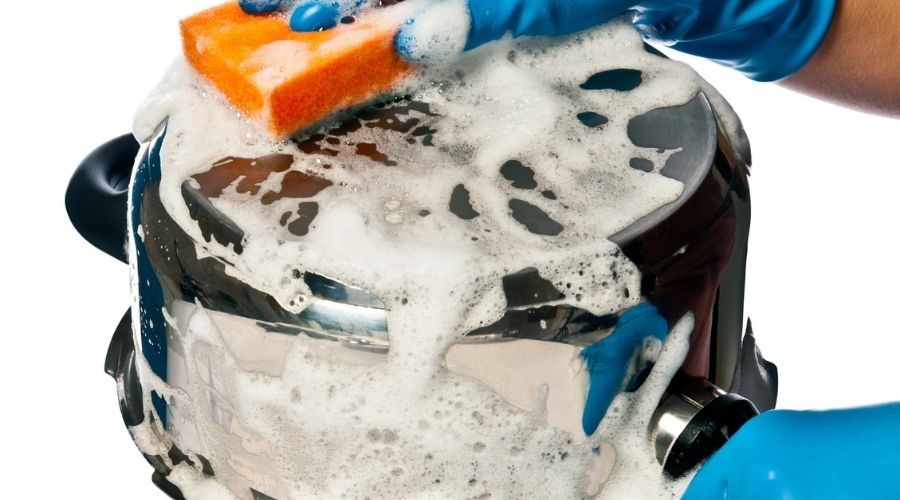 Of the 2 appliances, pressure cookers are much trickier to clean. This is particularly true of countertop versions. They require all components to be disassembled, cleaned and then reassembled, which can be difficult for new owners. Some of the fiddlier elements of a pressure cooker include the steam release handle and anti-block shield.

Slow cookers are much simpler appliances and are easier to clean. Only the vessel and lid should require cleaning after each use, while the base can simply be wiped down.

Most components of both slow cookers and pressure cookers are dishwasher-safe. Be sure to check this for your device before putting anything in the dishwasher.

Unsurprisingly, slow cookers are the much cheaper option of the 2. Prices range from as low as $20 up to $300 for an exceptionally premium model.

Pressure cookers can range from $50 for a very low-end product up to $500 and beyond for commercial options. 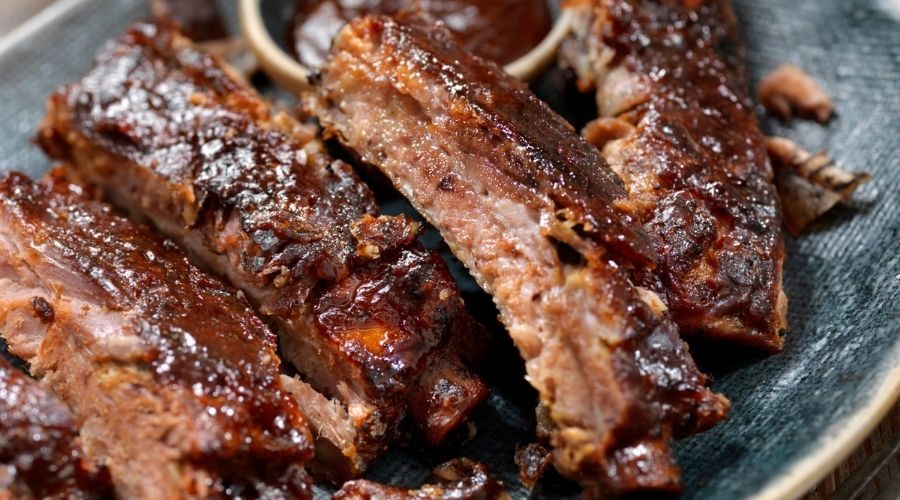 As is often the case with product comparisons, personal taste is the ultimate deciding factor. If you're a culinary fiend, you might find yourself agreeing with many other foodies that pressure cooking is superior, but there's no way to really know until you've extensively tried both methods.

If convenience is of greater concern to you, you should definitely opt for the electric, countertop variant of either appliance. Does preparing your ingredients in the morning and coming home to a warm, nourishing meal sound like your dream? Opt for a slow cooker.

If you'd prefer to get all your cooking done in 1 go and are willing to take part in a slightly more involved process, go for the pressure cooker.

If you've chosen to purchase a slow cooker, check out one of the excellent deals below. 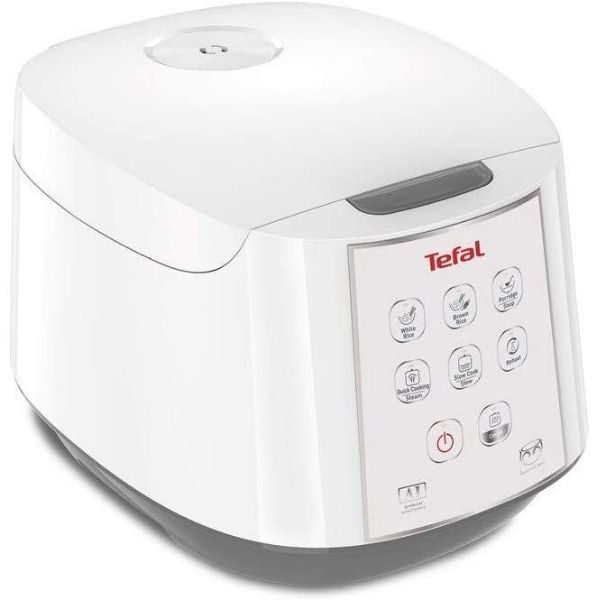 39% off Tefal rice and slow cooker 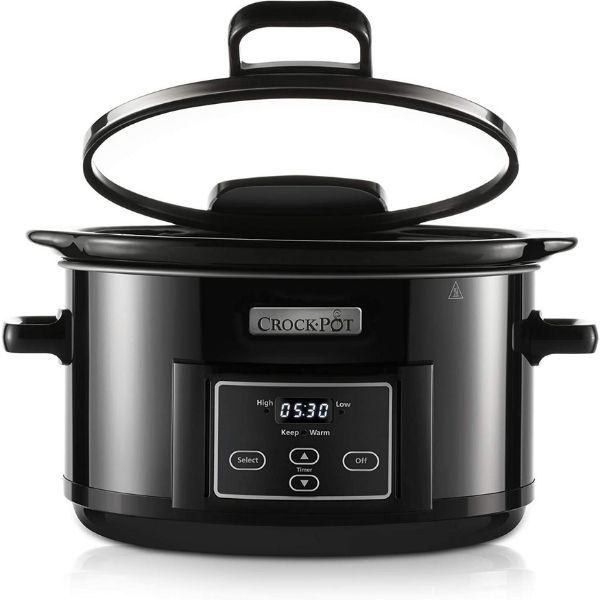 With a digital timer and 3 heat settings, this slow cooker can handle everything from roasts to desserts. 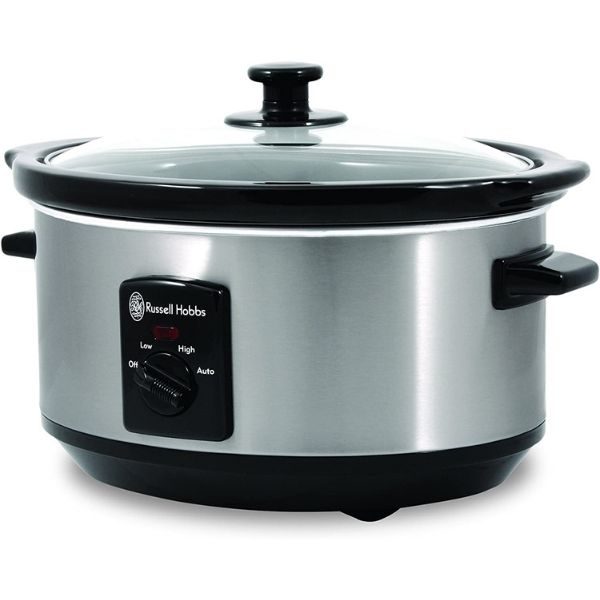 This great-value slow cooker is an excellent option to spice up your meals at a low price.

If you're more enticed by the possibilities of a pressure cooker, these great prices are for you. 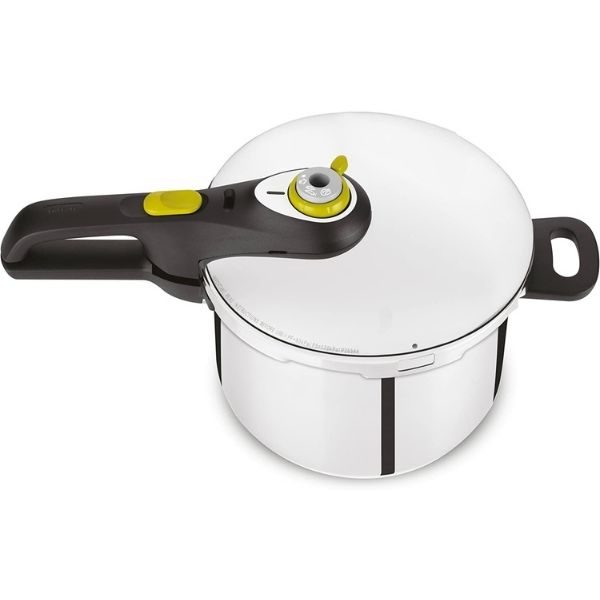 Stovetop pressure cookers allow for unparalleled control over your dish. 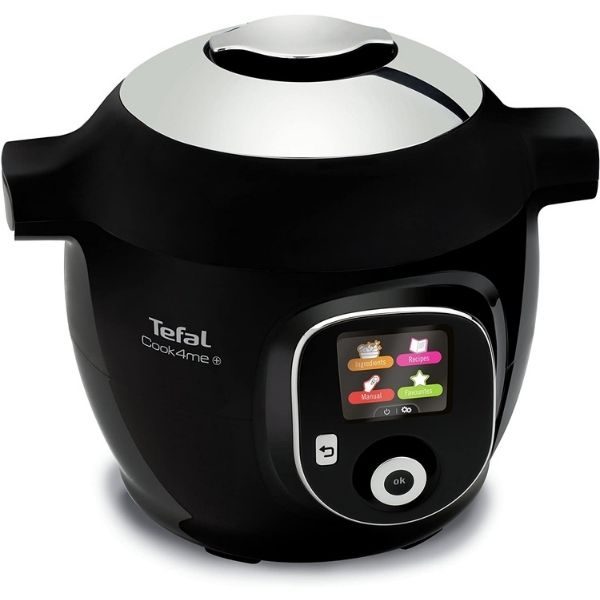 With 150 built-in recipes and a 6-litre capacity, you can enjoy delicious pressure-cooked food no matter your skill level. 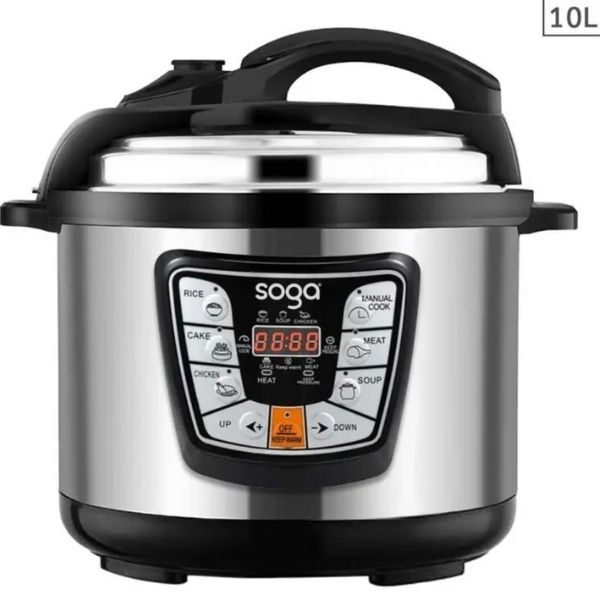 The enormous capacity of this pressure cooker makes it perfect for any gathering or party.

Keen for more information on your next kitchen or home appliance? Head over to Appliance Finder.