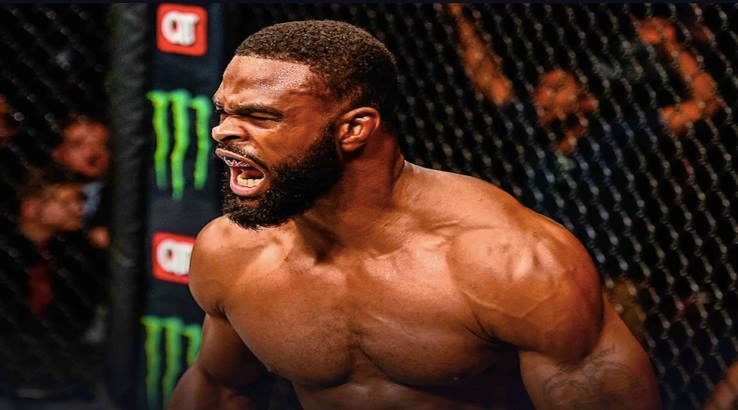 A true UFC grudge match finally takes place when Colby Covington meets Tyron Woodley in the Octagon. Catch it all live via these options.

SUMMARY: UFC Fight Night is live and exclusive to ESPN and UFC Fight Pass. Your best option to watch is on Kayo Sports. You can watch Covington vs Woodley for free using this 14-day trial. This gets you access to all its unique features and 50 additional live sports.

Grudge matches in the UFC can sometimes appear a little manufactured. But there is no denying the ill will between Colby Covington and former welterweight champion Tyron Woodley ahead of their headline clash this weekend.

The brash Covington, a 32-year-old who calls himself "Chaos", is heavily favoured to prevail. Woodley, 38, lost consecutive fights prior to this match-up and is widely considered past his prime. That will be determined on Sunday (Australian time).

On a solid card, the co-main event is between welterweights Donald "Cowboy" Cerrone and Niko Price. The highly touted and undefeated Khamzat Chimaev will also meet Gerald Meerschaert in a middleweight bout.

When is UFC Fight Night: Covington vs Woodley?

The 8-fight preliminary card gets underway at 7am AEST on Sunday 20 September at the UFC APEX in Las Vegas. The main card is scheduled to start at 10am AEST with a further 6 bouts. You can see a full breakdown of the UFC schedule here.

How to watch UFC Fight Night: Covington vs Woodley

The broadcast home of UFC Fight Nights in Australia is ESPN. The preliminary card and main card are both on the broadcaster. That means Foxtel iQ, Foxtel Now, Kayo Sports, UFC Fight Pass and Fetch TV are all options. For more detailed information, we have a UFC viewing guide for you.

Kayo has a 14-day free trial for new users. After that, Kayo starts from $25 a month for the Basic subscription, which gives you access to 2 screens or devices at once. A Premium subscription gives you a third device for $10 more per month.

Boasting more than 50 sports, Kayo also has a range of special features unmatched by other services. SplitView allows you to watch four events on the same screen. Interactive Stats, No Spoilers, Key Moments and Kayo Minis are also among the options.

Kayo is compatible with Android and iOS devices, PC, Mac, Apple TV, Telstra TV, Android TV, Chromecast and Samsung TV (2017 or later). It's all in our Kayo Sports review.

Foxtel Now is the pay TV operator's digital streaming service. To access Foxtel Now, you need to subscribe to the Essentials pack and the Sport pack, a total of $54 a month. Foxtel Now also has a 10-day free trial.

You can sign up to UFC Fight Pass to access Covington vs Woodley for either $10.99 a month or $104.99 for a discounted annual pass. It's compatible with smartphones and laptops, Xbox One and Xbox 360, Apple TV, Chromecast, Roku, Samsung and LG smart TVs.

Who will win UFC Fight Night: Covington vs Woodley?

There has been a feisty build-up to this showdown, with the fighters holding separate press conferences to keep them apart. Both media events then ended up taking a political slant, to add a little extra spice to the dislike between the pair.

Woodley is an outspoken supporter of the Black Lives Matter movement and repeated the phrase repeatedly when he met the press. He takes on Covington, a devoted follower of US president Donald Trump who wore a Keep America Great hat to his conference.

Both fighters have a wrestling background and have also improved their striking over the years. Woodley (19-5 record) looked a shell of himself in defeats to Kamaru Usman and then Gilbert Burns, although he has since stated personal issues impacted his performances.

Covington (15-2) had a 7-fight winning streak stopped by Usman in December last year, his last appearance in the Octagon. If "The Chosen One" Woodley can rediscover the fire that made him one of the most feared men in the UFC, he clearly has the ability to win. But we're leaning towards "Chaos" backing up his pre-fight bravado in a victory by decision.