How to watch T20 World Cup live online in Australia

Originally scheduled for Australia in 2020, the latest T20 World Cup is here, a year later and now in the UAE.

Following in the footsteps of the Tokyo Olympic Games and Euro 2020, the ICC Men's T20 World Cup is here, 12 months after it was originally scheduled.

The coronavirus pandemic played havoc on world sport over the past year, but the sports are aiming to get the last laugh, with most of the world's major events eventually going ahead in one form or another.

This tournament was to be held in Australia in 2020 before it was shifted to India and then finally the United Arab Emirates and Oman. Two-time champions the West Indies are the cup holders and 15 other nations are aiming to pry it from their grasp. Here are all the details you need to tune in.

The action gets underway on Sunday 17 October and goes for almost a full month, culminating with the final on Sunday 14 November.

Where is the T20 World Cup being held?

As stated the pandemic meant this competition was moved from Australia to India and then to the UAE and Oman. Australia will now host the 2022 edition. There are 4 venues being used this time around, located in Dubai, Abu Dhabi, Sharjah and in Muscat, Oman. Dubai International Cricket Stadium will host the final.

How to watch the T20 World Cup

In Australia, the World Cup is being televised by Fox Cricket. That means Foxtel iQ, Foxtel Now and Kayo Sports are all options for catching what will be a month of outstanding cricket action.

Considering the length of its free trial, its special features and its price, we think Kayo Sports is the way to go. For more information, read our Kayo vs Foxtel comparison. The first round (see the format below) was on Kayo Freebies, the rest of the competition is on the main Kayo Sports platform and Foxtel.

There are a total of 45 matches in this year's event and you have been able to watch them all, live and on demand, on Kayo Sports. If you are yet to try it, Kayo has a 14-day free trial.

Once you have completed the trial, subscriptions for Kayo are $25 a month for the Basic option, where you can watch games on 2 screens or devices. The Premium option is $10 more per month and gives you 3 screens.

On top of the Men's World Cup, Kayo has every Australian Test match, all of the WBBL live and a host of ODI and T20I competitions. And it's not just cricket; Kayo has access to more than 50 sports.

Kayo also has a number of special features, such as Kayo Minis, which will be available throughout the tournament. Shortly after matches have completed, you can watch a condensed version. Other features include SplitView, Interactive Stats and a Key Moments Timeline. We have put together a full review of Kayo Sports for you.

This blows the monthly bill out to $74 per month. Foxtel is also the only broadcaster in Australia that currently offers users access to 4K sports content which is a bonus.

You may also find you're up for some installation costs, although Foxtel IQ deals are regularly available.

Foxtel Now is the pay TV giant's digital streaming service. You have to subscribe to the Essentials pack in addition to the Sports pack which costs $54/month. So while it's cheaper than IQ, you're still paying double the price of Kayo Sports to get your cricket fix.

If you haven't tried it previously, Foxtel Now offers a 10-day free trial. We have also put together a full Foxtel Now guide which includes the list of compatible devices.

What is the T20 World Cup format?

The T20 World Cup utilises a slightly unusual format. First up, there were 8 teams that competed in round 1. They were former champions Sri Lanka, plus Bangladesh, Ireland, Netherlands, Papua New Guinea, Scotland, Namibia and Oman. From that group, Sri Lanka, Bangladesh, Scotland and Scotland progressed to what is called the Super 12s.

There the top 8 teams in the ICC rankings join the fray. Split into 2 groups of 6 countries, they play another full round of matches until the top 2 sides in each pool qualify for the semi-finals. The victors in the sudden-death semis qualify for the final on 14 November.

Who is competing in the Men's T20 World Cup? 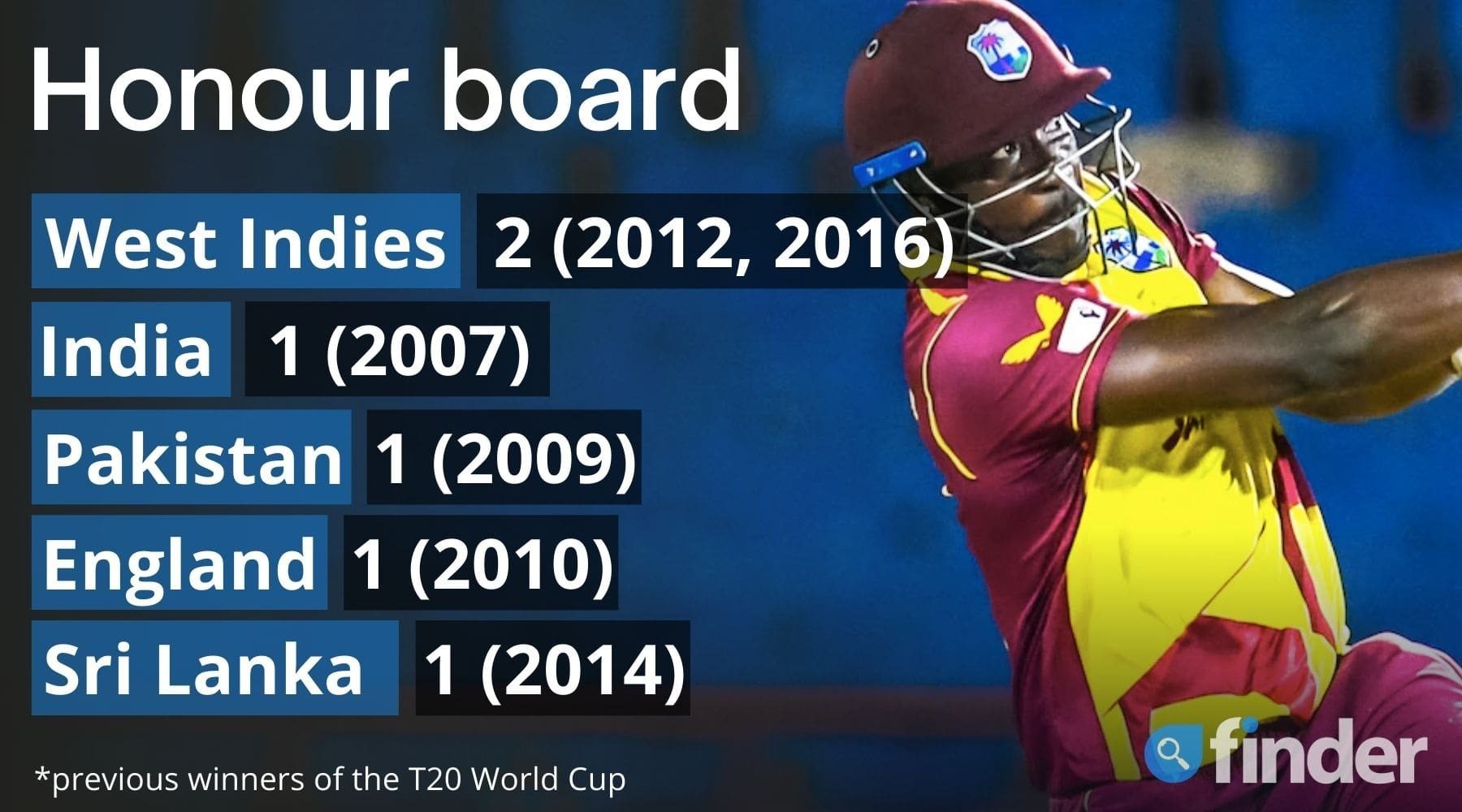 Who has won the T20 World Cup?

Since the competition started back in 2007, the West Indies has been the most successful team. The Windies are the only outfit with 2 titles to their name, taking out the tournament in 2012 and 2016. A number of nations have won it once, namely India, Sri Lanka, Pakistan and England.

Australia has a poor record in this format of the game. The Aussies' best performance was a loss to the West Indies in the 2010 final, which was held in Barbados.

England are the top-ranked side in T20 cricket right now, but the second-ranked Indians enjoyed favouritism here. That hasn't panned out, with the Indians eliminated before the semi-final stage. New Zealand then stunned the English in the first semi-final with a late flurry of runs to progress to the final.

We also thought pre-tournament the Australians would find some form in this competition and they are taking on Pakistan in the second semi-final.

How to watch England vs Hungary World Cup qualifier online Premier League: 5 key moments to watch for this weekend