Where to watch and stream BBL finals live in Australia

There are multiple options when it comes to live streaming Big Bash League T20 cricket in Australia, be it for free or through a premium service.

So what does BBL stand for? Well it's Australia's Big Bash League. Australia's T20 cricket competition is seriously big. We're not just talking about the sixes, the fours or "Lynnsanity", we're talking about you, the fans.

In terms of actual bums on seats, the BBL is among the most attended sporting league in the world, beaten by the likes of the English Premier League, Bundesliga, NFL and IPL. While attendance was down last season, the new overseas signings should provide a boost.

That said, you won't be able to make your way to every BBL T20 cricket game and thankfully this sporting soap opera is live streamed every night.

It was a massive season last year with an all-Melbourne final. It ended with the Renegades edging out the Stars. This year things are even more exciting with the likes of South African superstars Dale Steyn and AB de Villiers joining the competition.

Where to watch BBL live T20 cricket in Australia

So, what are your options if you want to relax the night away to the cries of "howzat!"? The rights to stream the Big Bash T20 cricket rest with Foxtel; specifically, all 61 games are shown live on Fox Cricket.

In addition to the actual game, there is pre- and post-match analysis, highlights, historical games, chat shows and more available on the channel for cricket fans to feast on. But there are now multiple ways to access Fox Cricket and as you will see, significant price differences.

The one slight here is Foxtel and Channel 7's agreement. Foxtel has a deal to provide Channel 7 with a few games and all finals matches live, but it's still roughly 30% less BBL.

Your only free-to-air option when it comes to watching the BBL is Channel 7. Out of the 56 regular season BBL matches, Channel 7 only has the rights to broadcast 40 matches. So while it may be okay for the casual fan, true BBL supporters are best suited to one of the below options. That way you can see every single ball and boundary live and ad-free.

No, you cannot stream Big Bash cricket on 7plus

Let's start with perhaps one of the more confusing aspects of the live streaming Big Bash T20 cricket experience. Last year, Channel 7 acquired the rights for the BBL on free-to-air TV from Channel 10. However, it did not get the rights to stream the BBL online.

Those rights went to Foxtel, which we will discuss more below. Heading to the 7plus app or webpage will only give you a live scoreboard to watch update slowly. Boring!

Launching in late 2018, Kayo Sports has taken the live sports streaming experience in Australia to the next level. Firstly, it works a treat across a host of platforms and is compatible with iOS, Android, Apple TV, Telstra TV, Samsung TV (2018 or later) and Android TV in browsers as well as Chromecast or AirPlay. Oh and we should mention you've got over 50 sports to pick from.

It has all the content from 13 of Foxtel's 21 sports channels (Fox Sports x 8, ESPN x 2, beIN SPORTS x 3). All the content is delivered in HD. It has a stack of live sports streaming features such as SplitView (watch four sports at once), alternate camera angles, Interactive Stats, a Key Moments Timeline and Kayo Minis.

Subscriptions to Kayo start from $25/month and let you watch from two devices at once. If you're after a third simultaneous stream then you can upgrade to the Premium subscription which is $35 monthly. The best part of all is you can use this 14-day free trial and test it all out.

Get your timing right and you can watch multiple BBL games as well as the Australia vs New Zealand Test series for free. 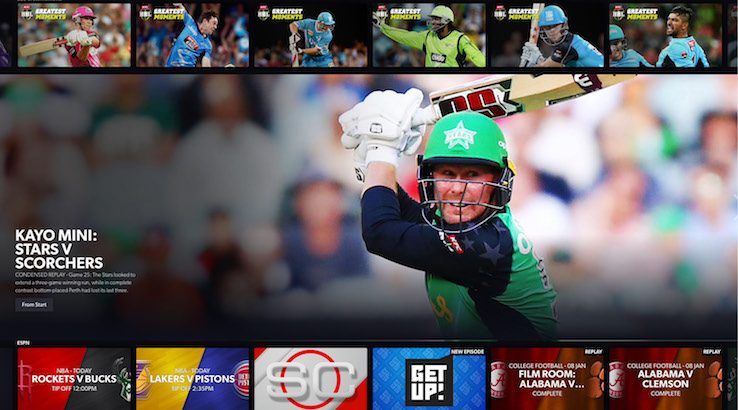 If you want a more traditional pay TV experience, Foxtel and its iQ4 set-top box is where you will find the BBL. Its big selling point over Kayo is the ability to watch sport broadcast in 4K quality, assuming you have a compatible TV. You also get access to tons of non-sporting content and the ability to record to the iQ box. It's also easy to watch it on your home TV, without needing to use a third-party app or Chromecast.

However, it all costs money. To get the BBL on the HD sports channels $25/month, you first need to subscribe to the Foxtel Plus pack $49/month. It's not possible to just get the sports channels through Foxtel.

The install of iQ4 is also quite invasive to your home, too. Depending on whether there is a free deal at the time - costly and takes time. At least the Sports HD pack has an additional three channels than what we find on Kayo Sports (EuroSport, Sky Racing x 2).

Sitting between Kayo Sports and Foxtel iQ is Foxtel Now. It is a streaming alternative to the Foxtel iQ service, with all the same channels and the option to have a small, feature-light and non-invasive Foxtel Now box under your TV. This costs $99 upfront and doesn't record or do 4K, but it does allow you to have other apps like YouTube and cast from a mobile/tablet device through to your TV.

However, you don't need the box. The Foxtel Now app is available on a host of devices, such as iOS, Android, Android TV, some Smart TVs (Samsung, LG), Telstra TV, PC, Mac, Chromecast, Xbox One and PlayStation 4. In total your bill is split among the Sport at $29/month and Essentials pack for $25/month.

Unless you're desperate for 4K BBL or want the non-sporting channels, Kayo Sports is a clear winner as your best destination to stream (and indeed just watch) BBL. With tons of new features expected to roll out through 2019, it's expected to get even better, too. With no-lock-in contract, it's a no-brainer to at least trial the service.

It's also worth noting that all of the above options except for Channel 7 include the out-of-game BBL content. So, press conferences, chat shows, pre- and post-match analysis and so forth. No matter which option you choose, you will get the maximum amount of Big Bash live stream content.

No, you cannot stream Big Bash cricket on the Cricket Australia Live app

In a somewhat surprising move, Cricket Australia sold the Big Bash T20 cricket streaming rights to Foxtel in full, nullifying its own ability to show the cricket through the official app. Instead, the Cricket Australia Live app now focuses on domestic cricket. So, don't go looking to the official site for answers.

When does the BBL start?

Mark your calendars for 17 December 2019, when Brisbane Heat host Sydney Thunder at The Gabba. It starts at 6:10pm local time (7:10pm AEDT). The season runs through to 8 February 2020 when the final is played.

If you're interested to learn more about who is playing this year, as well as when and where each and every game of the season is on, check out the 2019/20 BBL schedule. We also have some incredible Big Bash statistics for you to feast upon.