Learn how to choose a smoke alarm that meets your needs while complying with state laws. 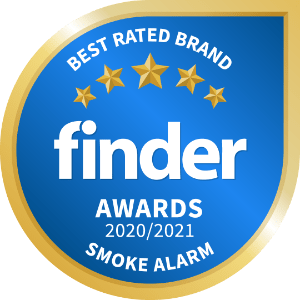 With the top rating for ease of use, design and value for money, First Alert has taken out this year's smoke alarm category award.

In some parts of Australia, you can choose between two different types of smoke alarms: ionisation models and photoelectric models. However, many states recommend the use of a photoelectric alarm.

Ionisation smoke alarms are able to detect small particles that enter an ionisation chamber. When the number of particles in the chamber reaches a certain threshold, an alarm sounds. Unfortunately, the types of particles detected by ionisation alarms are generally only created when there is a flaming or very hot fire. These fires don't produce much smoke but do burn very quickly. A slow-burning fire that does not produce large flames or visible particles but does produce dangerous smoke may not be detected by an ionisation alarm. Ionisation alarms also frequently pick up flames and heat from cooking, so it is not recommended to install one near a kitchen.

Some smoke alarms are powered by a battery, while others are hardwired or mains-powered. Hardwired models are typically installed in a house during construction as they need to be connected directly into the household power line. These units also include a backup battery in case of power loss. Depending on where you live, you may be required to have a hardwired smoke alarm with a backup battery installed in your home.

No matter which type of alarm you have, the batteries will need to be replaced regularly. For those of us who forget when it's time to change the batteries, battery-powered models signal an alert when the batteries are running low.

Just about every home in Australia is legally required to have at least one smoke alarm. Australian Standard 3786 dictates the rules each residence must follow. However, some states use different versions of standard 3786. To find out the specific standards for your state, check the official government websites for your state below:

How to compare smoke alarms

Keep in mind, you may also have to pay for installation. The cost of installation will depend on the size of your home, how many smoke alarm are required, the height and type of ceilings in your home, the structure of your home and individual circumstances.

When shopping for a smoke alarm, look for the following features:

Look for a long-lasting battery. Lithium batteries have a 10-year lifespan, so you won't have to remember to replace your batteries every year. Some models include a battery with the alarm unit, while other alarms require a separate battery.

Many alarms include a mute or silence button so that you can turn off the alarm when it accidentally goes off. Some alarms have a mute feature that connects to your TV remote or smartphone, so you can mute the alarm easily without having to mess around with the actual alarm unit. Having a smoke alarm directly in your kitchen is not generally recommended, but if you do decide to do so, look for a model with a mute button so that you can shut it off the next time you burn some toast or make a smoky stir-fry.

Many alarms include safety lights to provide an additional warning in case of fire. These lights can also help you safely exit your home if the power goes out during a fire. Some models with lights are specifically for people with hearing difficulties, and often feature strobe lights and extra loud alerts.

Some units can connect to security systems, smartphones, smart speakers and other smoke alarm units. Interconnected smoke alarms will all go off each time one of the alarms is triggered. This means that everyone in your home will be alerted, no matter where a fire originates. Depending on where you live, the size of your home and when your home was built, you may be required to have interconnected alarms installed in your home.

Smoke alarms come with a test button so that you – or your landlord or strata – can ensure the alarm is working. A few models allow you to test them using a remote control or by flashing a light at the alarm unit.

Some high-end models include an insect screen to keep insects out of the alarm and stop them from triggering the alarms sensors.

If a fire started in your home, would you know what to do?