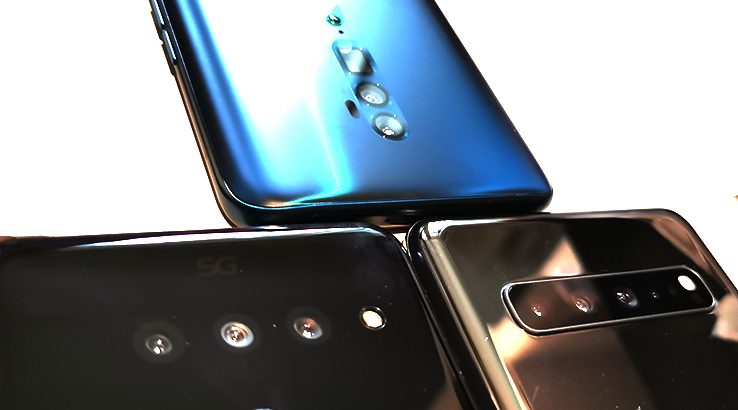 We head to Sydney's Vivid festival to put the cameras behind the fastest 5G phones to the test.

5G is the hype word in telecommunications right now, and we're awash with the first wave of high-speed handsets to come out of Telstra. I've already tested out how fast Telstra's 5G network is at launch, but that's far from the whole story for these handsets.

All 3 launch 5G handsets are premium devices, and all promise premium camera capabilities, whether you opt for the Samsung Galaxy S10 5G, LG V50 ThinQ or Oppo Reno 5G.

Now, just about any phone you buy these days should be capable of decent shots in reasonable light, but it's when you push these cameras that you should see the benefit of a premium-priced phone. So I slung all three phones into my pockets – just – and headed down to Sydney's Vivid Festival to see how they'd handle a mix of night conditions, very bright lights and heavy crowds. Also, as it turned out, a fair amount of rain too, although that may have helped to keep the crowds to manageable levels.

It's surprisingly nerve-wracking to wander around with around $5,000 worth of smartphones that you don't actually own in your pockets, so insurance is a bit of a must. But how did the phones compare?

Before we start, a few ground rules. I've shot everything here handheld, in automatic modes. I've no doubt that with a tripod, patience and careful application of the Pro modes that each camera has that you could get better results than I have here. That's not the point. Most consumers want a camera phone that they can point, click and move on with, and that's what I wanted to test here.

While the light fixtures at Vivid do flicker and change over time, I tried my best to ensure that the shooting conditions for each phone were as close as possible each time. That's surprisingly hard to do in thick crowds and pouring rain.

My Vivid journey started with a shot of one of Sydney's most enduring tourist icons, the Sydney Harbour Bridge, lit up in Vivid style. 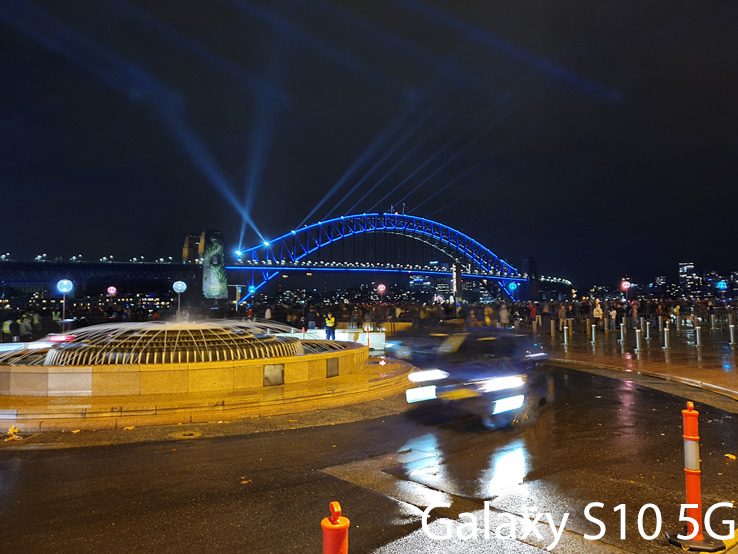 LG's track record in low light of late hasn't been exemplary, and it got off to a mediocre start with its shot of the Harbour Bridge, picking up only a low light pattern. It at least grabbed some of the spotlights in the sky. 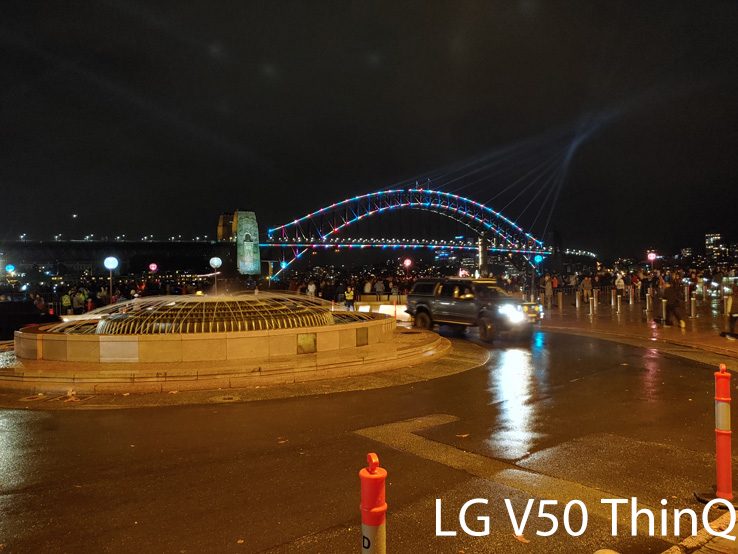 The Oppo Reno 5G was the worst performer in this test. Again, it's not a bad shot, but there's no way I'd pick it over the LG or especially the Samsung. 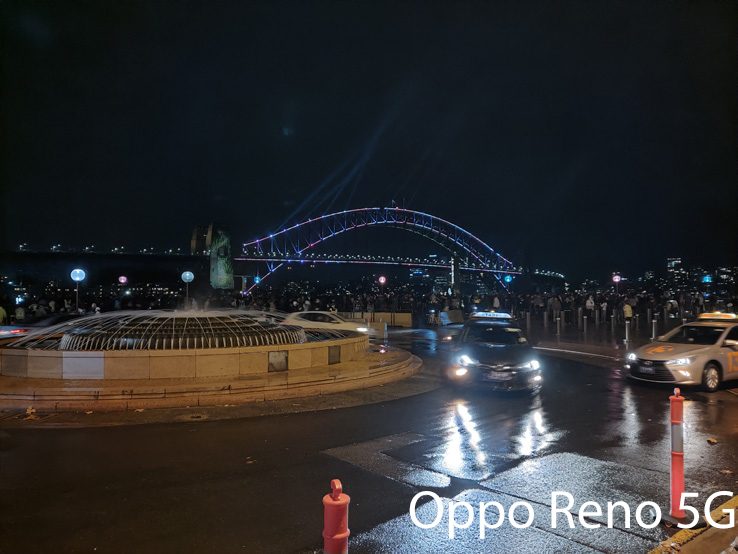 Actually getting close to the Opera House while still feeling safe that I wasn't going to have several thousand dollars worth of phones whipped from my hands proved tricky, so I went for a longer shot. What I was looking for was a crisp shot of the Opera House itself. I'd certainly crop these shots down if I was using them anywhere to slice out the crowds below.

Overall though, all three phones delivered quite pleasing results. 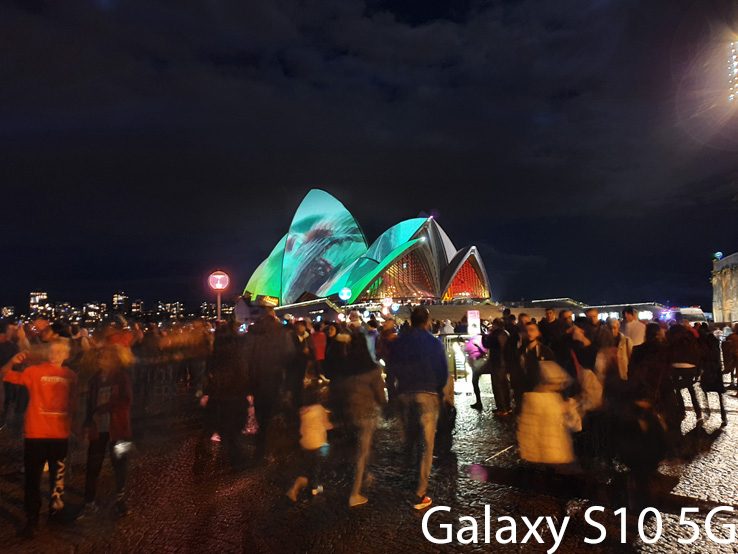 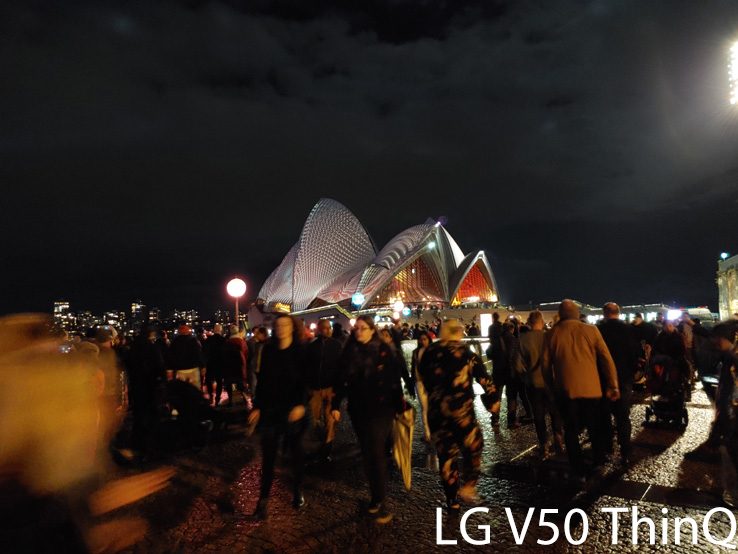 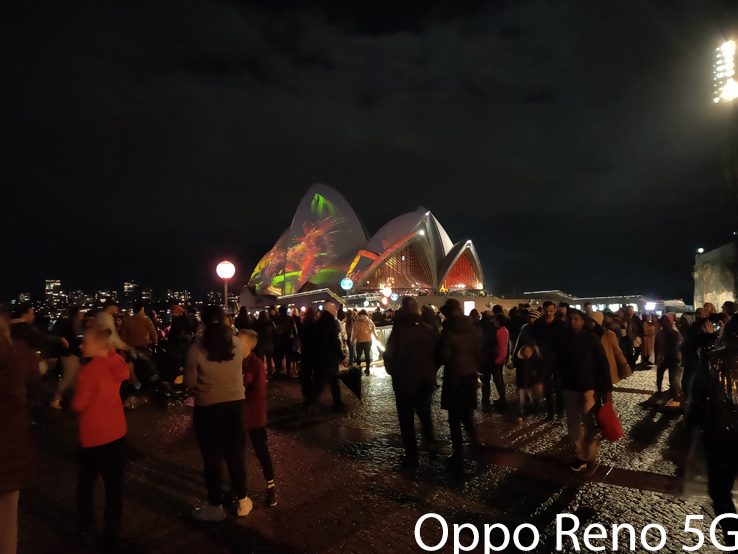 The crowds around the Opera House and Circular Quay were proving way too thick to easily move through, especially as I was also there with family, so we made the decision to do the walk through the Botanic Gardens rather than fight the thousands. Around the other side of the Opera House you don't get projections, but you do get a boat with an LED outline, good for checking low light performance in a tricky scene.

The Galaxy S10 5G delivered a pleasing shot with nice differentiation between the dark sky and the outline of the boat. 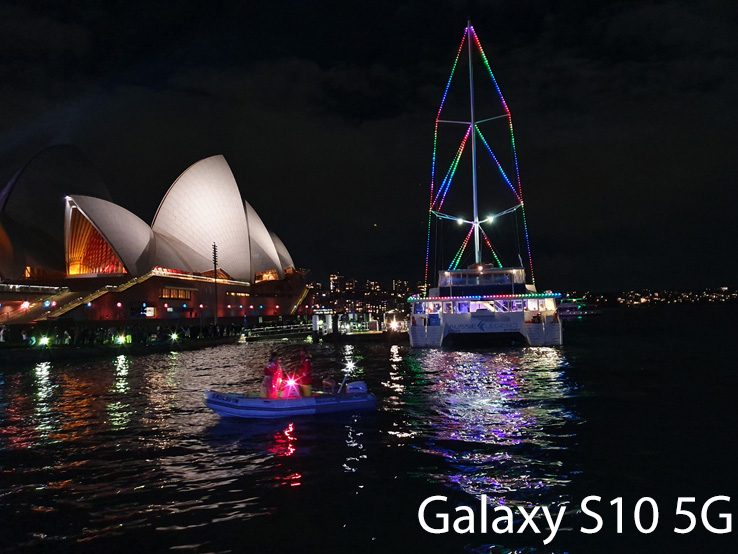 It's matched almost exactly by the LG V50 ThinQ which also produced a pleasing shot. 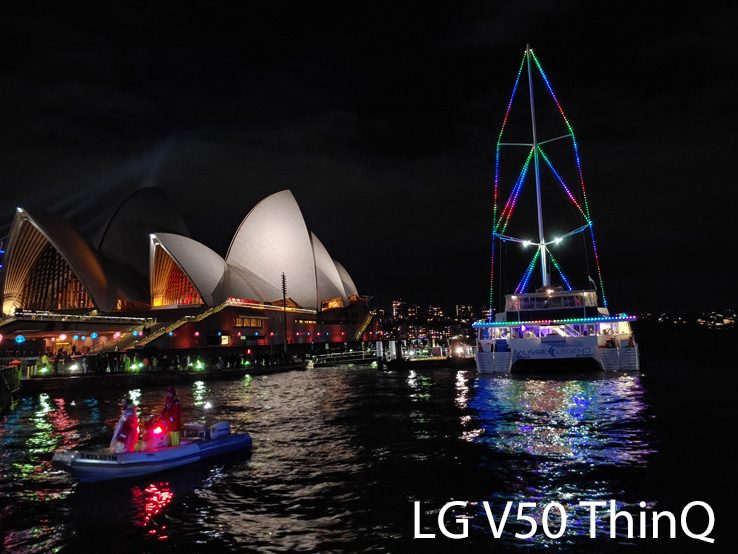 At a pure low-light pick-up level, I've got to give the gong to the Oppo Reno 5G, which picked up cloud outlines where the other two phones went for a black backdrop. You might not want that in your shot, but that's what post-processing is for. As a reminder, these are straight shots as each camera decided to take them. This interactive installation provided a great backdrop of heavy light and darkened background.

The Galaxy S10 5G and the LG V50 ThinQ both provided a good shot with just a hint of the trees behind coming into shot. They're basically too close to call. 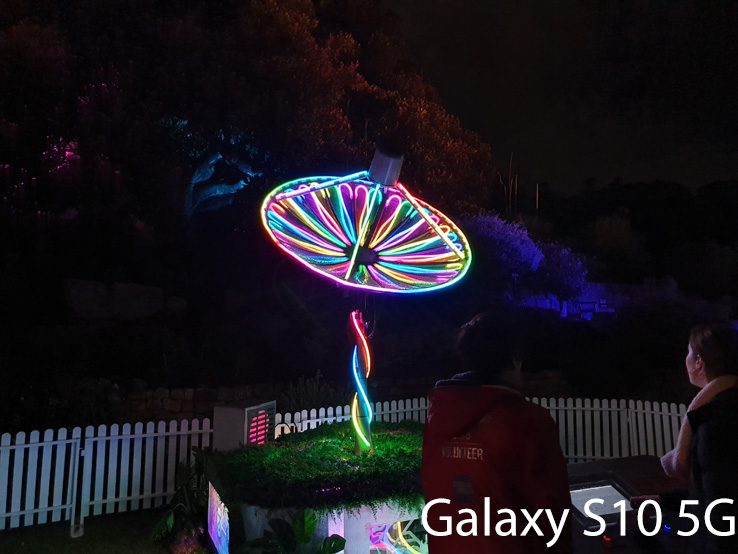 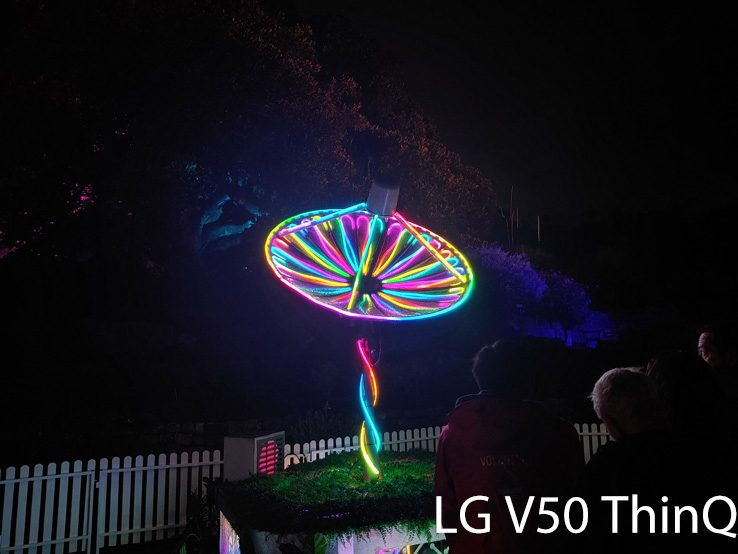 Whereas the Oppo Reno 5G's AI-driven shot didn't really pick up the same level of detail. 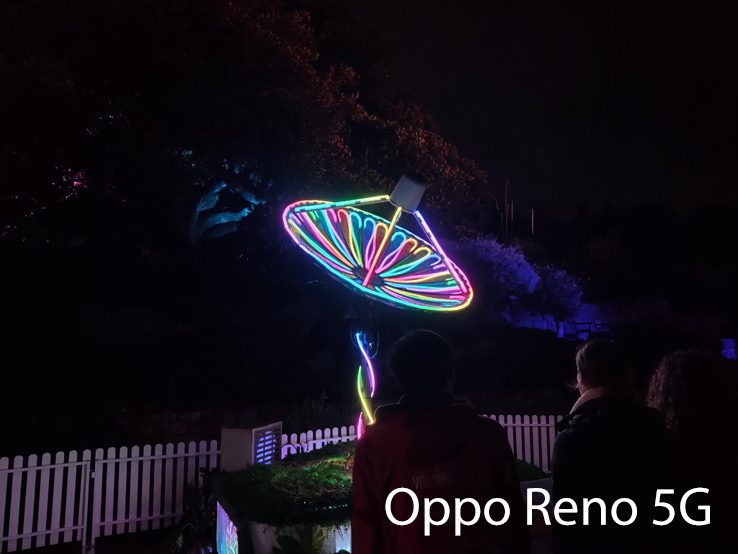 Another interactive exhibition, and another opportunity for the phones to differentiate themselves.

The Samsung Galaxy S10 5G takes the crown here for a shot it composed quickly and with a really nice balance of detail and colour. 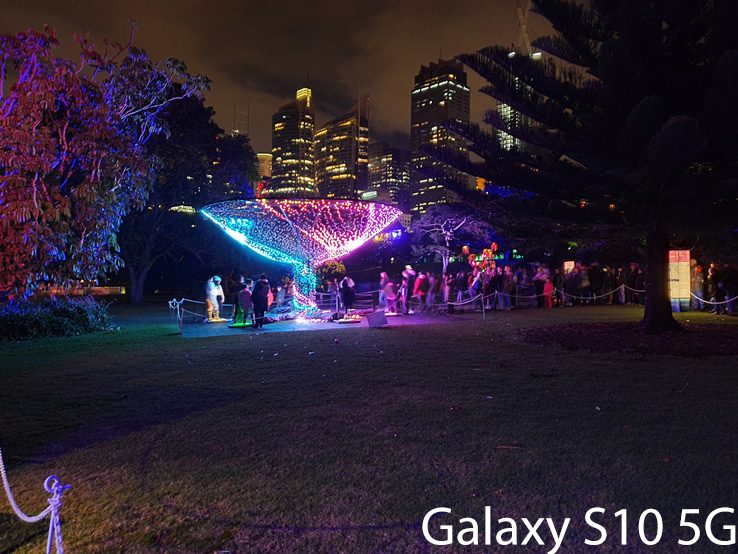 It was the LG V50 ThinQ's turn to provide shots that were notably darker than the competition. I did take multiple shots with each phone to give them the best chance to choose their exposures, and this was the best the LG could do. 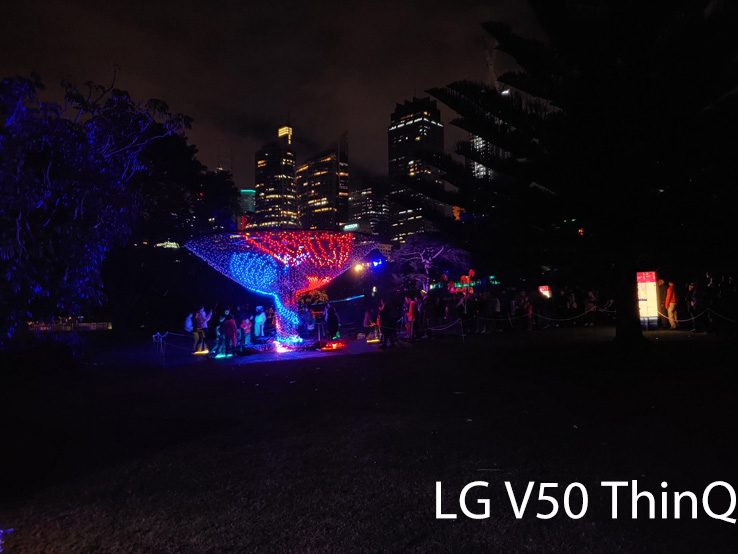 Oppo's Reno 5G has a night mode you can invoke, but from time to time its AI routines kicked it in if it decided the scene was already too dark. That's what happened here, and while it gives you plenty of grass detail, it's at the cost of a slightly washed out scene overall. 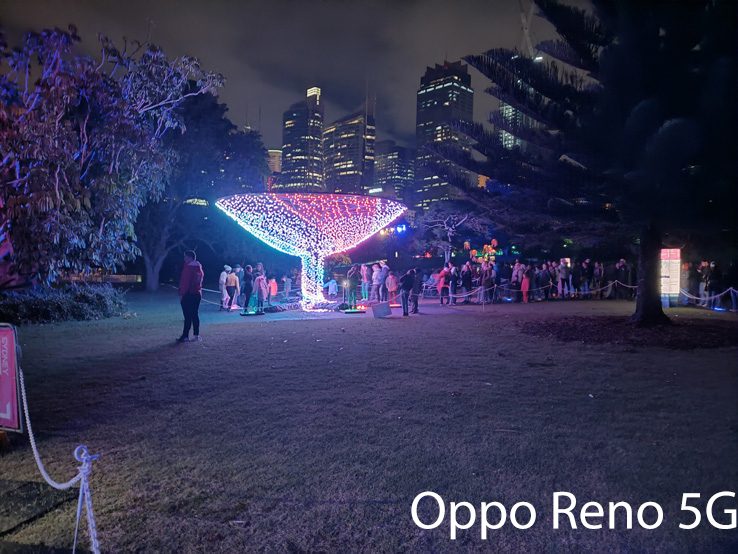 Here's a shot almost nobody would ordinarily take at Vivid. I'm facing into the Botanical Park, away from the lights in order to push the low light capabilities of each phone. There are a few spotlights and a level of reflected light off the fields of glow bugs behind me, but not much. For each shot, I deliberately engaged the "Night" mode for each camera.

The Samsung Galaxy S10 5G again impresses, with plenty of detail in the scene. The LG V50 ThinQ presents the same image, but with a notable darker cast. And in a distinct third, the Oppo Reno 5G. 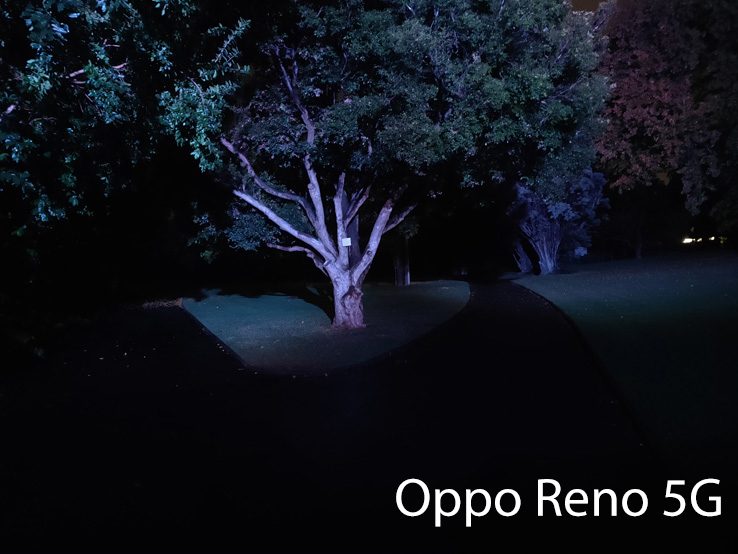 The highly lit building was contrasted nicely by the darkened lawn in front, making a photographic challenge I couldn't resist.

Again, the Galaxy S10 5G came through nicely, grabbing foreground detail as well as a surprising amount of building detail in the same shot. 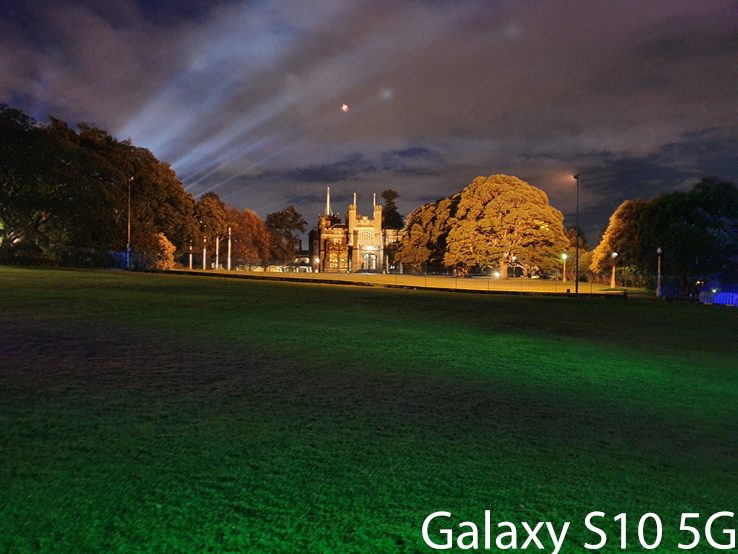 The LG V50 ThinQ is close, but it did blow out the lighting directly in front of the building. 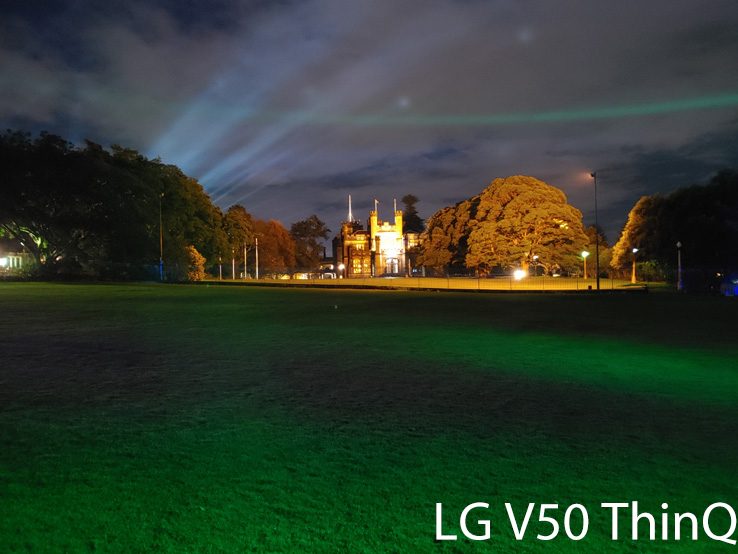 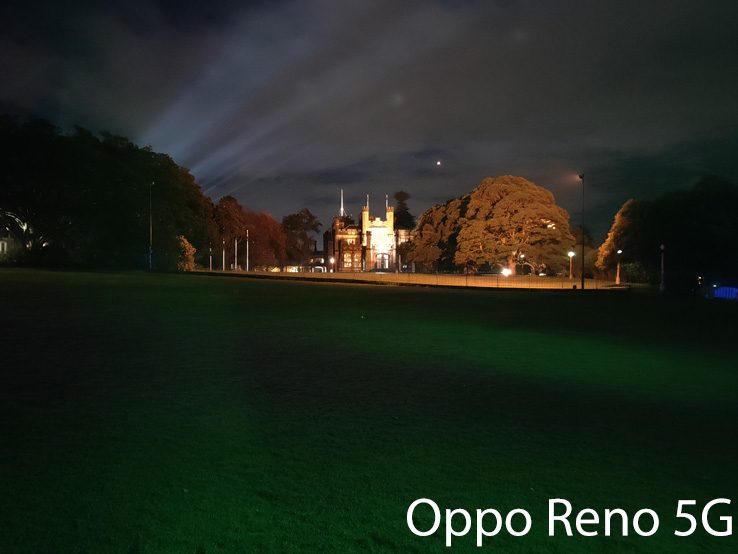 Why is there a field of glowing spikes? Am I the only one finding it all a bit confrontational? It was at this point I figured it was time to finish up my Vivid journey. Well, that and the fact that the rain was starting to come down even more heavily, and I remembered that the Oppo Reno 5G isn't strictly speaking water resistant. 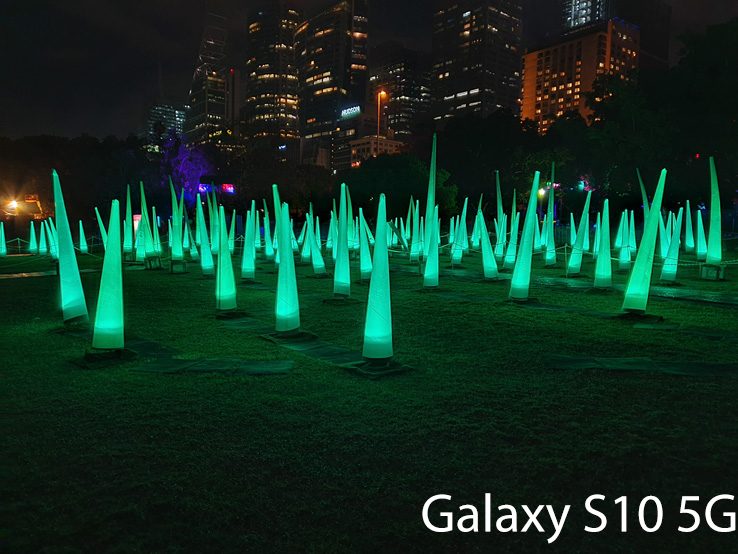 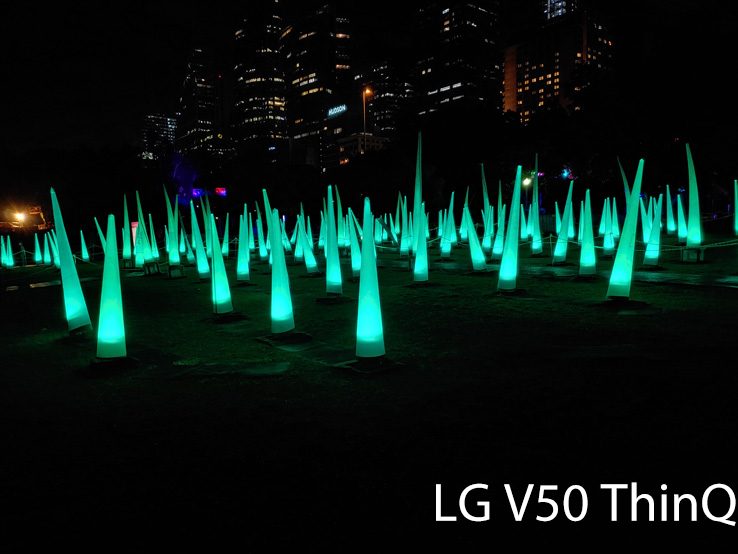 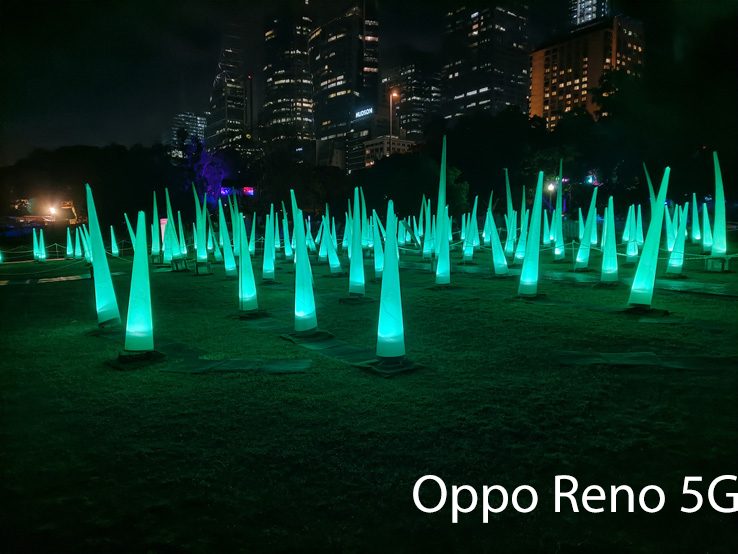 While all 3 phones had their missteps, I've got to come out in favour of the Galaxy S10 5G. Overall, it delivered the most pleasing shots most of the time with the least amount of effort.

Although that doesn't make the decision of which phone you should buy if you're super-keen on a 5G phone any easier. The Samsung Galaxy S10 5G is the low light photo winner, but it's also substantially the most expensive. The LG V50 ThinQ has given me the highest observed 5G speeds in the wild, and you get that neat dual screen accessory as standard. The Oppo Reno 5G might not have shot quite as nicely, but it's by far the lowest-cost 5G handset you can buy.

Our full reviews of all three phones are coming soon, so stay tuned.