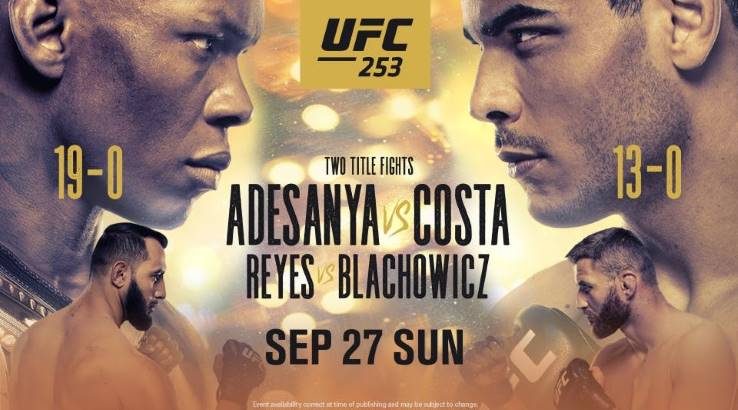 Undefeated fighters with vastly different styles clash when champion Israel Adesanya faces Paulo Costa in UFC 253. This is how to watch.

Israel Adesanya puts both his middleweight championship belt and his unbeaten record on the line when he steps into the UFC Octagon in Abu Dhabi. The 31-year-old who calls himself "The Last Stylebender" is favoured to take his record to a perfect 20-0.

In his way is 29-year-old Brazilian Paulo Costa, who is the second-ranked fighter in the middleweight division behind Australia's Robert Whittaker. A heavily built mixed martial artist, Costa has won 11 of his 13 fights to date by knockout.

The co-main event pits Dominick Reyes against Jan Blachowicz for the light heavyweight title vacated by Jon Jones, who has moved up to heavyweight.

When is UFC 253 Adesanya vs Costa?

UFC 253 is being held on Sunday 27 September in the United Arab Emirates, with the preliminary card starting at 10am AEST with 4 fights. There are then 5 more bouts on the main card starting from midday AEST. We have a full UFC schedule you can see here.

How to watch UFC 253 Adesanya vs Costa

The preliminary fights for UFC 253 are on ESPN, which can be accessed a variety of ways. The same is also true for the main card, which is exclusive to pay-per-view on Main Event. Take a look at our complete guide to watching the UFC.

How to watch UFC 253 preliminary card

Foxtel iQ, Kayo Sports, Foxtel Now and Fetch TV are all options for tuning in to ESPN in Australia. There is also the organisation's own UFC Fight Pass. Among those, Kayo is the pick for the preliminary card and loads more live sport.

Kayo has access to more than 50 sports, including every UFC Fight Night and the UFC 253 prelims. The platform currently has a 14-day free trial. After that a Basic subscription is $25 a month which allows you to watch on 2 screens. There is also a Premium subscription for $35 a month that gives you another screen.

Kayo has a wide range of special features, such as SplitView, where you can watch four sports at once on the same screen. It is compatible with Android and iOS devices, Android TV, Telstra TV, Apple TV, Samsung TV (2017 or later), PCs, Macs, Chromecast and AirPlay.

You can check out our full Kayo review for more detailed information.

How to watch UFC 253 main card

You need to purchase the main card to watch it live or via replay. Main Event on Foxtel, UFC Fight Pass, Fetch TV and PS4 are the providers of the main card.

UFC 253 costs $54.95 on Main Event with a Foxtel subscription and you have a few options to place your order. You can go through the Main Event website, use your Foxtel remote, with the My Foxtel app or over the phone. You can also order it over the phone if you have Optus TV featuring Foxtel. Ordering through a phone agent will incur an additional $2 booking fee.

You can also order Adesanya vs Costa through UFC Fight Pass for a cost of $54.95. You do also have the option of subscribing to Fight Pass for $10.99 a month or $104.99 a year. It is compatible with Apple TV, Xbox One, Xbox 360, Amazon Fire TV, iPad, iPhone and Android devices, Chromecast, PCs and Macs, Samsung smart TVs and LG smart TVs

Stream UFC 253 on your PlayStation 4

If you have a PlayStation 4, look for Live Events in the PS Store. Once you have purchased the fight you can watch it through the "videos" menu. It costs $54.95 or there is a discounted price of $49.95 if you are a PlayStation Plus member.

Who will win Adesanya vs Costa?

This is an intriguing and spiteful match-up and could present the biggest threat yet to Adesanya's unbeaten streak. The Nigerian-born, New Zealand-based fighter has a significant height and reach advantage over Costa and will aim to use his striking and unconventional angles to counter the Brazilian.

Costa is likely to spend most of the fight moving forward looking for another knockout to add to his collection. If Adesanya can use his speed to mostly keep out of harm's way, we're leaning towards another decision victory for the reigning champion.