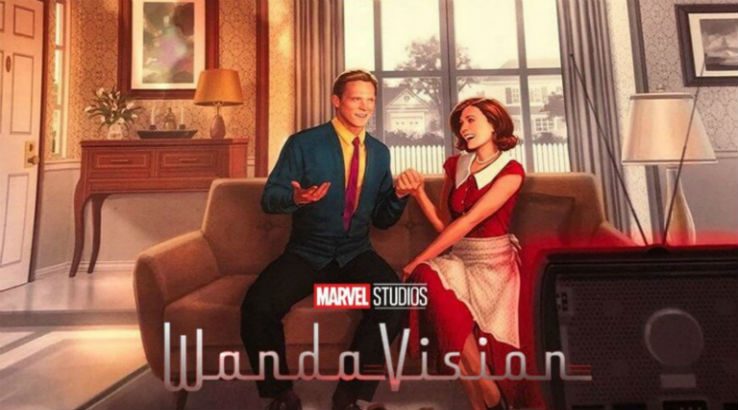 Vision and the Scarlet Witch are getting their own (bonkers) TV series.

There are currently several TV series set in the Marvel Universe that are scheduled to premiere on streaming service Disney+ over the next couple of years. The list includes Falcon and the Winter Soldier, which will follow the two characters in the aftermath of Avengers: Endgame. Then there's Loki, which will see everyone's favourite trickster messing with history. And What If…?, an animated adaptation of the comics of the same name, exploring what would happen if certain past scenarios had played out differently.

However, the most intriguing title of the bunch is WandaVision. Little is known about the show so far, but the key art and the concept seem like a huge gamble for Marvel. With Phase Three over, it's expected to see the company take more risks – and this one seems just insane enough to work. Here's everything you need to know to tune in.

What is WandaVision about?

Well, umm, it might start off as a sitcom? A 50s sitcom, to be exact, in the likes of classics like I Love Lucy. What does this have to do with the Marvel universe? A spoiler for Infinity War/Endgame follows, so you might want to look elsewhere if you haven't seen the two blockbusters yet.

Vision is dead. Despite tremendous efforts from Wanda, Thanos murdered him in Infinity War, prior to performing the Snap. Hence, he was not brought back when everyone returned in Endgame. Rumour has it that WandaVision will at least in part take place in Wanda's head, as she tries to cope with the events of the two movies and comes up with a dream-like family version of her life with Vision in the 50s.

Additionally, WandaVision will tie into the 2021 Doctor Strange sequel, Doctor Strange in the Multiverse of Madness, so maybe the action simply takes place in another universe? It's pretty clear the show will have a surreal element to it which might be fun to watch.

When does WandaVision come to Disney+ Australia?

The series was initially slated to drop in early 2021, but Disney has since announced that it will release the show this year. A premiere date has not been set just yet. WandaVision is likely to consist of six episodes.

Who stars in WandaVision?

Paul Bettany and Elizabeth Olsen will reprise their big-screen roles as Vision and Wanda/Scarlet Witch. The cast includes Kat Dennings and Randall Park, who will also be reprising their MCU roles of Darcy Lewis and Agent Jimmy Woo.

Besides, Kathryn Hahn will play a nosy neighbour, while Teyonah Parris was cast as Monica Rambeau, a character we saw in Captain Marvel.

Will WandaVision be any good?

It can go either way given the wacky concept, but our money is on yes. This is undoubtedly an ambitious, genre-bending series that could open new avenues for the Marvel Universe.

Plus, everything points to the show revealing more details about Wanda. The Scarlet Witch has always been somewhat of a mystery in the MCU. She had some memorable moments and her power is impressive, but we didn't get to her backstory in great detail or figure out what really makes her tick.

Learning more about Vision should also be interesting, especially if the series can help us figure out if he'll continue to be a part of the Marvel Universe moving forward.

Streaming service Disney+ offers a generous library of content which features both movies and TV shows. Titles come not only from Disney itself, but also subsidiaries Marvel, Star Wars, Pixar and National Geographic. So there's plenty for the entire family to watch. To sweeten the deal, Disney+ also offers original productions, including hit series The Mandalorian.

Check out Binge for 14-days free

Disney, Marvel, Pixar and more all in one place.

Critically acclaimed musical Hamilton is coming as a movie to Disney+

Hamilton is being released on streaming more…

This week in streaming: The latest Star Wars movie and a Jerry Seinfeld special

Highlights include Rise of Skywalker, Run and…

This week in streaming: Mrs. America premieres and Onward arrives on Disney+