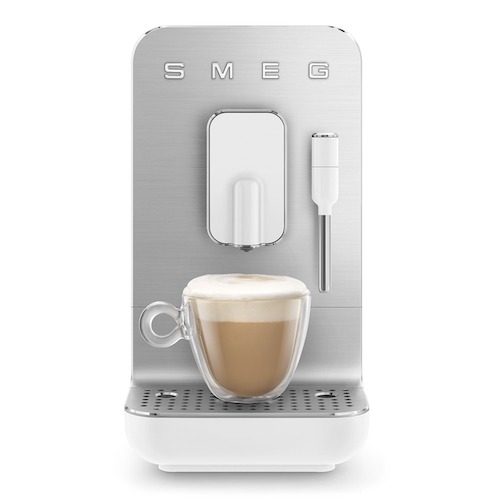 For the last few years it's seemed that brands were unwilling to offer good automatic coffee machines for a price mere mortals can stomach. The fact that I'm touting a $1,349 coffee machine as being "budget" is ridiculous. Yet, compared to its peers, this is basically a bargain. I've reviewed automatic coffee machines from Jura, Philips and De'Longhi, which are mostly excellent (if somewhat over complicated) machines that do silly things with milk and cost more than $2,000. The Smeg BCC02 has been out for a while, and has not been shown the love it deserves. It also comes in a machine that does coffee only, without the steamer, if you prefer it black. 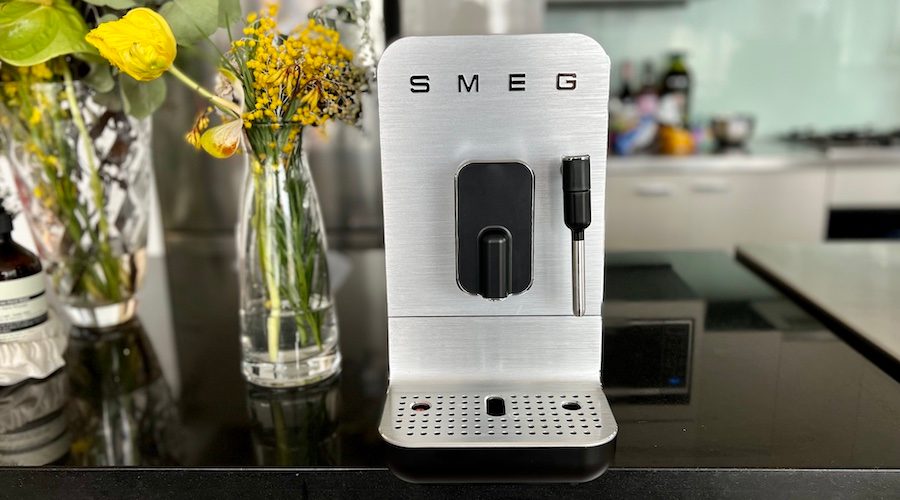 The BCC02 has that classic, retro Smeg design that you either love or hate. If you have a lot of other Smeg appliances, it will fit right in. The brushed metal and black accents are sleek, and the curved edges mean it blends better with most kitchen designs. It's also the smallest automatic coffee machine I've seen, which is welcome in an apartment with limited bench space.

My favourite thing about the machine is how simple and understated it is. Most of the other automatic coffee machines I've reviewed have proudly touted their touch screens and apps, making them great for nerds with extremely particular coffee orders, but less helpful for people who can't function before breakfast. There is a reason why my mum won't make herself a coffee on my De'Longhi machine, and that I'm getting her a BCC02 for her birthday.

Instead of presenting you with 1,000 options, the BCC02 has 8, using only physical buttons. Aside from the power button, there are 5 physical buttons: ristretto, espresso, long and water, and then the fifth button changes the colour of the light and thus the strength of the coffee/water. On white the 3 coffee settings are full strength and the steam wand dispenses hot water for tea, and on orange the coffee is half strength and the steam wand steams for milk. I do question the logic of not having the steam wand steam with the full-strength coffee, but that's a personal preference borne out of multiple mornings where I accidentally filled my jug of milk with hot water and regret.

The one downside of the space-saving design is that the machine doesn't hold much. While my De'Longhi PrimmaDonna Soul holds 500g of beans, the Smeg seems to hold 250–300g. The water jug holds 1.4L and the grounds container holds 8 shots of coffee's worth of grounds. This isn't too bad if you're just making coffee for 1–3 people each day, but it would get tiresome if you have a larger household/small business. On the bright side, it gives the used grounds less time to get mouldy, which is an important touch.

Because the machine is so minimalist, you do need to keep the instructions by the machine for the first month or two, because not everyone can interpret the little alert pictures above the buttons. The water drip is obvious, as is the bricks to empty the grounds container, and with time you come to work out that the little circle over the jug means the beans container is empty. The alert exclamation mark and what appears to be either a bicycle lane or a small group stuck in a crevasse are less clear. 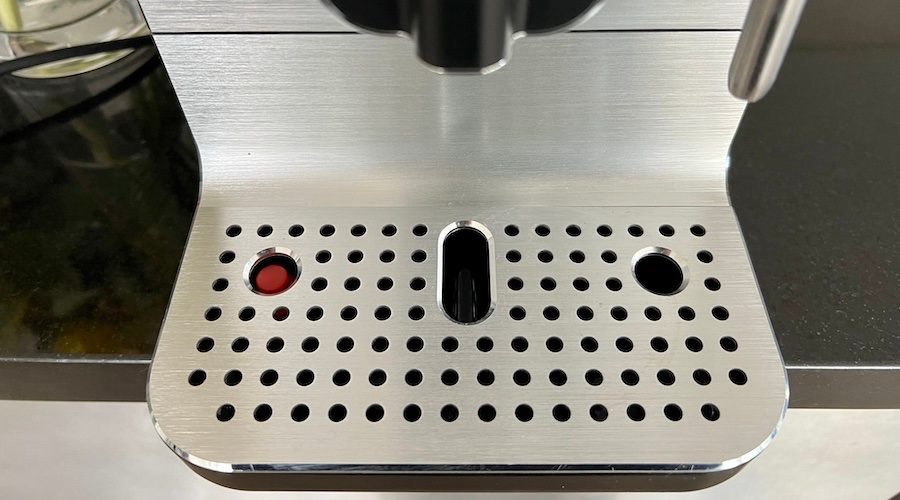 Another thing I really like is that the drip tray and the little door leading to the tamper are attached with magnets. You don't need to spend ages lining those things up, they just snap in. It also makes opening the little door fun, so I actually remember to brush the tamper every now and then.

One thing that I really hate, though, is that it doesn't come with a milk jug. If I'm going to spend over $1,000 on a coffee machine, I want it to come with all the required tools to actually make coffee. Sure, you can technically froth the milk in the mug, but there's also something unspeakably sad about taking the art away from the experience. Besides, the bottom of a mug is much thicker than the bottom of a milk jug, so you're much more likely to burn the milk and have the world's saddest coffee. It's a minor inconvenience to have to buy a separate jug, so it's not too bad, but it seems miserly that one doesn't come in the box. 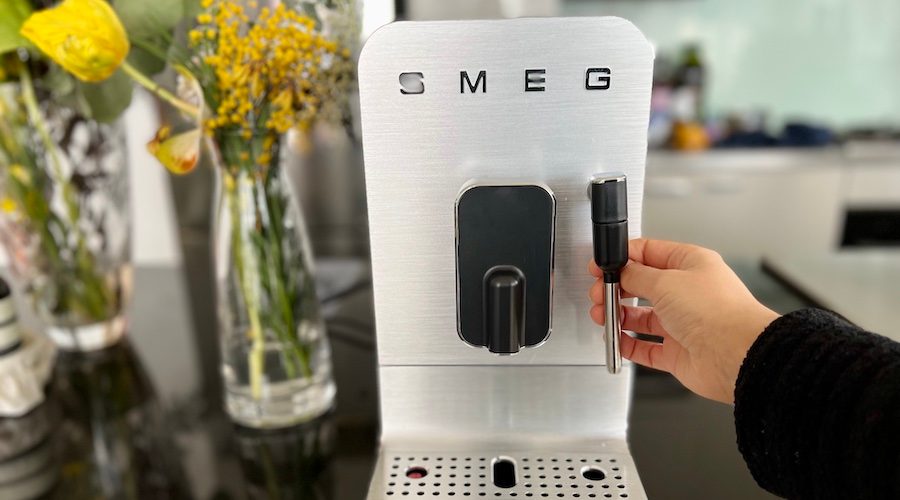 I love how simple it is to make coffee on the Smeg BCC02, even if the name sounds like I'm blind carbon copying in two friends to my email about coffee. You press the desired button and then coffee appears.

The simplicity of the machine is something of a double-edged sword. I'm used to being able to customise the strength and length of my coffee down to the gram and millilitre, so after being spoiled for so long it feels like a step down from my other, more customisable machines. However, my wife (a former barista) who hates the way I like my coffee yet can't be bothered customising her coffee settings, loves the Smeg. For her, it's the perfect cup. I've also found that combining a long black and an extra shot of espresso gets me closer to my ideal brew.

Because you can't customise, it's worth seeing if there's a store near you that will allow you to try before you buy. The Myer near me does that with some machines. But with 6 coffee strengths and settings, there's likely to be one you enjoy.

In these automatic coffee machines, I always harp on about how the automatic milk sucks. Smeg has sidestepped this by making it a manual milk steam wand. When I first got the machine, I was scandalised. Surely this goes against the whole idea of it being an automatic machine? Steaming milk is an impressive skill, one that takes a long time to learn.

However, after a month of resenting having to steam my own milk, it suddenly clicked, and I now don't want to go back to not having a steam wand. That being said, I'd still prefer it to be an automatic wand, like you find on Breville machines.

Not coming with a milk jug is ridiculous, and I wish they'd thrown in a milk thermometer, too, but they're both fairly cheap things to buy. If you don't have or want a thermometer, there is a cheat way to getting your milk the right temperature of around 70 degrees: hold the jug with your fingers on the bottom and a thumb stabilising the top instead of using the handle. Once it gets too hot to comfortably touch, press the steam button to stop the process. Moving the wand up and down a bit will froth the milk, if that's how you like it. It's actually much easier to get the milk "pretty good" than I remembered from when I used to use manual steam wands.

It's also a very easy to clean machine. Even if it isn't as automated as some of the more expensive machines, it only takes about 30 seconds each morning, and every now and then you give the washable components a more thorough wash.

All things considered, this is a great machine. This is the coffee machine I recommend to friends and family. It doesn't do absolutely everything, but it also doesn't need to. If you want a coffee machine that makes coffee well without over complicating things, the Smeg BCC02 is the one to get.

I spent 3 months making an almost unhealthy amount of coffee to test and compare to the 4 other machines I have in my kitchen. I was sent the machine by Smeg PR for the purposes of this review.