Quick verdict: The Jura S8 makes superior coffee, but no-one is awake enough to deal with the milk system in the morning. 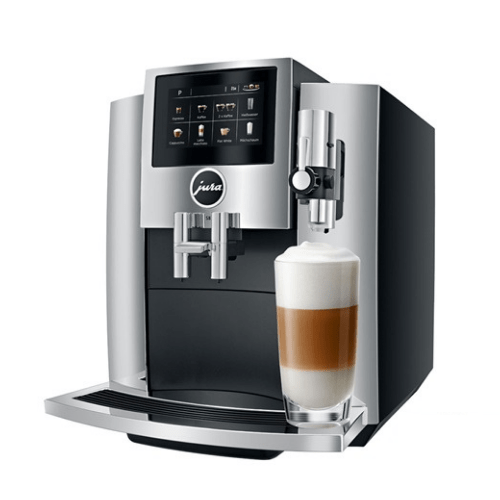 I have long admired Jura machines for their dedication to extracting coffee in the best way possible. It claims that its fancy grinder can get 12.2% more "aroma" out of the beans, which sounds made up. I have no way to measure it, but I'll be damned if the coffee doesn't taste and smell better, even with the same beans. The Jura S8 is part of the mid-tier S line of Jura machines and was released at the end of 2021.

But since my original infatuation with Jura machines, I've discovered other automatic coffee machines that can do almost as good a job with the coffee at a fraction of the price. I have yet to try a fully automatic coffee machine that's nailed the milk problem, though, and they all have their different shortcomings in that regard.

Although the Jura machine manages to get closer to the barista tiny bubbles than the De'longhi machine I recently reviewed, cleaning out the milk system takes so long that most mornings I just pour cold milk in my coffee to avoid it. That's plain unforgivable in a $2,890 machine – especially when Nespresso machines have nailed the process. And the De'longhi was easy to clean. It's not that the process requires a lot of effort, it just takes more time than I'm willing to dedicate for a single morning cup of coffee.

That said, if you like your coffee black, or are less impatient than me, a Jura machine is going to give you the best coffee available for the same price as a gaming laptop or used car. The S8 is fully automatic and comes so close to perfection if milk and price are no objects. 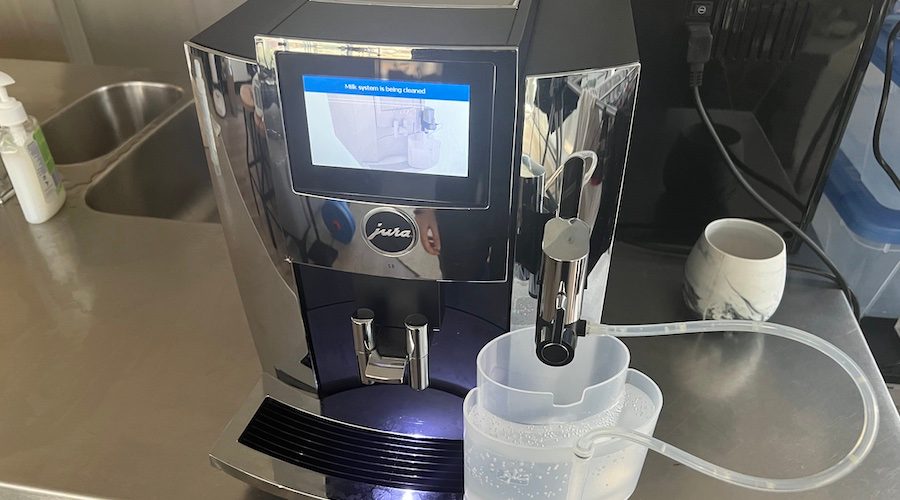 I'm fascinated by the aesthetics of fully automatic coffee machines. If you put an RGB trim on them, they'd fit right into a gamer set-up. Real "what if Darth Vader got into chrome body modifications" vibes. But that's pretty true across the board, and if your kitchen is either black or stainless-steel themed, it should fit right in.

I was surprised by how plastic all the elements felt; I would have liked some more metal in there, but it does make it a bit lighter to move around and it doesn't look anywhere near as cheap as it feels.

The S8 is a chonky boy. It takes up a lot of bench space in every dimension, especially if you take milk because the milk jug needs to be placed beside the machine when in use. But again, it's roughly on par with all the other automatic coffee machines I've used, so this just seems to be the norm.

First, the good. I really like the large, bright 4.3-inch touch screen. It's easy to read and use. Having separate spouts for hot water and coffee means you can comfortably use it to quickly make tea without filling your cup with stale coffee water, which is definitely a bonus.

I also really like the chute for pre-ground coffee in addition to the (admittedly a bit small) bean container. That way the main coffee is always ready to go, but you can still have a decaf in the afternoon, or the special coffee your mother-in-law prefers without removing all your beans first. 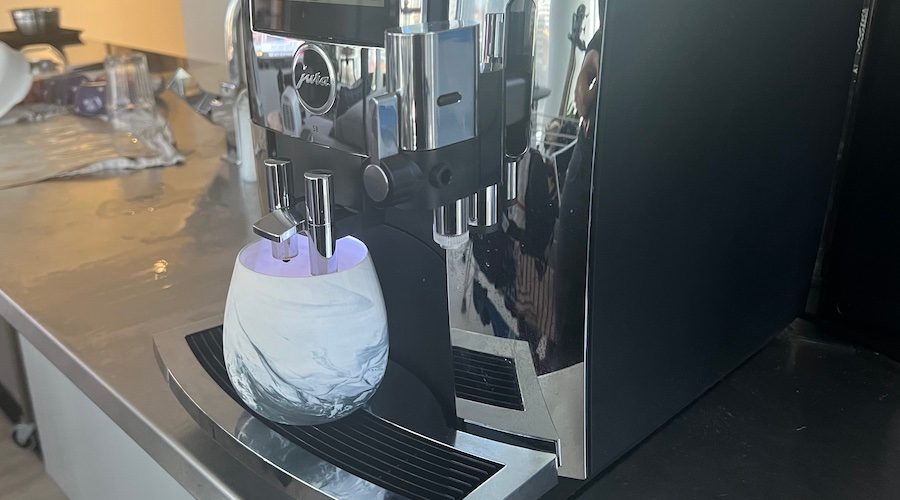 Now to the odd.

When customising a coffee, the coffee and milk are measured in 2 different units. The coffee is measured in millilitres, while milk is measured in seconds. This is fine once you adjust to it, but it is also deeply weird. If I want 2 parts coffee to 1 part milk, I just have to vaguely guess how many seconds 25mls is. It's not something you'll encounter after you program the preferred coffees for the whole family, but that doesn't make it any less weird.

In comparison, the milk and coffee nozzle seems like an afterthought. It's off to the side with only around 1cm clearance between the mug and the wall of the machine, and I can never get it to the right height for my mugs, so the machine gets covered in milk splatter. Incorporating the milk nozzle into the original coffee nozzle set-up would have made so much more sense for both aesthetics and function. This machine gives off strong vibes that it was designed purely for black coffee drinkers and that the person in charge of the design was resentful that milk drinkers had to be included. I've said it before and I'll say it again: Jura makes the best machines for black coffee drinkers. They cost a pretty penny, but this is as close as you can get to a professional barista coffee at home. With a blind taste comparison to my De'Longhi PrimaDonna Soul machine using the same beans, the S8 is noticeably better, bringing more of the flavours out of the coffee. Both are extremely good, but the S8 has an edge. And it's hard to argue with the convenience of tapping a touchscreen to make your coffee of choice in the morning. If this was a machine just for black coffee (and was a bit cheaper), it would easily get 5 stars.

However, it's not just for black coffee, so let's talk about what's going on with the milk.

The new professional fine milk frother has the best quality tiny foam bubbles I've experienced on a Jura machine. It doesn't come close to matching the automatic steam wand on the Nespresso Creatista range, but it's still good. It's a bit annoying that your options are flat or foamy with no in between settings, but you can always move the slider up and down while making your coffee if you feel like being extra hands-on. The seal of the milk jug seems to be better than on the De'Longhi PrimaDonna Soul, because milk in the jug stayed fresh until the official use by date, so less milk is wasted. Where the irritation comes in, though, is that you have to clean out the milk system every day. On the Nespresso Creatista you wipe the wand with a cloth and then it releases some steam; on the De'Longhi PrimaDonna Soul you turn the dial to "clean" and it rinses the nozzle in a few seconds.

All of that is fine. Being clean is important, But wouldn't including the automatic steamwand just be easier, not to mention make silkier milk? They got so caught up in the idea of being able to offer an automatic milk system that they didn't consider how much extra work this creates when the whole point of having a fully automatic coffee machine is not having to use more than one braincell before toast.

Aside from that, the machine is easy to set up, mostly cleans itself, and all the functions work as expected. There is an app, which is a nice addition and good to impress guests, but likely won't be something most people use frequently given how much easier it is to just use the machine.

I love Jura coffee machines, but there's just been too much progress in milk on automatic coffee machines from other brands to bother with a daily cleaning process that's this involved when there are other options. I still strongly believe that Jura will give you the best black coffee experience, and only you know if that's worth $2,890 to you.

For what it's worth, the De'Longhi PrimaDonna Soul is frequently on sale for well below $2,000 and gives a similar experience. 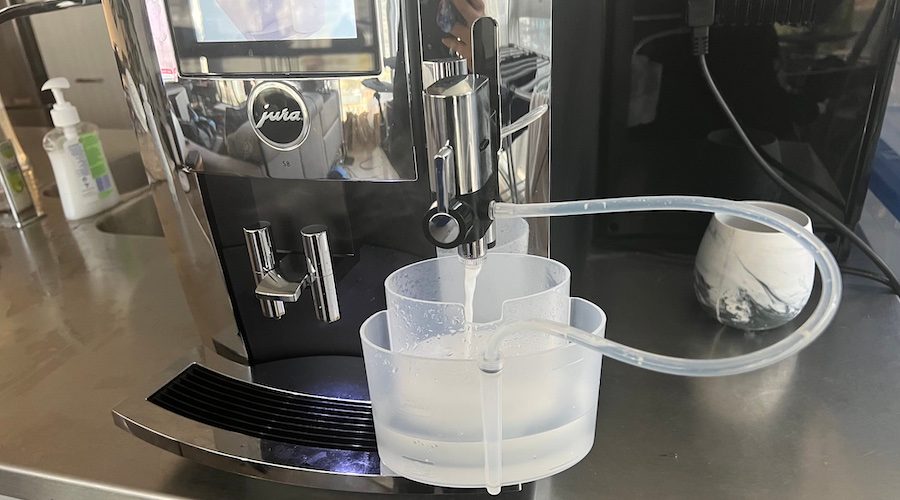 I used the Jura S8 as my main coffee machine for 6 weeks, and also directly compared it to the De'Longhi PrimaDonna Soul and Nespresso Creatista Pro. The machine was provided by Jura PR for the purposes of this review.