On The Rails Day 3: Albury altercations 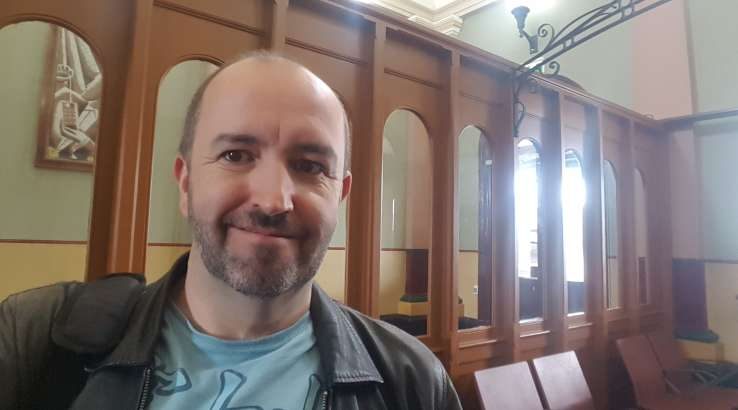 Nothing like starting your day with a fight with a fellow passenger.

So here's how my day began: there's a lady in seat 53A. "Excuse me, I'm booked in that seat." "Well, can you wake him up because he's in mine." She points to the row opposite, where there's a dude sleeping, with that slightly worrying is-he-asleep-or-totally-baked look. I wake him. He's not happy. His ticket says he's in car B, but he doesn't want to move. "Why you hassling me, man?"

While it's true there are plenty of vacant seats, I get fired up. "Because you're in the wrong carriage. I'll go and get the guard if I have to." He still isn't moving. Jerk. At this point, the woman decides to sit in the currently vacant seat behind mine, but then five minutes later, the dude, perhaps realising that there will be a ticket check eventually, shuffles off to car B.

I hate this sort of encounter. But I hate people who try and just claim any old seat in a reserved carriage more. I'm funny like that. With four hours in each direction to take me to Albury (crossing the state border/Murray River in the process), I intend to take advantage of the seat that I booked and paid for. 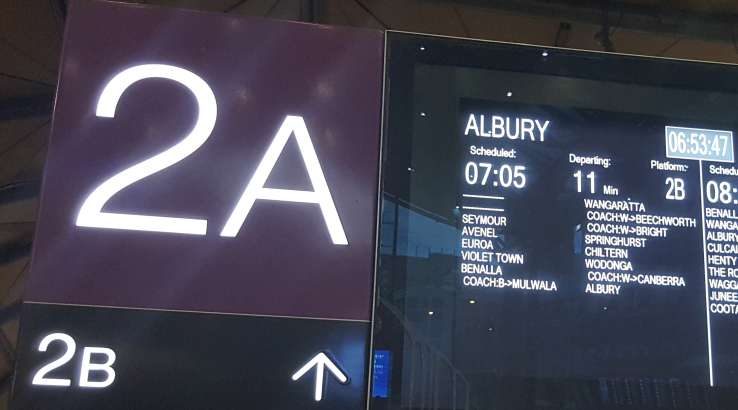 While there was plenty of space in car A once we'd gotten rid of the jerk, the same can't be said for the return, when every single seat in the first class coach was full. For the first time, I had to spend an entire journey with someone sitting next to me. Yeah, I know, first world problems. 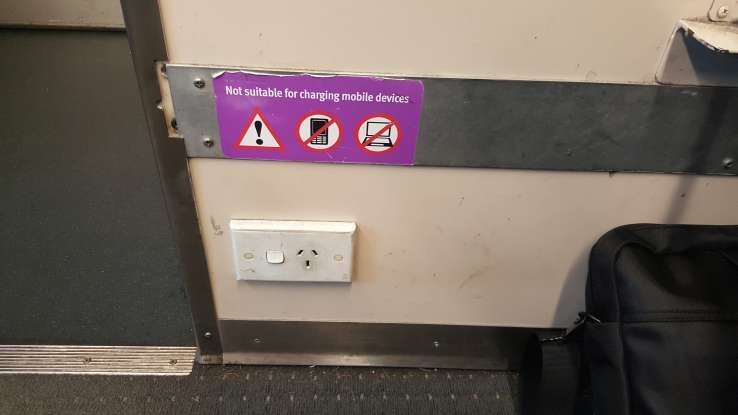 A minor disappointment on the trip up was discovering that the power outlet I'd spotted on a previous trip couldn't actually be used. A large sign confirms "Not suitable for charging mobile devices". Damn. 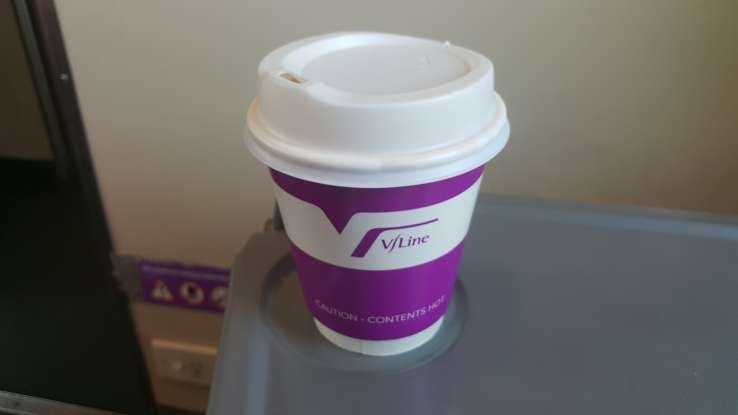 I also ventured into the buffet car and sampled some V/Line coffee. It was an acceptable long black, though I suspect my fussier caffeine-fuelled colleagues might disagree.

Yet again, we lost some time during the journey but only pulled into Albury about 10 minutes late. Albury itself is a very impressive station with massive platforms and spacious waiting rooms, reflecting that it used to be the key interchange point for passengers between Victoria and New South Wales back when the two states had different rail gauges. 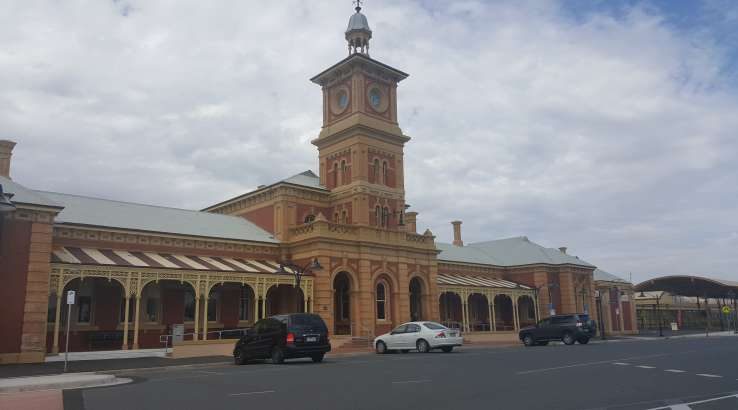 Geek note on that point: I could have done the train trip from Southern Cross to Albury faster if I'd taken the NSW XPT, which goes through Albury on the way to Sydney on the now-national standard gauge line. That service takes roughly 2.5 hours, rather than 4 hours. However, it felt like that would be cheating.

This time, I'm giving myself an 8.5 out of 10. The signal was still iffy, but because I'd anticipated that I'd lined up plenty of relevant work on my hard drive. I got a couple of major planning documents out of the way and managed more collaboration on Slack (our in-house messaging tool of choice) than I'd expected. 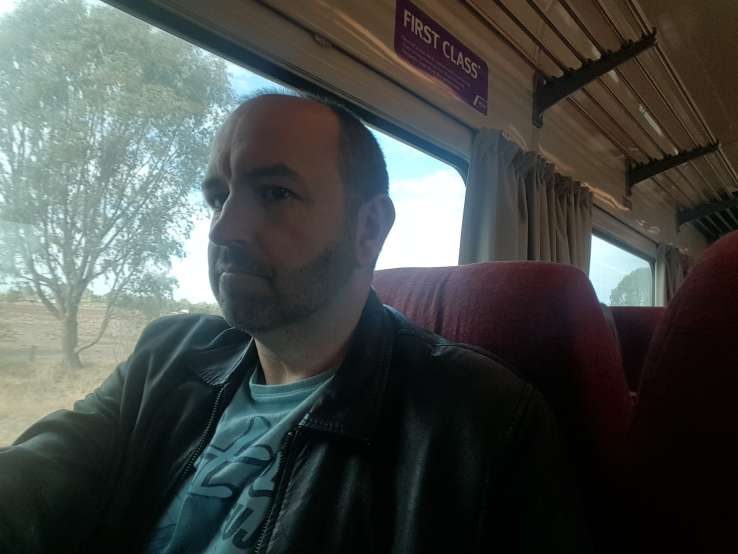 One thing I now realise helped: because there were 90 minutes between when my train arrived and when the return trip happened, I got in a decent walk and a proper sit-down lunch, not a hectic race to the nearest fast-food outlet. That made me much more energetic in the afternoon, which is something I should remember even when I'm working in a regular office.

Up next: Tomorrow's journey takes me to Swan Hill, which is the longest trip I'll make this week. That should drain the batteries. 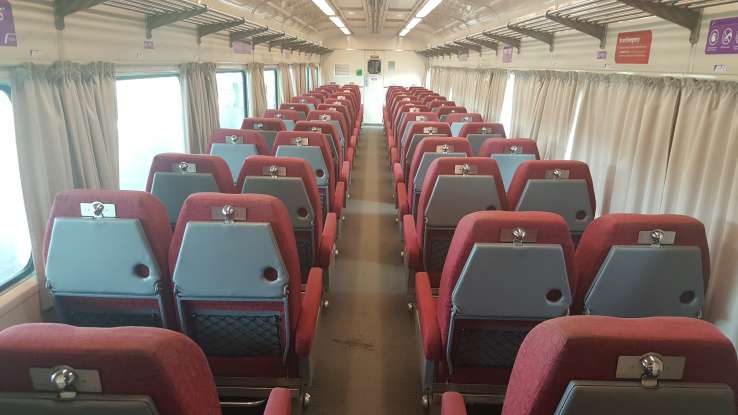