Transform your life (and kitchen) with the Magic Bullet now

The Magic Bullet is a small kitchen appliance that gives you a large amount of help in the kitchen.

An ‘As Seen on TV’ product, it is likely that you have seen the Magic Bullet in action. This is the small bullet-shaped blender that claims to be able to any job in just 10 seconds. By any job they mean chop, grate, or blend a variety of different foods to the consistency you want. So how well does it stand by that promise? 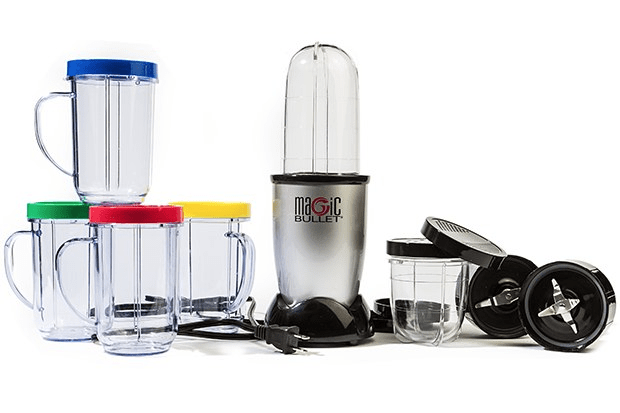 How does the Magic Bullet work?

The secret behind the multi-functions of the Magic Bullet is the unique oblong shape of the mixing cup, and two blades designed for different functions. The shape creates a cyclone effect inside of the mixer, where the food is being forced back down onto the blades. The cross blade with its four prongs is used for chopping, grating and blending, while the two pronged flat blade is ideal for whipping and grinding.

You would use the cross blade to make frozen drinks and sauces or even to grate cheese and vegetables like a food processor would. The flat blade can be used to whip mousses and puddings to the perfect consistency, or to grind coffee beans, soft nuts and spices.

Once you know the ingredients you are working with, simply fill one of the mixing cups that come with the Magic Bullet, screw on the right blade, turn it over and press it down onto the base. You can hold it in place for a recipe that calls for a smooth texture, or ‘pulse’ grate by releasing and reapplying pressure. This method is used when you want to create a chunky salsa or sauce. When finished you only need to remove the cup from the base, unscrew the blade and screw on the lid of your choice.

What does the Magic Bullet come with?

The Magic Bullet is small, but it comes with a large number of accessories. These include:

All of the cups and lids are safe to go in the dishwasher as well as the blades. You can also clean the blades and cup by blending a small amount of dish soap and warm water and then rinsing well under running water.

Magic Bullet versus the Nutri Bullet

While there are similarities both in the name and the shape of the Magic Bullet and Nutri Bullet, the Nutri Bullet is not as versatile. It’s carefully designed blades and 600 Watt motor are exclusively for tearing through fruits, nuts and vegetables and turning them into nutritious drinks. The Magic Bullet is not nearly as powerful with its 250 Watt motor, but its blades designs allow for other functions like chopping and grating.

The other major difference is in the cost. While the Nutri Bullet retails for over $200, the Magic Bullet can be found in stores for under $100.

Where can you buy the Magic Bullet online?

Sold? Buy the Magic Bullet online now at one of these top retailers:

Where can you buy the Magic Bullet in Australia?

Heaps of major department stores stock the Magic Bullet. Here's a rundown of some of bigger stores that stock it:

Recipe ideas for the Magic Bullet

The Magic Bullet is more than just a compact smoothie maker. With the right ingredients you can also use it to make soups, sauces and ground spices. Here are a few ideas to help get you started:

The versatility of the Magic Bullet makes it an appliance that can be utilised for dozens of different tasty and nutritious recipes. Plus clean up is easy with its one cup does it all feature and dishwasher safe parts. If you are looking for a way to simplify your cooking and smoothie needs, the Magic Bullet may be your answer.