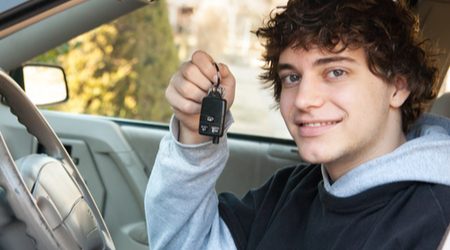 The NSW government is trialling telematics devices for under 25s in an effort to improve road safety.

1000 young drivers are taking part in a NSW Government initiative to test in-car black boxes. The six-month trial aims to reduce the number of younger motorists having accidents.

Minister for Finance, Services and Property, Victor Dominello, said technology like onboard telematics could help reduce road crash statistics for drivers under 25.

“The research shows that drivers who use telematics become safer and better able to adapt to changing driving conditions as a result of the real-time feedback,” said Dominello.

Internationally, insurance companies are already commonly using these devices, in some cases offering discounts for drivers who fit one to their car.

Dominello said the black boxes could save drivers money.

A technician fits a telematics device to a car. The gadget then records and transmits vehicle data like speed, acceleration, braking and turning using a SIM card. Telematics devices are often called black boxes after the data recording apparatus used on planes.

By monitoring how vigorously a driver brakes or turns, it's possible to get an overall snapshot of a motorist’s driving style.

Around the globe, insurance companies are also able to monitor what time of day a driver uses their car the most. The theory is driving at night carries higher risks.

It’s also technically possible to monitor whether a driver travels on highways a lot or whether they take frequent breaks on long journeys.

SIRA is looking for volunteers between the ages of 17-24 for the pilot scheme. Participants must live in Western Sydney or regional NSW. Volunteers will receive a $100 cash payment in exchange. To be eligible, drivers must hold a P1, P2 or unrestricted licence.

The trial starts in the second half of this year. Drivers will receive a partial payment before the trial and the remainder upon completion.

You can register your interest on the SIRA website. We have a dedicated page to compare car insurance for under 25s. The guide also features some handy hacks to save you money on your car insurance.