This game is adorable. I'd go so far as to say wretchedly. Not since the bric-à-brac aesthetic of Media Molecule's LittleBigPlanet series or Tearaway have I been this keen to put down my controller and take up craft again. Yes, not only does Yoshi's Crafted World deliver tight, nostalgia-fuelled platforming, it also makes one yearn for simpler kindergarten times when paste built amazing things and served as a tasty snack, too.

While the diorama worlds of this platformer are incredibly well-planned and intricately built, it should come as no surprise to Nintendo fans when I say the story on offer isn't exactly a complex, multi-layered construction. There's a perfect rainbow race of Yoshis who have a Sundream Stone. Kamek and Baby Bowser steal said artifact. A bunch of gems neatly scatter from it – one world per precious stone. It's the ol' Chaos Emerald shtick, folks.

With the scene set, it's up to you (or you and a co-op pal) to run, butt stomp and dino-soar to new heights as one of eight coloured Yoshis. Standing in the way is an army of seemingly never-ending variations on Shy Guys, all of them coordinated to suit a particular level theme (think: spooky, ninja, space, etc). Crafted World definitely delivers on its moniker in this regard – each of these 2.5D environments is filled with lovingly hand-wrought sights to see. It's almost a pity then that you spend 90% of your time belting these creations with eggs to get it to collapse and make with the secrets.

Pelting your less-than-precious eggs at stuff is a major mechanic this time around. Dispensing with a gaggle of hockey-masked freaks is pretty familiar territory: you stick to a 2D yellow path and swallow up /recycle/throw an enemy at his mates. That said, your aiming reticle can now target nasties sitting in the foreground or lurking behind props in the backdrop of a level. Typically these targets come with a bit of depth-of-field blur to them, which means you'll have to be quite eagle-eyed if you want to nail the Smiley Flowers, Red Coins or Winged Blocks stashed about.

Crafted World starts out feeling pretty simplistic in terms of mechanics, but getting 100% on the 15+ worlds on offer will require some shrewd rationing of enemies/ammo, though the environmental puzzling never really gets very taxing. Most of the time you can solve any conundrum by taking a minute to hold down your egg aim to see what contextual hotspots light up behind or in front of Yoshi. One speculative egging later and the so-called hidden path will unfurl. But you know what? It's a Yoshi game, not a Donkey Kong Tropical Freeze. Skew your difficulty expectations for this down to "young and the-young-at-heart".

While Crafted World lacks in head-scratching conundrums and Joycon-throwing difficulty, it makes up for with gorgeous visuals, a diverse cast of baddies and...well, Poochies. For the newcomers, Poochy is a rideable canine ally who can punch his way through obstacles and enemies to destroy them. You can also tame three miniature Poochies who form an objective when levels are played from the backside (Nintendo's terminology, not mine). 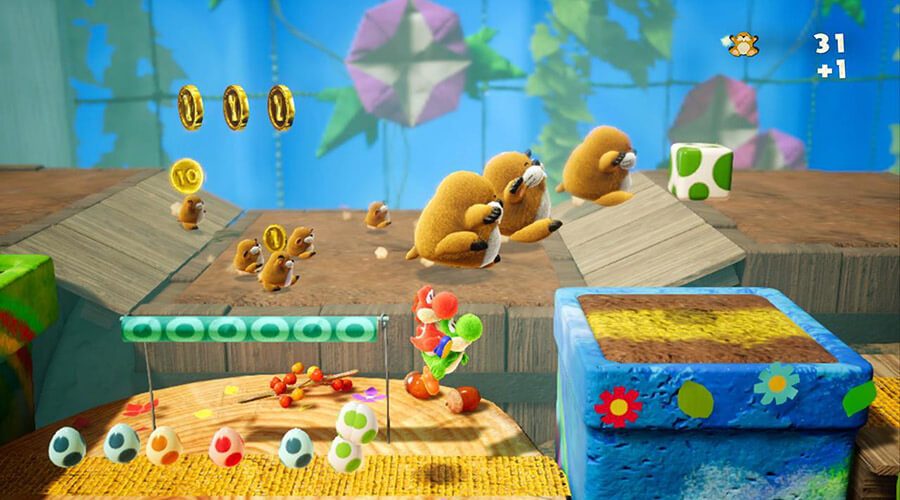 I should probably quantify that last bit. A major feature of the game is the ability to play the level backwards (after completing it once) in order to find and achieve a bonus objective for additional reward. Typically that payout will be the chance to gussy up your Yoshi with one of 170+ costume pieces that actually improve your stats. The collect-fest gets pretty addictive in the long run.

Understandably, in a two-player situation, the need to swipe goodies first makes for an interesting co-competitive dynamic, especially considering you can now bump into one another instead of ghosting right through. Your two Yoshi bros can interact with one another quite a bit, which makes for some hilarious trolling moments. I took great pleasure from riding about on my friend, making use of infinite eggs while yelling "mush!". In revenge, my cohort would suck me up into their mouth and keep me imprisoned for their amusement or do their utmost to avoid popping the bubble that would respawn me after I died. Good times. Good, antagonistic times.

When all's said and butt stomped, Yoshi's Crafted World probably won't strike fans as a huge leap over 2015's Woolly World. (In truth, the green one makes a jump and barely inches the fun-factor up to greater heights with that little kick-leg-hover of his.) The knitting aesthetic has given way to cardboard visuals but you'll still be in stitches with the right co-op partner by your side. Soloists won't be blown away by the fairly thin list of new gameplay twists, but there's still an enchanting collect-a-thon here that will swallow up your hours and poop out nothing but fond memories.

Yoshi's Crafted World was reviewed on Nintendo Switch with a copy provided by the publisher.

Saccharine sweet visuals, diverse worlds and great 2-player co-op action in abundance. But don't expect to be blindsided by a ton of new mechanics.

The Division 2 Review: Divided we fall (in love again) Days Gone Review: Gone right over the handlebars that is