The disaster waiting to happen happened, but the community remains less deterred than it perhaps should be.

The YAM token launched on 12 August 2020, depending on your timezone, and died a couple of days later.

It was a cryptocurrency chimera that combined the price target and rebalancing mechanism of Ampleforth, the governance of Compound, the spirit of YFI and the risk management of a sweet potato.

So naturally, people quickly pumped YAM up to a few hundred million dollars worth on paper before a bug was discovered and it all self-destructed.

At its monetary heart, YAM was based on Ampleforth, a cryptocurrency that targets a market price of $1 by periodically expanding and contracting its supply as needed, such that people will see the number of coins they hold changing. If it's above a dollar, the supply increases. If it's under a dollar, the supply decreases.

In the case of both Ampleforth and YAM, these economics turn the coin into a game of chicken where the goal is to ride the expanding supply (positive rebase) up as far as you dare before dumping your holdings. Dump too early and you miss the gains. Dump too late and you get caught on the underside of a dollar and put through the punishing negative rebase which simultaneously hits holders with a shrinking number of coins and a falling price.

It's not yet clear whether this is a novel financial primitive that will revolutionise finance as we know it or trick money that's best used as leprechaun gold for practical jokes.

YAM tweaked this formula slightly by converting a portion of each expansion into the yCRV interest-earning stablecoin which goes to the community treasury. Onto that trunk YAM grafted a branch of the Compound token, to add a governance module, which let the community of YAM holders vote on and take complete control over the entire thing.

It was then launched into the world like YFI; fully accessible and open to all, with no premine and laden with warnings.

"YAM holds zero inherent value... nothing approaching the rigor of a formal audit has been conducted at this time," it warned. 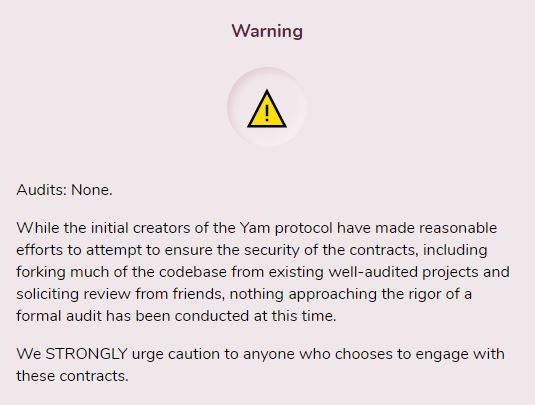 Those warnings turned out to be well justified, because there turned out to be a bug in the part that sends funds to the community treasury, such as that far too much YAM was being sent there.

As a result, the community would lose voting power to the treasury itself, a quorum would soon be impossible with so many funds locked away in the treasury and those funds were at risk of being locked away forever.

The bug became apparent after the first rebase, and the community had until the next one to fix it.

With the clock ticking, the developers hastily assembled a proposal to simultaneously pause the next rebase and transfer governance control to "a more nimble" contract, in order to buy some time for a proper fix.

The word went out for everyone to rally in support of the Yam Protocol, and in an inspiring act of motivated self interest, enough Yamsters answered the call for a new vote to be pushed through just in the nick of time.

Then there was some kind of complication with the way the contract works, the vote failed anyway and YAM imploded.

At the end of the day all the funds staked for YAM farming – $600 million worth at its peak – made it out safely, a comparatively small amount will remain guarded by the treasury forevermore. Anyone who managed to sell any of their crops came out with a profit and anyone who bought any of those YAMs wasted their money.

Sadly, YAM 1.0 died before a thirsty exchange like Poloniex could list it, which really inhibited the Yam community's ability to dump their worthless coins onto unsuspecting bagholders.

Fortunately there are plans to re-launch it with proper auditing as YAM 2.0. With any luck the next version will last long enough for the early birds to properly shill their garbage and profitably dump it on the suckers.

That's the end game. After all, the Yam Protocol governance system was unintentionally designed to turn YAM into a short-lived pump and dump scheme.

The problem with incentive mechanisms in cryptocurrency, and the world at large for that matter, is that it's sometimes hard to tell what exactly you're incentivising. With the profit incentives and governance token rewards common in cryptocurrency, it's worth stepping back and remembering that you're directly incentivising the community to seek profit, and that any governance which may occur as a result will be done in search of profit.

Bitcoin accidentally incentivised selfish and empty block mining, EOS incentivised the centralisation of its network under a cabal, and YAM is incentivising its community to operate a great big pump and dump scheme, because that's the only way you're going to squeeze a profit out of this impending dumpster fire.

We've seen more than enough of Ampleforth's economics in action to reasonably conclude that it's a trainwreck which won't unwreck itself, and the 48 hours YAM spent being shilled on this earth made it clear which way the wind was blowing.

It certainly doesn't help that a lot of exchanges are probably very keen to list YAM in order to get a cut of the profits from the dumping, so there's really very little anyone can do to prevent this from going badly.

People can say they're just doing it for fun, or that it's all just an experiment and caveat emptor and so on, but there's no escaping the fact that a lot of unsuspecting people are going to get burned by this hot potato, that a lot of fair comparisons will be drawn between DeFi tokens and ICO scams and that everyone knowingly stacking YAMs to dump later is at least slightly culpable.

But maybe that's the real experiment here; finding out whether a community built around a Ponzi-nomic token can somehow find a way out of its inevitable implosion.

Disclosure: The author holds cryptocurrencies including LINK at the time of writing.