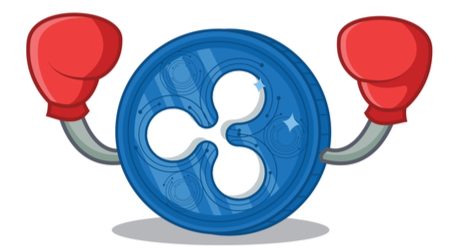 The position was short-lived though, as traders took advantage of the move to cash out, restoring the now-familiar hierarchy of the top three; bitcoin, Ether and XRP in that order. The last time this pattern changed was the very end of last year, on 29 December, as XRP prices briefly skyrocketed above US$3.

Right now, XRP is nipping more closely at Ether's heels than it has for a long time, through a combination of Ether's ongoing price slump and XRP's decisive rises in the last week.

XRP's recent rise is quite distinctive, and in some ways might feel a little bit like the "good old days" of less than a year ago, when big market cap cryptocurrencies would often swing 20% in a day (in both directions).

Smaller cap coins will still pull it off with aplomb, usually because they've been deliberately pumped and dumped, but it's much more difficult for a big cap coin like XRP to do the same.

In this case, the major catalyst was almost certainly the news that Ripple xRapid is likely to go live for commercial use in the next couple of months. Depending on how much appetite there is for Ripple's new solution, XRP could be sitting on completed fundamentals by Christmas.

That was probably the spark that lit this particular fire. Traders then fanned the flames by... well... trading. In most cases that involved heavy buying. This seems to have caused the initial sharp rise in the first couple of days.

But what goes up is generally expected to come down, proportional to the speed of its rise. And so traders started piling up the shorts in expectation of an XRP selloff. It probably would have seemed like a solid bet from most angles, with cryptocurrency markets typically being a see-saw of ups and downs.

It didn't eventuate this time though because apparently the buyers weren't done yet. The bulls fought off the bears, as zoologically-inclined analysts say.

The result was a pronounced short squeeze, with liquidated shorts causing prices to cascade higher. This is probably what gave XRP its second wind over the weekend.

I gather that 'short squeeze' has been respelled: $XRP

But as always, it's not yet possible to say whether XRP has found its fair price. As heady as the gains are, it's still more in the nature of regaining ground than going somewhere new. XRP prices are still well down from what they were in June, and pure speculation alone has previously been enough to see it go much higher and lower than it is right now. xRapid's release will bring more clarity to XRP's foundation, but that might take the form of traders deciding that the stuff is overvalued. The sheer magnitude of the international payments market might suggest that this is unlikely, and that there may be room for XRP to grow on its actual merits rather than pure speculation, but there are never any guarantees.

It's also worth noting that Stellar prices have been having a good time too. This should probably come as no surprise because Stellar (XLM) prices have always been a remarkable mirror for XRP, but it still suggests that the fight to become the international payments crypto is far from over and that traders continue hedging across both coins.

Of course, the percentage change of each doesn't tell the whole picture. The raw amounts of money involved in XRP are still much, much larger than XLM.