Get primed for Wolfenstein II with insights from developer Jens Matthies 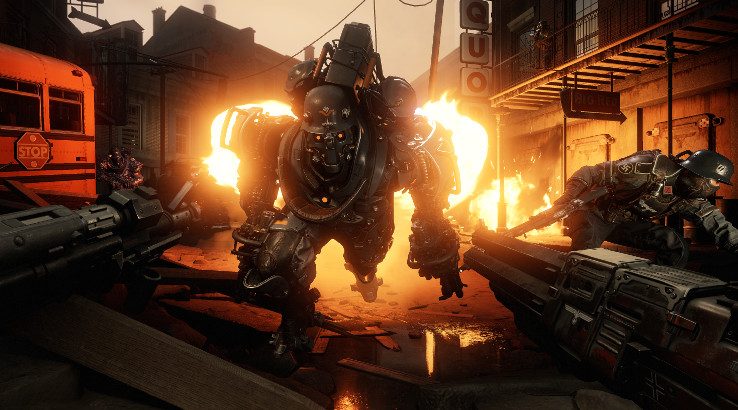 Nazis have taken over American and it’s up to an iconic gaming game hero to lead the resistance and fight back against evil.

On October 27, Wolfenstein II: The New Colossus lands on PS4, Xbox One and PC. It follows directly on from the events in 2014’s Wolfenstein: The New Order, and life isn’t looking too peachy in Earth’s alternate history – at least, not from developer MachineGames' perspective. What if the Nazis won WWII, then subsequently invaded the USA? And what if they doubled down on their military research, developing all kinds of twisted sci-fi death dealing devices?

More importantly, what if William "B.J." Blazkowicz wasn’t going to take that abuse lying down?

As the legendary character, you play a key part in The Resistance, opening cans of whoop-arse at such a rate it’s hard to take a breath. As you’ll read in our hands on (see above), this is a throwback action FPS that delivers big on explosions and travels at an insane pace. But it’s not without expert craftsmanship. Yesterday, I posted a story about how the studio has taken a unique – and invigorating - approach to its cinematography. It helps ensure the story and the characters will not be easily forgotten.

While chatting with the game’s creative director, Jens Matthies, I also got him to talk through many of the other development decisions that helped shape the game. It’s a great place to start getting your head around the game before its launch. Here is what he had to say:

Working on Chronicles of Riddick, The Darkness and now Wolfenstein, you’ve always created within the confines of existing material. Is this deliberate and something that specifically inspires you?

Yes and no. Whatever we do, we try and make it our own. So the feeling of working on it doesn’t feel like you are working on someone else’s material. But that said, we would love to do our own IP as well. Who knows what will happen in the future.

I think it is quite different, especially with Wolfenstein. It is something we hold in such high esteem. It has meant so much to us personally in a way that other IPs haven’t and I still remember touching the keyboard and walking down those hallways in Wolfenstein 3D when I was a kid. So for sure, it has a lot more personal significance.

The New Colossus is one of the fastest games I have ever played. It’s like an FPS on crack. But the world looks stunning if you ever stop to look around: what led to you deciding on the pace of movement and action in the game?

We actually support different kinds of playstyles. I’m kind of the same player as you in that I like to just rush in and annihilate everything, playing hyper aggressively. But you don’t have to play that way. You can take a very cautious and stealthy approach, and everything in between. So there are a lot of options I think.

Is there any point in the level design where you push the player towards stealth to kind of pull back on that full throttle approach?

I wouldn’t say so. There’s nothing overtly that way. But with Wolfenstein, we try to support varying approaches. So you can tackle everything in the game very cerebrally if you want, where you might enter an area and survey what is there before you leap into action. Where you try different approaches and different routes, and really explore the environment. But we don’t ever force the player to do one thing or another, it’s very much up to the individual and what they want the game to feel like.

That suggests a fair bit of effort in the positioning of your AI and the setup of your level design. What have you done to make sure that the player feels like they can take any approach?

It’s very time-consuming to do that and a lot of it is about playing the level over and over again, looking for opportunities as the various components trickle in. As you populate the level with enemies and work out the best places for cover and so forth, out of that comes new opportunities for ways of traversing the level. It’s very iterative, and you just need to spend a lot of time playing the game and making discoveries.

Well the stilts are a pretty awesome discovery, allowing you to suddenly grow 15ft tall and reach new areas or get a new bead on enemies. How many games do you expect to copy that mechanic in the near future?

We do a lot of thinking about how to create a holistic experience from start to end, and to try and give the players as many tools as possible to support their playstyles and their approaches to the world. I don’t know if the stilts would work independently of everything else we have going on, but maybe someone will take the idea forward.

MachineGames is shortly entering its ninth year: in a decade from now what kind of projects do you expect fans will see in the developer’s catalogue?

Wow, that is a good question. It’s hard to think that far ahead as the development of the games is so incredibly long and complicated, so you kind of need to do everything you can to rein in the scope of things. Otherwise it is too overwhelming. If I was thinking of three games at the same time, I wouldn’t be able to function, so we’ll just do one game at a time. It’s different for developers like Arkane when they did Dishonored 2 and Prey simultaneously, as they have two studios – one in Lyon (France) and one in Austin (USA). They can have two ecosystems running in parallel. But we don’t. And we know historically that whenever we have tried to branch off the team within the same building, it never turns out well. You start competing for resources, and it gets a little weird. We like the whole team to be focused on one thing as that gets us the best game in the end.