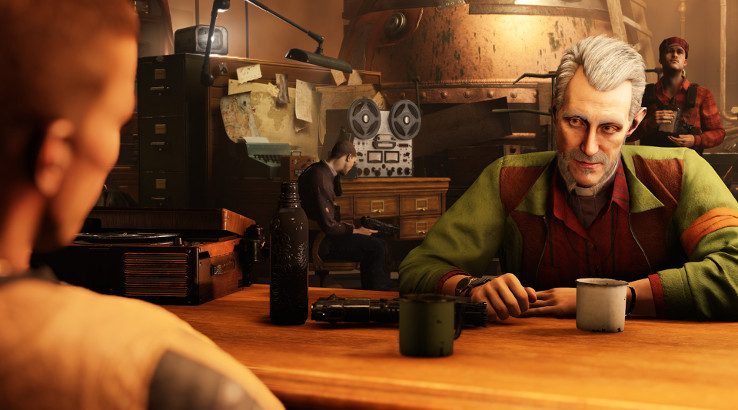 Wolfenstein II: The New Colossus is out on October 27, and it’s one of the most wonderfully shot games you’ll ever see. This is how MachineGames did it.

There will always be a place for muscular heroes that shoot first and ask questions later, especially if that place is an alternate history where the Nazis won. Such is the setting for the Wolfenstein series and the challenge facing hero William "B.J." Blazkowicz, which continues on October 27 with Wolfenstein II: The New Colossus. Available for PC, Xbox One and PlayStation 4, players are plunged into an oppressive, war-ravaged version of America’s cities where the Nazi occupiers – given the time to double down on their military experiments in the years since WWII – wield futuristic, destructive weaponry.

Set after the events of 2014’s The New Order, The New Colossus isn’t without a colourful spirit despite its dour premise. Alongside the cast of incredibly over-the-top, wonderfully-voiced characters, players experience the '60s-era cultural revolution and events like the hippie movement – or at least, the hippie movement through the lens of a Nazi invasion. Think drugs, sex and a Panzerhund (a rideable armoured dog, for those out of the loop).

I’ve only played a few hours of the game thus far, but one element that really stuck out for me – especially in a game focused on full throttle, explosive gameplay – is the cutscenes. Putting the controller down to willingly watch long scenes play out only works if said scenes are thoroughly entertaining. Ask Nathan Drake! Thankfully the cutscenes in Wolfenstein II: The New Colossus are quite incredible. It’s not just the aforementioned cast of characters and the bizarre setting that encapsulates; it’s the cinematography.

When I got a chance to interview Jens Matthies, creative director of Wolfenstein II and a co-founder of MachineGames, it was one of my first questions. How did he get such creative, unique camera work in his game? I found his answer incredibly insightful.

The cinematography in the cutscenes I have witnessed thus far is some of the best I have ever seen in a game. It feels different from anything I can recall; really inventive. Can you talk a bit about how you approached it and why you think going to those lengths was important?

Thank you so much! I’ve always been a big movie freak and I’ve always liked cinematography. I just love seeing amazing shots. There are a number of things that inspire me in terms of camera work - like Michael Mann movies, which I feel are incredibly strong. And what we have really pushed here - which I think is very appropriate to Wolfenstein - is very high energy, subjective camera work. So we have a lot of movement.

The process of doing those kind of shots starts with us separating the camera work from the performances. So we do the performance capture, simultaneously capturing the body, facial animation and voice of our actors. We have a studio where the actors do the scene as if it was a play more than a movie. Where we don’t really care about the camera work as we record the actors. This recording happens in Los Angeles, and when we have the perfect take in terms of the performance, we take that data back to Sweden.

It’s then, in the little motion capture facility we have at our studio, that we begin work with a virtual camera. This camera has got a screen - and you carry it around similar to how they would in Hollywood - but on that screen you see the scene from the game with the characters and what they are doing. The camera has a few markers on it so that it is tracked in 3D space, so as you move around the studio, the perspective on that screen will change.

It means we have the perfect take in terms of performance, and now we can do the camera work independently of that. So there is a lot of room for experimentation and we can build the scene gradually. I will walk around in that motion capture space with all its volume and do a shot, then I will drop that shot into the timeline. Then I will do the next shot and drop that into the timeline so we start building out the scene. Then we can go back and change shots if they are not quite working, ensuring it’s a highly iterative and experimental process.

This allows you to do things like very ambitious camera movements because you have an infinite number of camera takes without impacting the performance. It means the performance is always fucking amazing and you just have to try and capture it as well as you can. Sometimes I might do 30 takes. You need to get your movement precise and get it in your muscle memory so you know how to move through that virtual space. It’s a hugely gratifying creative process because you can reach for things that aren’t really possible any other way. Our scenes would never be possible if there were shot in the normal way.

As a big movie freak, you must have had some thoughts on who would play B.J. in a film adaptation of Wolfenstein: who would it be if you could choose anyone?

Well it’s incredibly hard for me to imagine anyone but Brian Bloom, who plays BJ in the game, because he so fundamentally understands that character. Plus he is just an astoundingly good actor! I couldn’t pick anyone else ahead of him.

Given this is an alternate history setting, how did you approach depicting the hippie movement?

We didn’t specifically think about it in that sense, it was more about thinking of how the 1960s would be – with all the cultural changes that happened then in the US – if the Nazis had taken over. Where the Nazis were trying to subvert any kind of expressions of freedom while trying to win the hearts and minds of the American people. That is something that we thought was incredibly interesting about the concept from the beginning – so it’s something we have been thinking about since 2010 when we starting brainstorming around this idea. It’s not specifically tied to hippie culture, but it’s a side effect of going deeply into this kind of subject matter.

Are there any Nazi hippies?

No unfortunately. I believe that would be a contradiction.