Why E*TRADE Australia is no more 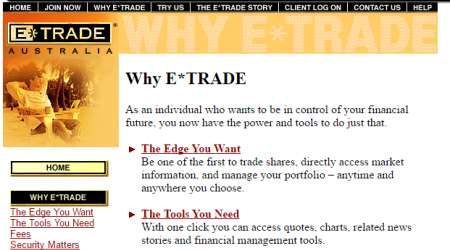 ANZ's decision to dump the brand shows how much the world has changed since 1998.

So this makes me feel old: ANZ this week announced that it was retiring the E*TRADE Australia brand for its online share trading service. From now on, it will be known instead as ANZ Share Investing.

I was working as a journalist when E*TRADE Australia launched way back in 1998. It wasn't a subsidiary of the original E*TRADE Financial, which started in the US, but had licensed the brand for Australian operations. (Eventually, E*TRADE Financial bought a stake in the company when it listed on the ASX, but it was never a majority shareholder.)

The online world was a lot more basic back then, as you can see from the screenshot from the original E*TRADE Australia site above. The majority of people were using dial-up connections. Virtually no-one was running apps on their phones (other than Snake). The hot Australian tech stocks were long-forgotten entities like Hotdog and Solution 6.

At that moment, the notion of buying and selling shares directly, without needing a broker or having to pay huge fees, and with a guarantee that the trades would processed quickly, seemed very exciting. Trading online was the future, and it would disrupt every major brand in the sector, we thought.

Trading online did indeed prove to be both the future of share investment and a massively disruptive influence. But the Big Four banks and others were ready to react to that disruption, and after the dot com "bubble" burst, they reasserted their control. ANZ eventually took over E*TRADE Australia in 2007.

Now it has concluded that there's more value in having its own brand front and centre than continuing to license the brand name from E*TRADE's parent company. "ANZ has a strong brand that is widely recognised and trusted among our customers, so it makes sense to move this platform under that banner," managing director for pensions and investments Peter Mullin explained.

Branding aside, the most notable shift is this: online share trading is cheaper than ever. When E*TRADE launched in 1998, it charged a minimum of $39.50 per trade. If that fee had risen in line with inflation, by 2015 it would have been $63.80.

Instead, the current rate for trades on ANZ Share Investing up to $5000 in value is just $19.95. Rival banks charge at similar levels. Succeeding in share market investment still requires careful planning and an appetite for risk, but it's nowhere near as expensive as it used to be. We're living in the e-trade era, even if the brand itself is disappearing.