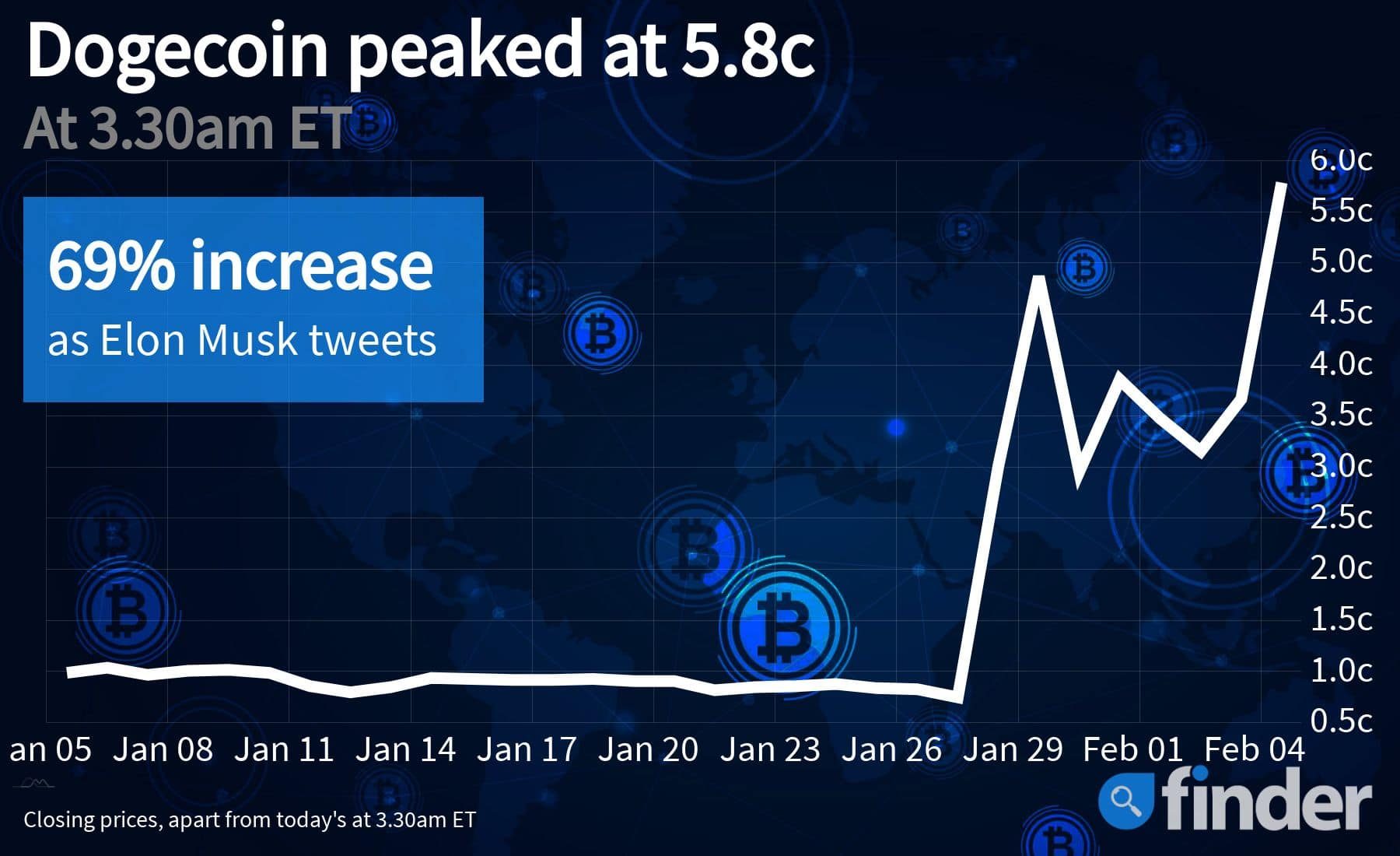 Eccentric businessman Elon Musk tweets in support of DogeCoin moving its price up 68.92%.

The tweets which have propelled Dogecoin into the spotlight yet again are the latest in a string of endorsements by the billionaire car maker in favour of the cryptocurrency markets' favourite joke coin.

Dogecoin was founded in 2013 by Silicon Valley software entrepreneurs Billy Markus of IBM software and Adobe software engineer Jackson Palmer. Its blockchain technology is similar to that of Bitcoin. More precisely it's a fork of the Litecoin blockchain. Both developers have long since left the project.

Dogecoin differs from Bitcoin in that its supply of coins is not fixed at a certain amount. In February of 2014, Jackson Palmer notified the DogeCoin community that supply of the parody cryptocurrency would increase by 5 billion Doge each year.

While it is unclear what effect this had on the price of Dogecoin over the years, the stated intent by Jackson is to keep the supply of Dogecoin "stable and maintain" the mining pools necessary for the altcoin's survival. Although Dogecoin has a reputation as a joke coin, back in 2014 the Dogecoin community invested in charitable endeavours. In 2014 a community fundraising initiative sprung up called Doge4Water. The fundraising effort raised money for clean drinking water through drought stricken regions in Kenya. In addition to that, the DogeCommunity held a fundraiser for the Jamaican bobsled team to compete at the 2014 Sochi Winter Olympic Games held in Russia. According to reporting by The Guardian at the time, as a result of the increased Bitcoin to Dogecoin transactions, the price of Dogecoin increased by 50%.

How to buy Dogecoin

Musk and the affinity with Dogecoin

The eclectic billionaire space adventurer made a cameo on the social app Clubhouse and commented on his fascination with Dogecoin: "Occasionally I make jokes about Dogecoin but they are just meant to be jokes,"

Not only is Musk famous for his business acumen, in 2018 he smoked the most expensive joint in the history of reefer. While chatting with Joe Rogan, the host of The Joe Rogan Experience, Musk sent shares in Tesla plummeting 10% or nearly $420 million at the time.

The only tweet of Musk's recent salvo that seems to make any sense as to why he would publicly back Dogecoin is where he termed Dogecoin "the people's coin." When added to that the meme of the rocket ship and the moon is a reference to the price of Dogecoin going to the moon.

Dogecoin is currently the 15th largest cryptocurrency by market capitalisation despite lacking active developers. According to CoinGecko.com Dogecoin is up by 1,879% in the last 12 months.

With the increase in Dogecoin's value, mining activities will continue into the future. Given the persistent inflation resulting from this, prices may suffer down the line. But with the price of DogeCoin being at $0.049, perhaps Musk sees something in it that others don't. Or perhaps his Twitter account was hacked or it was just a joke.

Hype aside, it's always important to be mindful of what you're actually buying before putting money into it.