How to watch (My) Truth: The Rape of 2 Coreys in Australia 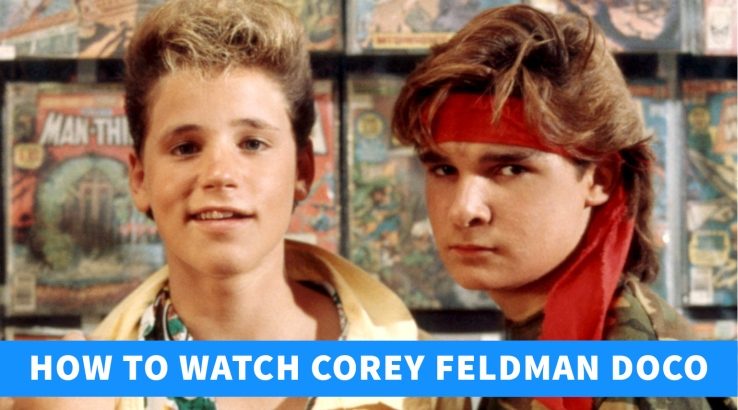 Actor Corey Feldman's controversial tell-all documentary will be a global, live telecast and you'll only have two shots at watching the live stream.

SUMMARY: The Corey Feldman documentary (My) Truth: The Rape of 2 Coreys is a pay-per-view event that will air at 2pm 10 March (AEDT) and 6am 11 March (AEDT). It will cost USD$20 (around AUD$30) to watch it, which you can purchase through the official website. Once purchased, you can sign in to the site to watch the live feed via a browser.

Corey Feldman's technical issues: The premiere of (My) Truth: The Rape of 2 Coreys was plagued by technical issues and wasn't able to be broadcast. It's understood that so many people tried to hack into the site to watch it for free, that the stream was unable to function for those who had paid. Corey Feldman has declared to find a way that every person who paid to watch the documentary will get their money's worth, and we'll update this page with more news as it comes.

Original Article: As Calvin Harris once sung, "I've got love for you if you were born in the eighties." Those of us who lived through this incredible decade will have no problem remembering the two Coreys. Corey Feldman and Corey Haim were big deals. They were the Kardashians of their day. Teen hits.

They starred in a string of blockbuster movies together, including Licensed to Drive, Dream a Little Dream and The Lost Boys. Corey Feldman, in particular, also racked up a catalogue of classic performances on his own, including The Goonies, The Burbs, Stand By Me and Gremlins. You can find a list of their best movies and where to watch them here.

However, the Coreys were also used, abused and spat out by a Hollywood machine at the peak of a cocaine mountain. It was an era when MTV was god, and the world turned in blissful ignorance powered by pop culture. This neon hyper-coloured high would require the dark flannelettes of grunge to balance the world back out. And when the nineties hit, the Coreys were left behind.

Both Coreys would go off the rails and spiral into their own self-destructive, ever-more-weird journeys into relative obscurity. But as the façade of the eighties crumbled alongside Michael Jackson's reputation, people couldn't help but wonder, "What happened to the two Coreys?"

How will (My) Truth: The Rape of 2 Coreys be broadcast?

(My) Truth: The Rape of 2 Coreys will be broadcast twice only as a pay-per-view event. This broadcast takes an interesting approach, especially in this climate of on-demand streaming giants and a rise in empty cinema seats thanks to coronavirus. However, it wasn't by design. The streaming giants – companies like Netflix, Amazon, Apple and Disney – wouldn't fund or air the documentary.

So, Corey Feldman funded it himself. This led to the unique distribution broadcast approach.

Feldman initially planned one singular pay-per-view airing of the documentary. A global, live broadcast that was available to access for anyone who pre-purchased tickets to watch. However, after many fans pointed out that the original time would make it the middle of the night in Europe, a second encore screening was also confirmed.

The reason that this approach has been taken is that the documentary will name names. This, you would think, will ensure that in its aftermath, a rather dramatic legal and police drama could unfold.

That said, while the contents of (My) Truth: The Rape of 2 Coreys and the insight into the heartache that the Coreys suffered will obviously be the main talking point, the documentary's release strategy could also be quite pioneering. This is a new way to release grandstand content, combining the big one-off pay-per-view sport event model with entertainment and the accessibility of live streaming.

How do I watch (My) Truth: The Rape of 2 Coreys in Australia?

The live broadcast of Corey Feldman's (My) Truth: The Rape of 2 Coreys will be available in Australia at the same time it's available everywhere else in the world. Whether you watch the initial screening or the encore, the cost for access is USD$20, which is approximately AUD$30.

The only place to buy tickets is directly through the My Truth Doc website. You can then sign in to the site to watch the live stream via a browser, or Chromecast it to your TV.

As a ticketed event, the server load should be manageable, as Feldman's team will be able to predict the exact demand.

What time does (My) Truth: The Rape of 2 Coreys start?

The first screening of Corey Feldman's (My) Truth: The Rape of 2 Coreys starts at 2pm AEDT on 10 March.

The encore screening will start at 6am AEDT on 11 March.

What is (My) Truth: The Rape of 2 Coreys about?

Corey Haim died on 10 March 2010. The official cause was pneumonia, but after years of mental illness, bankruptcy and drug addiction – much of which became apparent in the reality TV show The Two Coreys – many fans were left wanting for the true story.

It turns out that Corey Haim and Corey Feldman had made a pact together. If one of them was to die, the other would tell the full story of what happened to them as kids. The gruesome, brutal truth of it all.

Now, on the 10th anniversary of Corey Haim's death, a now 48-year-old Corey Feldman will air a single broadcast, followed by an encore, of that truth. And in the wake of the #MeToo movement and just days before the sentencing of Harvey Weinstein, the timing couldn't be more pertinent.

Will (My) Truth: The Rape of 2 Coreys be controversial?

Absolutely. In fact, Corey Feldman has revealed that he has received death threats ever since it was announced that he was working on the documentary. He has since stated that he feels his life is very much in danger and has hired 24-hour security. Feldman has said that he will reveal the names of the people who raped and abused Cory Haim and himself when they were children.

Feldman has also confirmed that other victims come forward in the film, and that one of the names in particular "is a name that everybody on the planet knows." This comment has led many to speculate that it could be the now-deceased Michael Jackson, who shared an awkward friendship with Feldman back in the eighties.

However, Feldman has described that individual as a powerful Hollywood figure.

Feldman has also stated that all the names in the film were given to police decades ago. It's because of the lack of action then, and for the sake of exposing these people on the behest of his friend Corey Haim, that he is taking a more theatrical approach now.

A fun thriller, an epic sci-fi and a dark teen drama are among our top picks this week.