eBay has a long history of driving payment platform growth, and ICE is eyeing consumer payments.

Intercontinental Exchange (ICE) is the parent company of brands including the New York Stock Exchange and the Bakkt Bitcoin trading venue.

While Bakkt was a (theoretically) significant addition to the Bitcoin trading ecosystem, its ambitions to create a consumer payments platform are arguably a much bigger deal. The Bakkt consumer payments app is due for release sometime in the next few months, with Starbucks as a launch partner.

Now there's a new puzzle piece on the board, with ICE reportedly making eBay a more-than US$30 billion takeover offer. The deal values eBay above its current $28 billion market cap.

eBay's business is based on enabling someone to do business with another person, and to do that, they first have to develop some measure of trust, either in the other person or the system." - eBay founder Pierre Omidyar, 2005

Digital currency and ecommerce are a good match, and it's easy to see why ICE would be interested in eBay for bolstering its consumer payments app.

One of the main reasons may be because it has a nice audience of about 180 million active buyers. That's about 375x the total number of unique Bitcoin addresses.

eBay also has a history of successfully shoving users towards certain payment methods. It made it mandatory for all sellers to offer PayPal as an option, and it has now started requiring them to join its new managed payments system.

For some background, eBay acquired PayPal in 2003 and drove an enormous amount of growth to it. They split into separate companies in 2015, but they signed a five-year agreement to continue operating together. That deal with PayPal expires this year. It's really easy to see why ICE would be interested in eBay as it seeks to enter the consumer payments space.

But it's been a rough ride for sellers overall, with countless reports of eBay chargeback fraud through PayPal, exacerbated by strongly pro-buyer refund policies. At the same time, PayPal prevented sellers from accepting credit cards through PayPal, which means anytime a buyer wanted to use a credit card for payment, sellers themselves were directly exposed to the inevitable chargeback fraud.

There's no trust between buyers and sellers in the hostile environment of the Internet, and if you believe the experiences of many sellers, the system itself is being eroded by that lack of trust.

To be fair, this is not exclusive to eBay, and it's also a bigger problem than you might think. As an industry, ecommerce fraud is growing about twice as fast as ecommerce is. Statisticians predict that by the year 2050, approximately 99.9% of all online transactions will be fraud attempts.

Cryptocurrency payments are a natural fit here in many ways.

First, there's the general growth of ecommerce, and the world's growing fondness for overseas sellers. This trend means international exchange rates are a growing burden, and a way of ducking those costs would be very welcome. All the other fees and frictions of international payments also apply here.

Direct cryptocurrency payments are one way around this, but digital assets can also substantially reduce the costs of exchange rates and international transfers with fiat currency.

The Stellar Lumens model provides one example of how you can do this. The basic idea is that a sufficiently liquid and frictionless marketplace can allow for automated exchanges at near mid-market rates.

So, instead of asking a third party to exchange one currency for another, you just go into the marketplace with the knowledge that there's always someone there offering the currency you want, and that with the help of an intermediary digital asset there will always be a path you can take — in the form of a series of trades at around mid-market rates — that will let you quickly exchange your currency for the desired currency.

You know who has highly liquid marketplaces and a penchant for digital assets? Intercontinental Exchange does.

Digital currency also lets buyers and sellers cut out third parties entirely, which opens up some new trust-building possibilities like fully automated double-deposit escrow services of the type you can find on some other crypto-friendly marketplaces.

With these, both buyers and sellers can put an agreed amount of funds into an escrow account, and the money will only be released when both parties agree that the goods have arrived as they should be and that their deal is concluded. If neither party can agree, both of them lose their money. The idea is to impose a cost for scammers, removing the incentive for them to ply their trade.

Various people have theorised that one of the reasons it's so hard to stamp out ecommerce scams is because it's currently a very lopsided arrangement, which provides only opportunity and almost zero risk for scammers. This dynamic has never really been challenged before, but maybe it should be.

Both of these factors; scam proofing and more affordable international payments, also tie into the ecommerce opportunities in emerging markets.

Total ecommerce transaction value is growing year on year everywhere, but certain regions are vastly underrepresented and have a lot of room to grow. 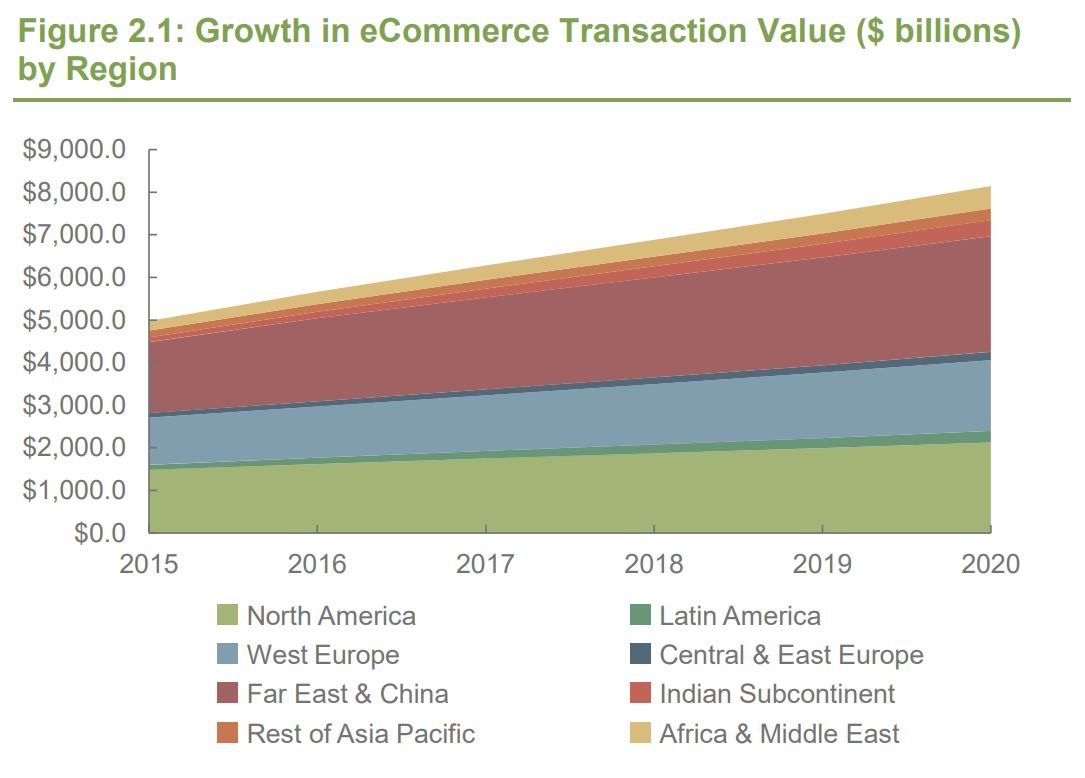 Intuitively, one could assume that this underrepresentation is due to the lack of banking infrastructure, the disproportionately high payment costs and the high fraud potential. After all, there's a reason sellers typically won't accept online credit card payments from Nigeria.

In theory, a platform that solves these problems could look forward to pretty explosive growth.

Of course, it's not a done deal yet. Maybe ICE will close the deal, then request a $30 billion refund because the goods arrived in bad condition?