“Affordable housing is also a priority.” But what’s really in the 2019 budget for home buyers? 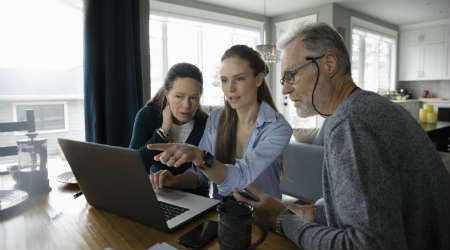 There is a $300 million increase in funds for social housing, but the 2019 budget is light on policies to help housing affordability.

Last night's federal budget served up a lot of spending announcements and tax cuts. But if you're a hopeful first home buyer or concerned about housing affordability there simply wasn't much on offer.

In his budget speech, federal treasurer Josh Frydenberg said "Affordable housing is also a priority for this government".

While this may be the case, there were no specific policies or spending announcements related to easing housing affordability or helping Australians save a deposit. Anyone hoping for a federal first home owner grant should probably develop a more realistic set of expectations for now.

But the government is spending more on social housing and that's significant. In total, the National Housing Finance and Investment Corporation will receive a $300 million package to help the states build social housing.

$30 million is allocated for the construction of 100 social housing dwellings in Greater Hobart.

Social housing is a vital, often neglected part of housing policy and greater supply of public housing will definitely help affordability over time.

But housing affordability is a national issue that's clearly weighing on the minds of Australians. A Finder survey released this week found that almost 48% of Australians with a mortgage struggle to make their monthly repayments. While recent price falls in some major cities have been significant, housing remains too expensive for many first home buyers.

Housing isn't an issue that falls along party lines either. Another survey just released by Rent.com.au found that 80% of Australian renters feel neglected by the major parties and their housing policies.

"We have all major parties talking about their potential changes (or lack of changes) to some of the core elements that promote investment in properties such as Capital Gains Tax and Negative Gearing," said Rent.com.au CEO Greg Bader. "Yet they do not seem to be able to articulate clearly how this will affect renters: will there be more choice; will prices go up or down? These are the things that the renting (and wider) population would like to know," he said.

Despite all this, there are some bright spots in the latest budget. CoreLogic head of research Tim Lawless notes the government's tax cuts will help first home buyers and borrowers facing mortgage stress. "With income growth slow additional cash in people's pockets each week is positive and could be moderately stimulatory from a consumer expenditure perspective," he said.

The government also made no mention of changes to negative gearing, a controversial benefit for property investors that the opposition has promised to phase out.

Removing negative gearing could help bring prices down but the flipside is that it could also hurt overstretched investors.