What’s in the future for Netflix? 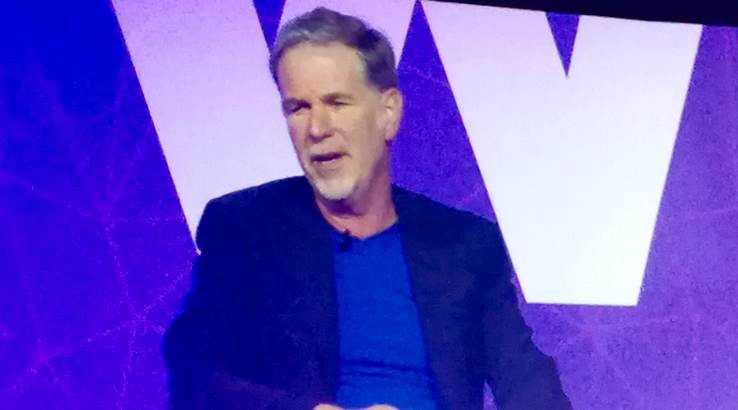 Netflix CEO Reed Hastings took to the stage at Mobile World Congress for a keynote interview to discuss the streaming giant's take on where streaming sits, and where it's headed.

First of all, he gave himself something of a pat on the back for Netflix's first Oscar, won this week for the short film The White Helmets. “We’re thrilled to be supporting The White Helmets,” he said, noting that at times it was difficult to watch.

"I think of that... and I complain about the line in my coffee shop? It’s incredible, and we're so thrilled that the academy honoured the film. It’s got some light moments too. It’s not all bleak," he told the audience.

With Netflix having launched globally last year at CES, Hastings says the service has seen some interesting trends on social media due to the global release of its own original programming.

“We’re so excited Netflix is available everywhere around the world. We’ve seen great mobile usage. It’s exciting to release content globally, and you see this amazing conversation. We just launched Ultimate Beastmaster, and it’s this global intense competition. It’s so exciting to see all the commentary. We can follow the Twitter and Facebook comments about the show around the world. To be able to go global and see what programming means when you do it all over the world... It’s very satisfying," he said.

Binge viewing is a somewhat controversial topic but Hastings has nothing but praise for it.

"Who hates binge viewing? Everybody loves it. It brings TV and movies back to the way it should be. The original binge viewing was the novel. You could do it at your leisure. The Internet has brought it back to human beings. You're going to see most linear networks convert to binge viewing," he said.

Hastings has some tough competition these days from services such as YouTube Red and Amazon Prime Video, but he’s simply happy to be part of the overall streaming picture.

“Now that internet TV is clearly the way things are moving, we have competition from all sides. They’re not trying to kill us, they’re trying to serve consumers, and that’s great," Hastings said.

"Lots of local networks in every country are bringing content onto the Internet. Ten or twenty years from now all the video you view will be online. One slice of that will be on Netflix. We want to stay at the forefront rather than getting run over."

Netflix relies on the widespread growth of internet services, and for its part, Hastings sees the development of more efficient codecs as key to solving broadband woes.

“Some of you are old enough to remember dial-up and that hissing sound. That seems like a relic. That’s what we want to make buffering," he said.

"We’re going to see some day the question of ‘You lived with that? Why didn’t it always start?’. We're investing heavily in networks and codecs so the experience is, there's no delay. That changes your relationship with the service. There's so much we've learned around the world with streaming and adaptive tech to continue to improve. YouTube too is learning a lot. Everyone is collectively making the experience better. We’re hoping to be able to get down to 200kbps to get a great picture."

In the mobile space, Netflix streaming is growing, and the company is seeking partnerships.

“We announced with LG yesterday integrating HDR into phones, so that HDR means white's really white, black's really black and it just looks incredible on the screen," Hastings said.

He admits that he's even a Netflix junkie on his phone, although not everyone is a fan of him doing so.

“I watched The Crown (entirely) on mobile but when I told the writer, Peter Morgan, he was aghast. Some people say that viewing, it’s got to be in the movie theatre. I think the screens today are just stunning. You can see all the depth right in front of you and you can watch it on the move. Old people may watch on big screens forever and young people adapt to the new paradigm. We want to be flexible so that we can be on any screen size," he said.

Hastings claimed Netflix is approaching some 100 million viewers worldwide, with about half of that group being international viewers. There are still some classic Netflix DVD subscribers in the US, as well, although he estimated those numbers at only around five million or so.

On the subject of Netflix becoming a verb unto itself, Hastings had to stifle a laugh.

“Well, there’s the other part of that. Netflix and... (laughter)

"Some of the verb uses of Netflix are not from us," he said.

As for a long term view of where Netflix will sit, Hastings isn't sure where they'll be in 20 to 50 years time, pointing to the growth of AI and uncertainty over whether that will lead to augmented humans, or AI that simply takes over everything.