The cryptocurrency markets are plummeting harder than usual.

The last 24 hours brought a fresh world of pain to cryptocurrency prices. Whatever's been causing the slow bleed of crypto prices has apparently hit an artery.

However, the refreshing side of the news is that bitcoin has remained pleasantly stable against the hellscape that is the altcoin market. Stablecoins have similarly been in-demand and straining upwards against their pegs.

This is a general continuation of previous trends over the last few weeks, with the happiest indicator being bitcoin's relative resilience against the rest of the market. It's now comfortably above 50% market share for the first time all year.

Note that Dentacoin's recent rise relative to the rest of the market is probably just a pump and dump, rather than people investing in dental health during a bear market.

Things aren't so happy on the other side of the fence, with people enthusiastically divesting themselves of altcoin holdings. Shout out to Zilliqa for the big three-zero. 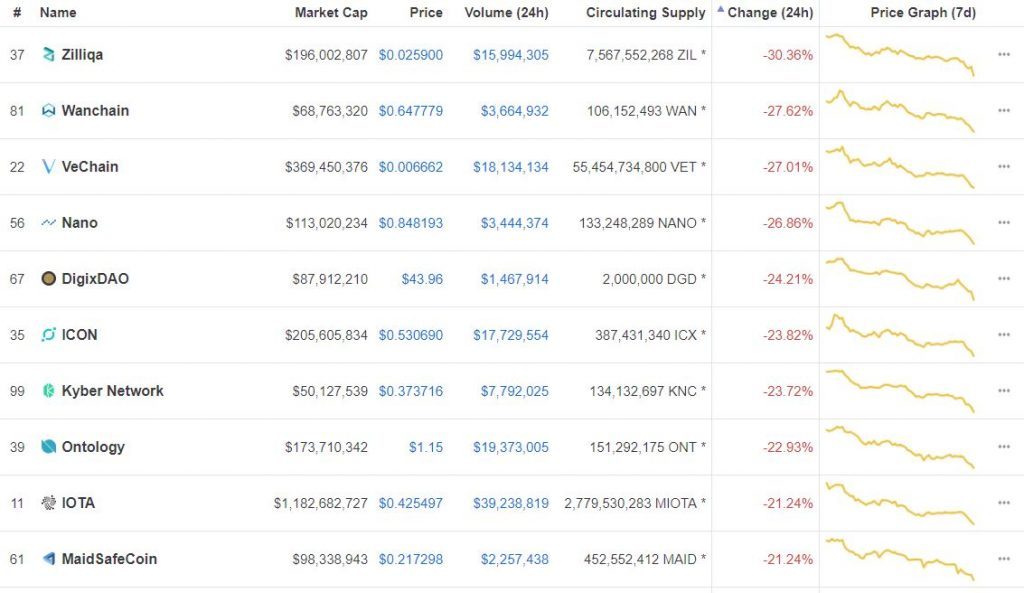 The not nice part.

One of the more notable trends is the platform coins, including Ethereum, sinking harder than most. This might be attributed to developers and project owners cashing out to make sure they can still keep the lights on even while the market continues falling.

Other than that it might just be a good old fashioned bank run on the altcoin markets. Previous expectations of rises have evaporated and bears now roam the streets, mauling altcoin holders.

It's raining blood out there, and if there's one chart that can capture the precipitous rainfall it might be the total cryptocurrency market cap over the last 24 hours. The last half hour, at the time of writing, has been quite eventful and if you listen closely you can almost hear people around the world slamming the sell buttons.

It might not be a bad idea, because apparently the floor hasn't been found yet. All that's left to do now is either get in (buy), out (sell) or shake it all about (hodl) while you do the hokey pokey and wait for the markets to turn around.

Cryptocurrency trends and the MEME, ROPE and FEW trilogy

The brief rise and fall of Ethereum's…

Kraken's journey to being the USA's first…