Quick verdict: If you're after a simple purifier with a visual indicator of air quality and you can live without remote or app access, the Welcare PureAir Desktop Air Purifier does the trick. Air quality is an important part of our lives, given that we do indeed all need air to live. The promise of the Welcare PureAir Desktop Air Purifier is that it offers a compact, affordable way to clear the air, or optionally scent it up for smaller rooms. It's mostly successful at doing this, although it is limited due to a lack of remote or app controls. 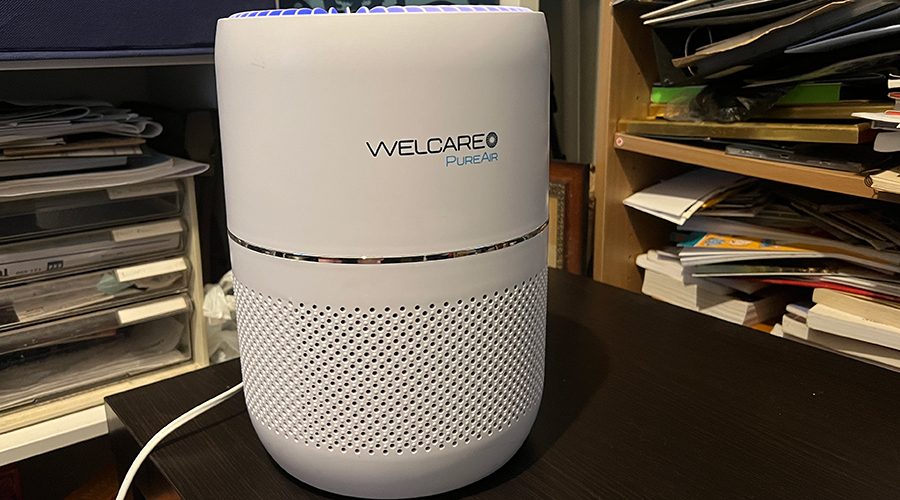 There's a famous anecdote about how the lightsabers in Star Wars were made from flashguns from specific 1970s-era camera parts, and looking at the Welcare PureAir Desktop Air Purifier, I can't help but think of that story. Not because it looks like a lightsaber, but because its central fan design, and specifically the way it lights up in different colours depending on air quality. They would, if you're thinking of making your own Star Wars fan film, also make a nifty X-Wing engine array. 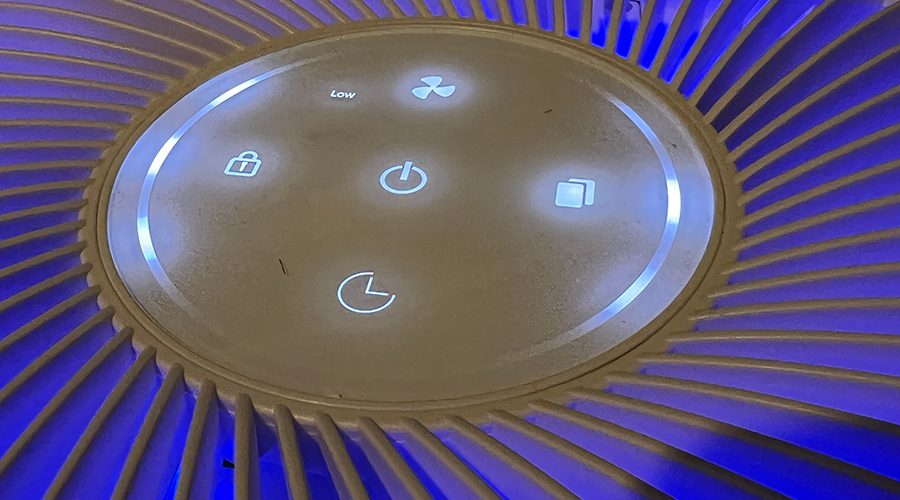 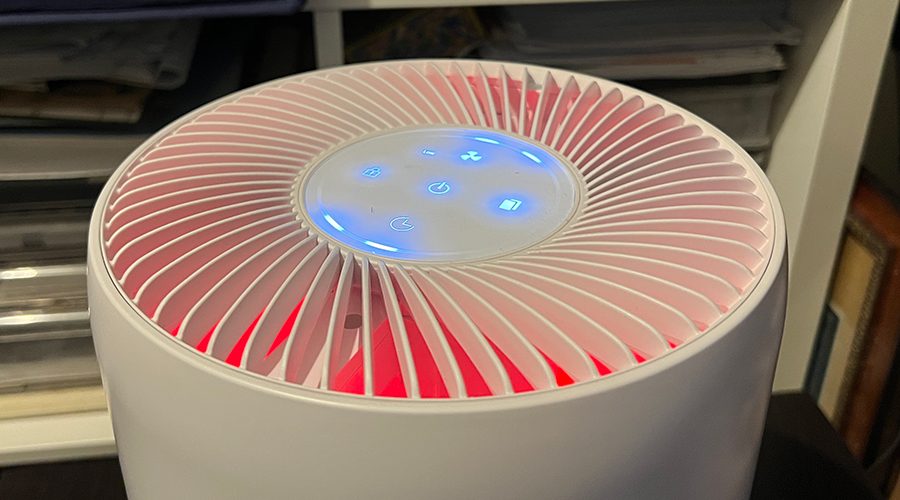 Not that this is what Welcare has in mind for them, of course. The Welcare PureAir Desktop Air Purifier is a small, bin shaped air purifier with a selection of touch buttons at the top middle, surrounded by fixed plastic blades in a classic fan array. Beneath that there's a simple RGB LED light above the actual filter unit. The power cord is fixed into place, which has some implications for long-term use.

Set-up is quite simple, involving nothing more than twisting and popping the main bin open to reveal the pre-bagged HEPA filter. Remove the filter and bag, tear off the plastic, replace the filter and you're ready to start cleaning up the air. The filter enclosure area is also where you can add aromatherapy oils if that's your thing with a pair of sponges that you can soak as required. I have serious issues with strong perfumes and scents, so I can't really speak to the efficacy of this particular function, although it's not hard to see how it would help slowly spread scents of your choice within a single room.

The desktop name does rather give it away, but the Welcare PureAir Desktop Air Purifier is a small filter unit. That's great if you do want it to move around with you into a new room on demand, because at 2.5kg it's very easy to lug around the house. I'm not so sold on the idea of it being a "desktop" unit, unless your desk could already accommodate something the size of a small bin in the first place. In terms of clear air propagation, placing it on the floor feels like a smarter move.

Performance: Easy touch controls, but no remote or app Controlling the Welcare PureAir Desktop Air Purifier is done purely via the touch panel at the top of the device. For smaller rooms where you're more likely to place it near you while you relax or work that's not a huge problem, but competing devices in this price range do offer up either remote controls or smartphone-based app support as well. That would allow you to start up your air purifier before stepping into, say, your home office on a regular basis. The best the Welcare PureAir Desktop Air Purifier can offer is a timer-based option for how long it will run before switching itself off.

The Welcare PureAir Desktop Air Purifier picked this up quite quickly, because like its bigger sibling, it uses a colour system to give you an indication of ongoing air quality. Blue is your gold standard for detected particles as "perfect", while green indicates "good", purple is "normal" and red is "bad" air quality. Unlike the larger unit which did dip into the red when I had a nearby BBQ going, the Welcare PureAir Desktop Air Purifier never went beyond purple in my testing. That's a good thing for my lungs, for sure. 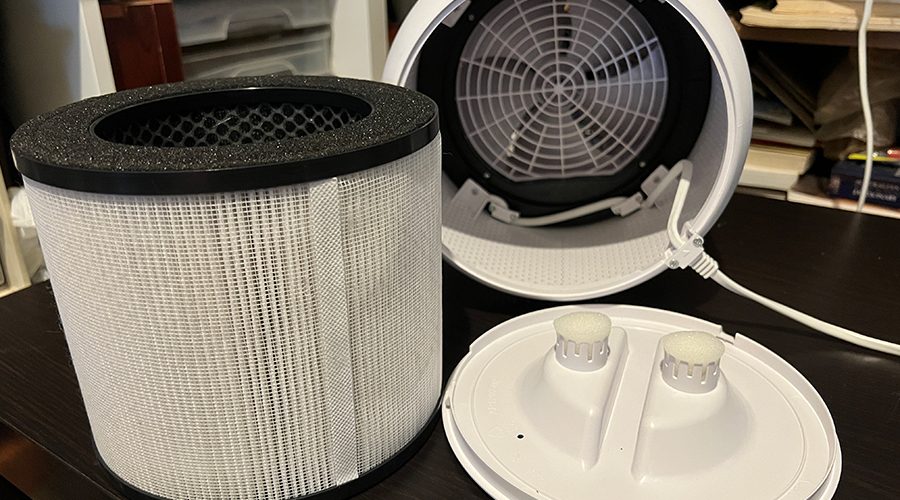 Welcare advises that the HEPA filter in the Welcare PureAir Desktop Air Purifier complies with HEPA13, which means that it should filter out 99.95% of particles at least 0.3 micrometers in size. That may include virus particles, although there can be variance in size there due to the moisture droplets they typically attach to. That does mean that the use of a HEPA13 filter as found in the Welcare may have a role to play in reducing the spread of certain pandemic-causing viruses… but I didn't have a way to properly assess that, and to be entirely fair to Welcare, it's not a claim that's made about the Welcare PureAir Desktop Air Purifier specifically.

Over a 2-week testing period, I did notice the air quality in my home office was clearer and cleaner when I went in there after a relatively brief period of filter operation. The air flow through the Welcare PureAir Desktop Air Purifier isn't massively fast, even with the fan at high speed, with a CADR of 103m3/hr. That's eminently suitable for a smaller room space, however. The fan at full high speed kicks in at 55dB.

What I found was that while the faster fan was better if I wanted the filter to change from green to blue more rapidly, most of the time I could use it in auto setting, where it tended to stay in the quieter low mode a lot. The low speed mode is very quiet, so if you have any other noise in your room, it will almost certainly drown out its quiet sound. 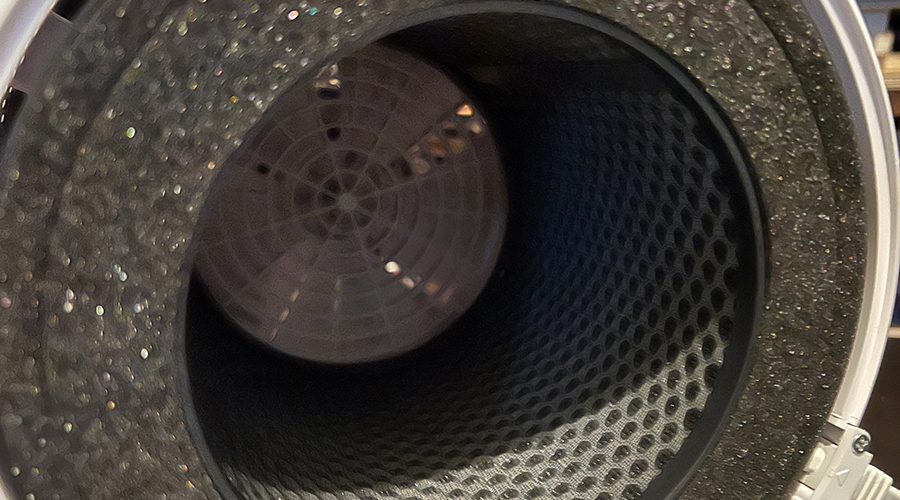 Should you buy the Welcare PureAir Desktop Air Purifier?

There are a lot of these smaller air purifiers in the market right now, all at around the same kind of price point as the Welcare PureAir Desktop Air Purifier.

It's a nicely simple unit to use, and the lighting array makes it very easy to get an at-a-glance view of your air quality over time. However, some competing units do offer remote controls or app access, and that's just not part of the Welcare PureAir Desktop Air Purifier's offering. 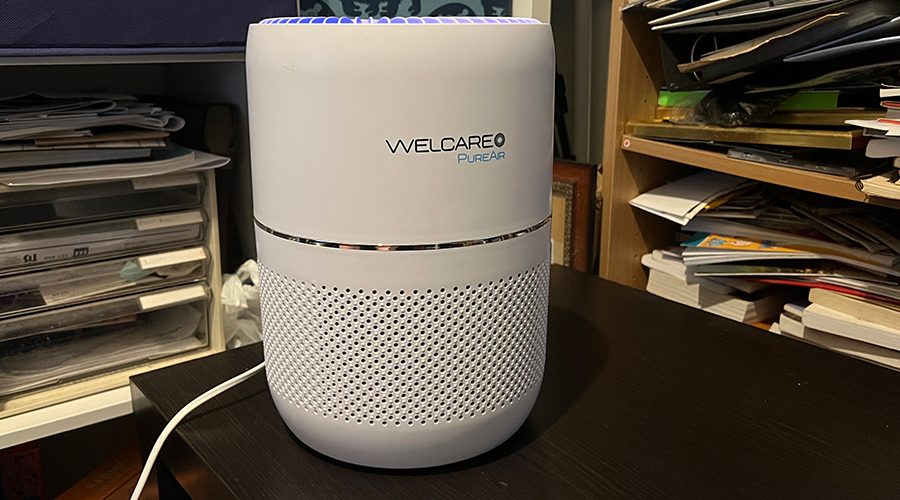 I was supplied with the Welcare PureAir Desktop Air Purifier by Welcare for the purposes of review. I tested it in my Sydney home, primarily within my home office over a 2-week period including several very hot days and some days of heavy rain where air quality did vary markedly in the testing space. I tested the Welcare PureAir Desktop Air Purifier for ease of use, subjective evaluation of air quality before and after running and ambient noise in a room with and without music and other audio sources playing to see how intrusive its use was.