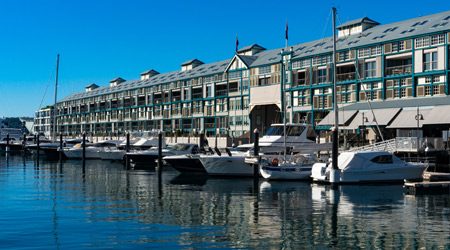 Woolloomooloo is surprisingly homely despite its proximity to Sydney’s hustle and bustle.

So here I am in week four after the locations of Double Bay, Watsons Bay and Manly.

It has been so much fun. For a person that is always trying to find amazing new locations all over Sydney I am loving that I am still finding hidden gems. As you can see, I like a view and being close to the water. Since we live on the most beautiful harbour in the world not to live near, or at least play in it, is a travesty.

The whole reason I started this experiment is because I applied to rent a property on the Wharf at Woolloomooloo. Although I applied for it through 1form and was accepted, the agent didn’t realise I had offered $50 less than the asking price per week and so it fell through.

I like the idea of living on the Wharf because it’s close to everywhere: Water views, great pubs and bars and some of the silliest people watching on earth. I wanted to find out if you could still feel relaxed and homely rather than right in the thick of the city. I did. I wanted to make sure that living on the wharf was not too noisy. It wasn’t. I also didn’t want to feel like my mate did when he walked down Riley Street from William Street and thought he was going to get mugged on the way. I didn’t.

Clipp has a number of options, like the Woolloomooloo Bay Hotel, at big discounts. A little farther away you have the Riley Street Garage where you can knock back some of the most addictive truffled oysters you have ever enjoyed. Harry’s is close and always open for that late night snack. Then you also have the Wharf restaurants. I will be honest, I have never really seen the draw card.

So that leaves these restaurants as a place to be seen or to see people. I ate at both China Doll and Manta. China Doll’s food is great and feels clean and crisp. Manta was good, and the Miso Toothfish was garnished with friendly service.

Cabs are cheap into the city at $8-10, and to the airport it’s about $45 depending on traffic. I only used a cab once, as the walk is easy and scenic. Heading to work by foot is a breeze. You can either wander around past one of the coolest public swimming pools and through some of the most beautiful water-lined parks, or you can cut through the Domain for a faster trip for those mornings when you have had too many espresso martinis at dinner the night before.

If you have not walked down the centre of the Wharf, you should. It’s fascinating. Hollow and dark with a real industrial feel. The rooms are on all different levels and make up lofts and open plan single level one-bedders. There are more than 300, ranging from studios at about $575 per week right up to huge penthouses in the thousands per week.

Ovolo, the hotel in the Wharf was a perfect stay; Free mini bar, free drinks during happy hour every night and free breakfast. You also get a loot bag in your room when you arrive. The staff are smashing. I had a small issue with my room and the response I got from the hotel manager was so bloody funny I totally forgot what I was complaining about and it was fixed before I stopped laughing! I will remember this long after I have forgotten the free beer and great room.

I really like Woolloomooloo. I think I would prefer to live in Watsons Bay if I had a chicky babe of my own; however, since I am in the market to catch one, Woolloomooloo or Double Bay might be a better place to live. No doubt about it, it is the most convenient location close to the water that I have been to. I would have to get a balcony apartment which means spending around $700 per week and I wouldn’t mind if it looks cityside (slightly higher rent) or onto Potts Point. This is looking like the best option so far.

I have one more location to try, and it’s one I snuck in at the last moment. I thought, why not live on George Street for a week and see how that feels? So where do you stay on George St? Well it goes by many names: “the Dry Cleaners”, or “the Stab”. It has salsa on Tuesday nights and it’s entertaining on every other night.

Each week Byron Matthews will review a different Sydney suburb he's always wanted to live in.