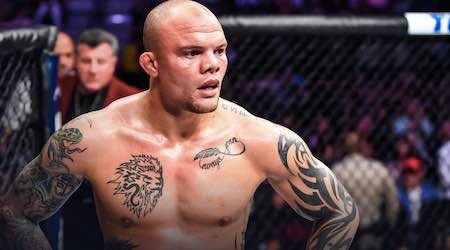 The return of live MMA action continues with UFC Fight Night: Smith vs Teixeira from Jacksonville. This is how you can watch.

Just 5 days after the epic UFC 249 event, light heavyweights Anthony Smith and Glover Teixeira will square off in the latest UFC Fight Night.

The second of 3 UFC events all being staged at VyStar Veterans Memorial Arena in Jacksonville in an 8-day span, there are 11 fights listed on another packed schedule. Veteran heavyweights Ben Rothwell and Ovince Saint Preux will meet in the co-main event.

When does UFC Fight Night: Smith vs Teixeira start?

The preliminary card gets underway at 8am AEST on Thursday 14 May in Jacksonville with 6 fights. The main card commences at 11am AEST with a further 5 match-ups.

How to watch UFC Fight Night: Smith vs Teixeira

ESPN is the host broadcaster for UFC Fight Night: Smith vs Teixeira. That means Foxtel iQ, Foxtel Now, Kayo Sports, Fetch TV and UFC Fight Pass are all viewing options. If you don't have a Foxtel subscription, Kayo is the way to go. We have compiled a complete viewing guide for the UFC for you.

If you are yet to try Kayo Sports, it currently has a 14-day free trial for new users. That means you can check out this UFC Fight Night and the next one on 16 May for zero cost before deciding if the service is right for you.

Typically covering more than 50 sports, during the coronavirus pandemic Kayo has been showing loads of timeless content, including classic matches and the 30 for 30 series. As professional sport starts to return, Kayo has a range of special features such as SplitView, which allows you to watch four events on the same screen. Interactive Stats, No Spoilers, Key Moments and Kayo Minis are other options.

Once you decide to sign up, Kayo starts from $25/month for the Basic subscription, which gives you access to 2 screens or devices. It also has a Premium subscription that gives you another device for $35/month.

Foxtel Now is the pay TV provider's digital streaming service. You have to subscribe to the Essentials pack in addition to the Sport pack which costs $54/month in total.

If you haven't tried it previously, Foxtel Now offers a 10-day free trial. We have also put together a full guide for you which includes the list of compatible devices.

UFC Fight Pass is the promotion's own streaming service. You can pay either $10.99 per month or $104.99 for an annual pass. That gives you access to every UFC event, including pay-per-view. It's compatible with smartphones and laptops, Xbox One and Xbox 360, Apple TV, Chromecast, Roku, Samsung and LG Smart TVs.

Who will win Smith vs Teixeira?

These two fighters are at very different stages in their careers, but could well be chasing the same prize. At 31, Smith would still expect to have plenty of his career ahead of him. Coming off a loss to Jon Jones in UFC 235 in March last year, he responded with a victory over Alexander Gustafsson 3 months later to leave his record at 33-14 overall.

Teixeira, who turned 40 in October last year, must surely be in the dying stages of a career that started way back in 2002. He also lost a light heavyweight title shot to Jones in 2014. Teixeira has won his past 3 fights to show there is life left in his 30-7 record to date.

It will be intriguing to see the shape these fighters are in following the enforced coronavirus lay-off. Teixeira has enough tools and fighting nous to trouble Smith, but we'll opt for the younger fighter to prevail in a third-round knockout.