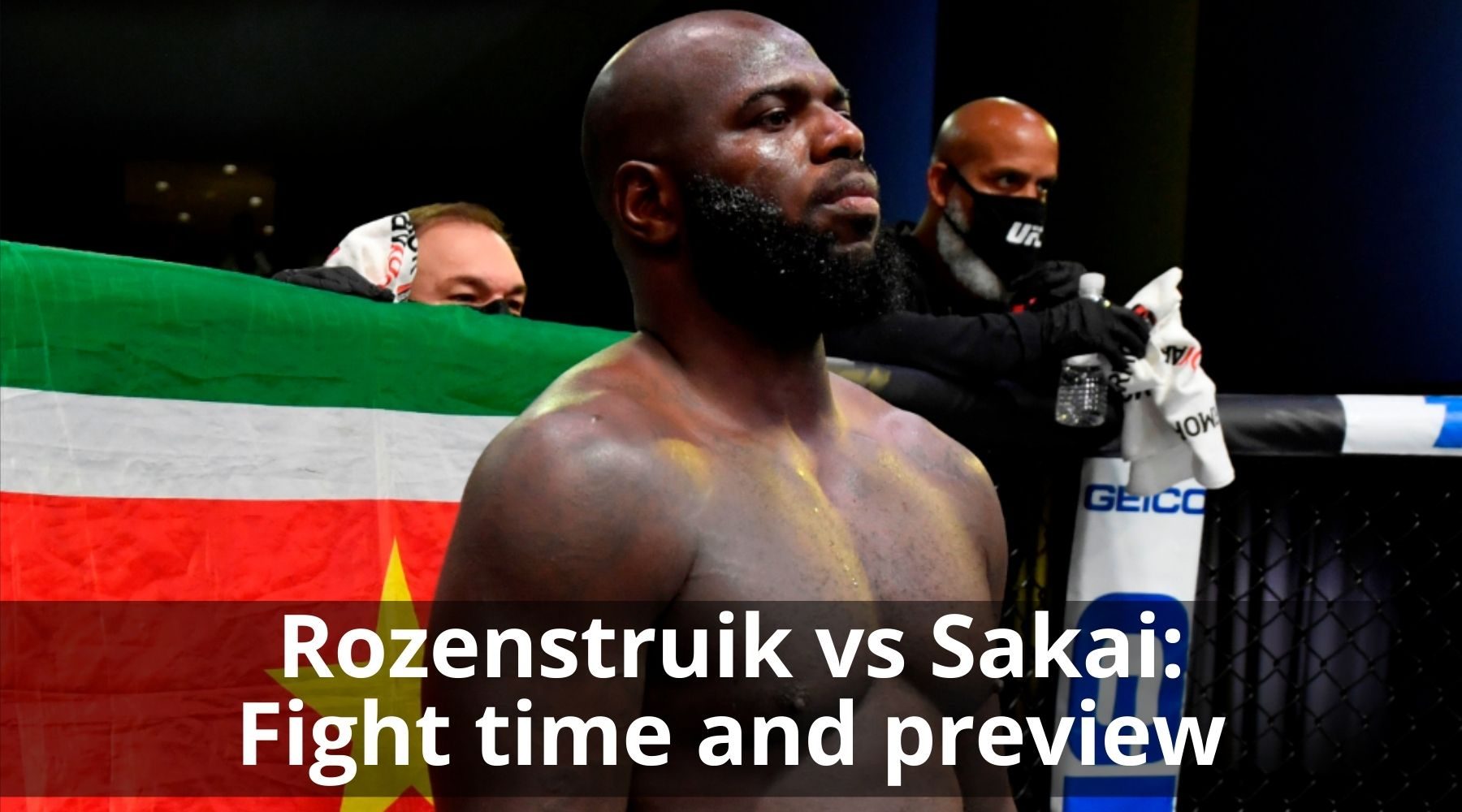 SUMMARY: UFC Fight Night: Rozenstruik vs Sakai is exclusive to ESPN. Unless you're already a Foxtel customer, your best option is to watch live on Kayo Sports. You can watch for free using this 14-day trial.

UFC Fight Night: Rozenstruik vs Sakai, also known as UFC Vegas 28, is a match-up of two fighters coming off losses. Yet a strong win for either man could bring a title chance within their grasp given the shifting nature of the division.

Rozenstruik, ranked seventh in the heavyweight division, has won one and lost one since he suffered a huge knockout at the significant hands of Francis Ngannou a year ago. He knocked out former heavyweight champion Junior Dos Santos before losing a unanimous decision to Ciryl Gane in five rounds back in February.

Brazilian Sakai returns after a loss – a fifth round TKO – to Alistair Overeem last September. He had been expected to fight Russian Shamil Abdurakhimov in May, only for the bout to be cancelled due to Abdurakhimov's visa issues.

Heavyweights Walt Harris and Marcin Tybura will compete in the co-main event.

When is UFC Fight Night: Rozenstruik vs Sakai?

The preliminary card gets underway at 6am AEDT on Sunday 6 June with eight fights at the UFC APEX in Las Vegas. The main card is scheduled to start at 9am AEDT with a further six bouts.

How to watch UFC Fight Night: Rozenstruik vs Sakai

The broadcast home of UFC Fight Nights in Australia is ESPN. The preliminary card and the main card are all on the broadcaster. That means Foxtel iQ, Foxtel Now, Kayo Sports, UFC Fight Pass and Fetch TV are all options for you to catch Rozenstruik vs Sakai. For more information, we have a UFC viewing guide.

Kayo Sports has a 14-day free trial available for new users. So you can watch Rozenstruik vs Sakai and much more for no cost.

After that, Kayo starts from $25 a month for the Basic subscription, which gives you access to 2 screens or devices at once. A Premium subscription gives you a third device for $10 more.

Boasting more than 50 sports and the new Ultimate Fighter season, Kayo also has a range of special features unmatched by other services. SplitView allows you to watch four events on the same screen. Interactive Stats, No Spoilers, Key Moments and Kayo Minis are also options.

Kayo is compatible with Android and iOS devices, PC, Mac, Apple TV, Telstra TV, Android TV, Chromecast and Samsung TV (2017 or later). It's all in our Kayo Sports review.

How to watch UFC Vegas 28 via Foxtel Now

Foxtel Now is the pay TV operator's digital streaming service. To access Foxtel Now, you need to subscribe to the Essentials pack and the Sport pack, a total of $54 a month. Foxtel Now also has a 10-day free trial for new customers.

You can sign up to UFC Fight Pass to access Rozenstruik vs Sakai for either $10.99 a month or $104.99 for a discounted annual pass. It's compatible with smartphones and laptops, Xbox One and Xbox 360, Apple TV, Chromecast, Roku, Samsung and LG smart Tvs

Who will win UFC Fight Night: Rozenstruik vs Sakai? 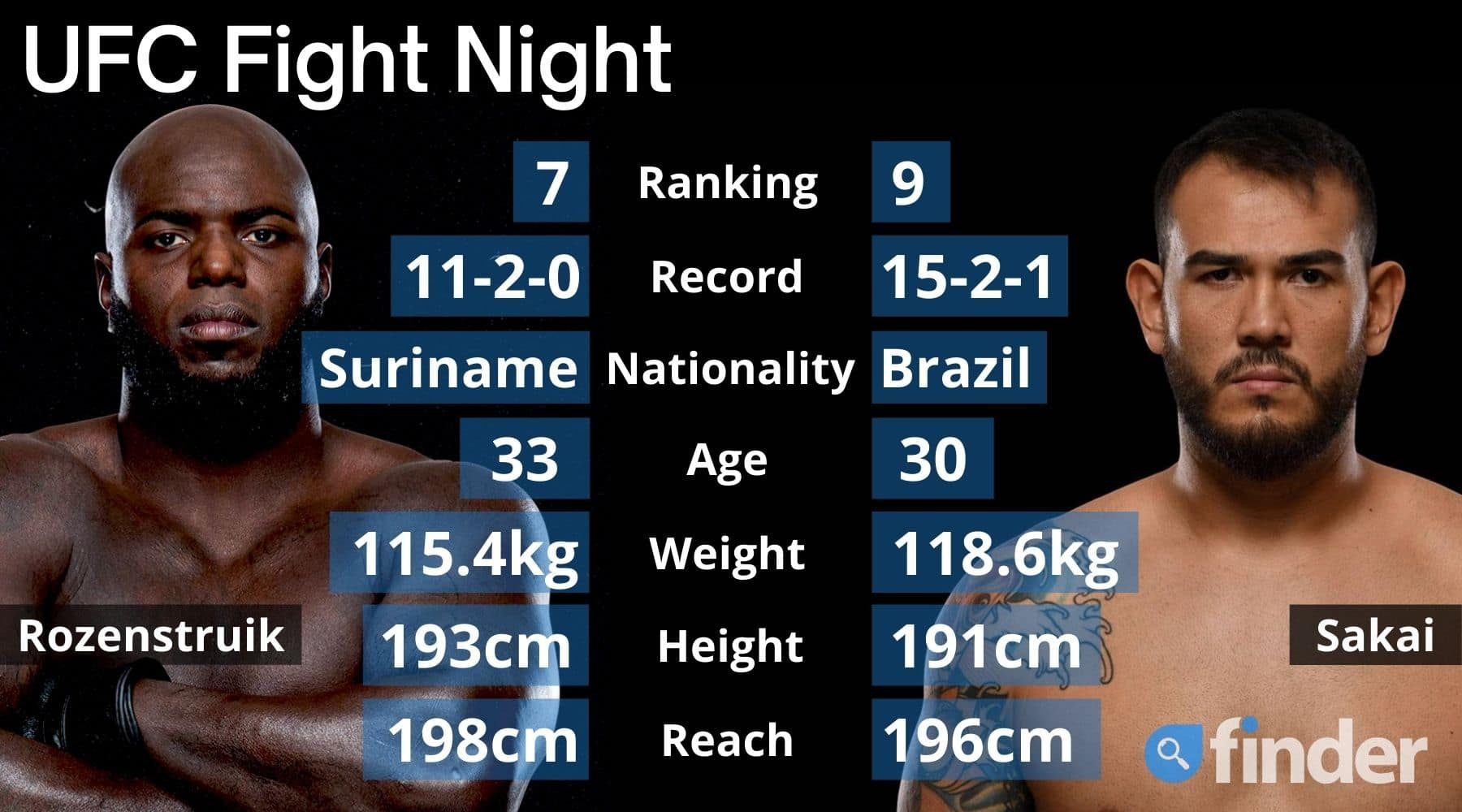 For the Brazilian to have any chance he needs to either take it to the ground or, as Gane did against Rozenstruik in February, stay outside and make it a technical fight.

Watch for the heavy hands of Surinamese Rozenstruik to make light work of his younger opponent if he gets the fight on his terms.

Adesanya, McGregor, Volkanovski? See when they next fight with our UFC schedule. If you're still not sure who to stream with, we've got a Foxtel vs Kayo comparison so you can decide which one suits you best.