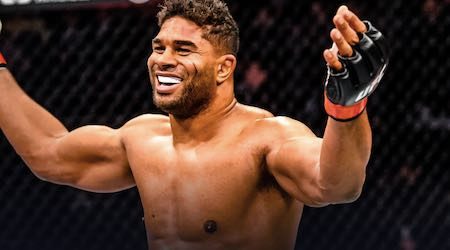 The third piece in the UFC trilogy of returning events concludes with UFC Fight Night: Overeem vs Harris, once again in Jacksonville.

The UFC has been one of the first sports worldwide to return to action since the commencement of the coronavirus pandemic. UFC 249 and UFC Fight Night: Smith vs Teixeira were both staged in the past week, with no fans and virtually without a hitch.

Now the third event in just eight days is ready to roll out, headlined by a clash between veteran Alistair Overeem and fellow heavyweight Walt Harris.

There is also a co-main event, a women's strawweight clash between Claudia Gadelha and Angela Hill.

When does UFC Fight Night: Overeem vs Harris start?

The preliminary card gets underway at 8am AEST on Sunday 17 May in Jacksonville with 6 fights. The main card commences at 11am AEST with a further 5 match-ups.

How to watch UFC Fight Night: Overeem vs Harris

ESPN is the host broadcaster for UFC Fight Night: Overeem vs Harris. That leaves Foxtel iQ, Foxtel Now, Kayo Sports and UFC Fight Pass as viewing options. If you don't have a Foxtel subscription, Kayo is the best option. We have compiled a complete viewing guide for the UFC for you.

If you are yet to try Kayo Sports, it has a 14-day free trial for new users. That means you can check out this UFC Fight Night and much more for zero cost before deciding if the service is right for you.

Typically covering more than 50 sports, during the coronavirus pandemic Kayo has been showing loads of timeless content, including classic matches and the 30 for 30 series. As professional sports start to return, Kayo has a range of special features for you to enjoy. SplitView allows you to watch four events on the same screen. Interactive Stats, No Spoilers, Key Moments and Kayo Minis are other options.

Once you decide to sign up, Kayo starts from $25/month for the Basic subscription, which gives you access to 2 screens or devices. It also has a Premium subscription that lets you watch on another device for $10 more per month.

Foxtel Now is the pay TV provider's digital streaming service. You have to subscribe to the Essentials pack in addition to the Sport pack, for a total cost of $54/month. If you haven't tried it yet, Foxtel Now offers a 10-day free trial. We have also put together a full guide for you which includes the list of compatible devices.

UFC Fight Pass is the fight giant's own streaming service. You can pay either $10.99 per month or $104.99 for a discounted yearly pass. That gives you access to every UFC event, including pay-per-view. It's compatible with smartphones and laptops, Xbox One and Xbox 360, Apple TV, Chromecast, Roku, Samsung and LG Smart TVs.

Who will win Overeem vs Harris?

The first thing to note here is this fight is unlikely to go the distance. Overeem's record of 45-18 includes 27 knockouts and 17 submissions. He has fought in just about every mixed martial arts forum you can name and turns 40 a day after this match-up.

Harris's (13-7 record) knockout clip is even more impressive. All 13 of his wins have come that way. Overeem's resume is far more eye-catching, including a loss to heavyweight champion Stipe Miocic back in 2016. But at 36 years of age, Harris has time on his side.

Overeem's best hope would likely be to land one of his heavy punches on Harris's at-times suspect chin early on. But we expect the younger man will slowly work his way on top of the Dutchman, who is one place ahead of him at eighth in the heavyweight rankings, and move on to bigger challenges. Let's opt for a third-round knockout.