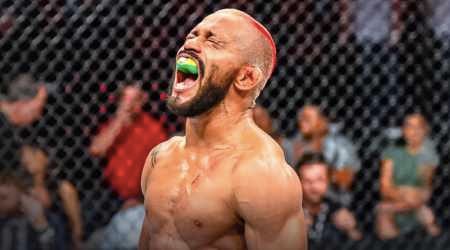 Deiveson Figueiredo faces Joseph Benavidez again for a second shot at the vacant flyweight title. This is how you can watch the UFC live.

Deiveson Figueiredo and Joseph Benavidez meet for the second time following their match-up back in February. Figueiredo won that bout with a second-round TKO and should have taken the flyweight title belt vacated by the retired Henry Cejudo.

When does UFC Fight Night: Figueiredo vs Benavidez 2 start?

It all gets underway at 7am AEST on Sunday 19 July with 7 bouts on the preliminary card. The main card then commences at 10am AEST with a further 5 fights.

How to watch UFC Fight Night: Figueiredo vs Benavidez 2

UFC Fight Night: Figueiredo vs Benavidez is being broadcast by ESPN in Australia. That means Foxtel iQ, Foxtel Now, Kayo Sports, UFC Fight Pass and Fetch TV are all options for tuning in. We compare these options below, or you can also check out our complete viewing guide for the UFC.

After the trial period, Kayo costs from $25/month for the Basic subscription, which gives you access to 2 screens or devices at once. For $10 more per month a Premium subscription gives you a third device.

Kayo also has a range of special features for you to enjoy. SplitView allows you to watch four events on the same screen. Interactive Stats, No Spoilers, Key Moments and Kayo Minis are also among the options.

Foxtel Now is the pay TV operator's digital streaming service. To access this you need to subscribe to both the Essentials pack and the Sport pack, a total cost of $54/month.

Foxtel Now does have a 10-day free trial. We also have a full guide to Foxtel Now.

UFC Fight Pass is the fight leader's own streaming service. It comes with two subscription models: $10.99 per month or $104.99 for a discounted annual pass. It's compatible with smartphones and laptops, Xbox One and Xbox 360, Apple TV, Chromecast, Roku, Samsung and LG smart TVs.

Who will win Figueiredo vs Benavidez 2?

Figueirido (18-1 record) must be so eager to make the weight and leave with the belt he will feel he should have claimed the first time around. Alternatively, Benavidez (28-6) must be buoyed by the second chance at glory few people ever earn. Benavidez has fallen short in four previous title shots, but we'll back the American to make it fifth time lucky in this one.

Western United will be keen to atone for their first up defeat when they host the dangerous Perth Glory.

Liverpool host Arsenal in a fight for the top 4 in the Premier League this Sunday.

Newcastle host to Brentford in the Premier League.

Leicester City are scrambling to stay in touch with the top 6 and they will be in desperate need of points when they face league leaders Chelsea on Saturday.