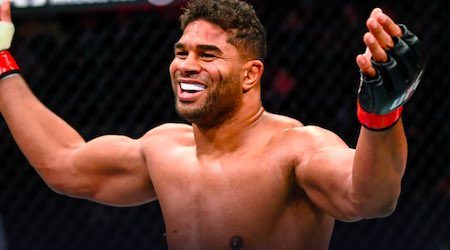 It's Overeem vs Rozenstruik in the main event of UFC on ESPN.

SUMMARY: The best value-for-money option when watching UFC on ESPN live is through Kayo Sports. You can watch the entire Overeem vs Rozenstruik fight card for free using this 14-day trial. This gets you access to all its unique features and 50 additional live sports.

Two big heavyweights go toe to toe when Overeem and Rozenstruik do battle. It's been a while between drinks for Overeem, but he will be out to prove a point against the upcomer Rozenstruik.

Veteran mixed martial artist Alistair Overeem was set to fight Walt Harris late last year, but the disappearance of Harris' stepdaughter Aniah Blanchard and subsequent discovery of her body led to it being cancelled in an awful, tragic turn of events.

Dutchman Overeem spoke of his heartbreak for Harris, who had become a friend, before Surinam's Jairzhinho Rozenstruik was named as the replacement fighter.

Rising strawweight contenders Marina Rodriguez and Cynthia Calvillo square up in the co-main event and penultimate fight of a busy evening of UFC.

Who will win Overeem vs Rozenstruik?

Overeem is well known to most UFC fans and bounced back from consecutive losses to reel off back-to-back wins leading into UFC on ESPN 7 and is considered a slight favourite.

Former kickboxing champion Rozenstruik is relatively new to the UFC octagon and is undefeated through nine fights to date.

Both are blessed with excellent finishing skills, while "The Demolition Man" Overeem has a significant height and reach advantage. The 39-year-old may well need it against a man 8 years his junior.

When is UFC on ESPN 7 Overeem vs Rozenstruik?

You can whet your appetite with UFC Live (10am AEDT) and the UFC Fight Night Pre-Show (10:30am AEDT) on ESPN before the action gets underway with the prelims at 11am AEDT. The main card gets underway from 1pm AEDT.

It follows a huge boxing rematch between Anthony Joshua and Andy Ruiz Jr.

Where is UFC on ESPN 7 Overeem vs Rozenstruik?

The event is being held at Washington DC's Capital One Arena.

How to watch UFC on ESPN 7 Overeem vs Rozenstruik

This UFC event is live and exclusive on ESPN, which means there are a number of different ways to follow the action.

Whether your preference for MMA is to watch via pay TV or streaming platforms, here is all the information you need to follow the action live.

UFC is just one of the more than 50 sports on offer on Kayo Sports, live and on demand. A Basic subscription costs just $25/month and means you can watch on two screens simultaneously. There is also a Premium subscription for $35/month which supports three screens at the same time so you won't miss a thing.

Either option gives you access to the platform's entire library and list of features. With the sports streaming service, you can watch up to four videos at once on the same screen with SplitView, check out the stats with Interactive Stats and avoid those results you aren't ready to see just yet with the No Spoilers setting.

You can also jump straight to Key Moments or watch a Kayo Mini to get all the best highlights in 20 minutes or less. It's all in HD and there are no contracts, so you can cancel your subscription at any time.

New subscribers can test out a 14-day free trial for Kayo, which is available via the website or you can download the app to your smartphone or tablet. It's also compatible with Android TV, Apple TV, Chromecast, AirPlay, Telstra TV and Samsung TV (2018 or later).

Watch UFC on ESPN 7 Overeem vs Rozenstruik with Foxtel IQ

ESPN comes with the Foxtel IQ Sports HD channel pack. If you are already a subscriber, you can watch the UFC event on TV or stream it to your laptop or mobile with either WatchESPN or Foxtel GO. Both apps are free with your Foxtel Sports HD subscription.

Right now you can take advantage of Foxtel's Christmas sale and get Foxtel Plus and Sports HD for $58/month on a 12-month plan, reduced from $86/month, with a deal that expires on 24 December.

This deal also gets you iQ4, Foxtel's most advanced set-top box that enables you to watch content in 4K and record live TV.

Stream UFC on ESPN 7 Overeem vs Rozenstruik with Foxtel Now

Fight fans also have the option of streaming the event on ESPN via Foxtel Now, the service that lets you watch Foxtel channels live and enjoy on-demand content via the Internet.

You need the base Essentials pack, at $25/month, plus the Sport channel pack at an additional $29/month.

You can follow along on your laptop of mobile device with the Foxtel GO app, while the service is also compatible with Airplay/Chromecast, Telstra TV, Sony Android TVs, PlayStation 4 and the Foxtel Now box. New subscribers are also eligible for a 10-day free trial.

ESPN is available with Fetch TV as part of the Vibe channel pack. You can get that for only $6/month, but buying your Fetch box outright or through a broadband provider will impact the total price of your subscription.

A subscription streaming service often compared to Netflix, UFC Fight Pass is another option for watching Overeem take on Rozenstruik. This service allows you to watch UFC events live and watch on-demand content for a monthly cost of $7.99/month.

If you want to check it out first before committing it offers a seven-day free trial. It is compatible with smartphones and tablets, PCs and Macs, Xbox One, Xbox 360, Apple TV, Chromecast, Roku, Samsung and LG Smart TVs.