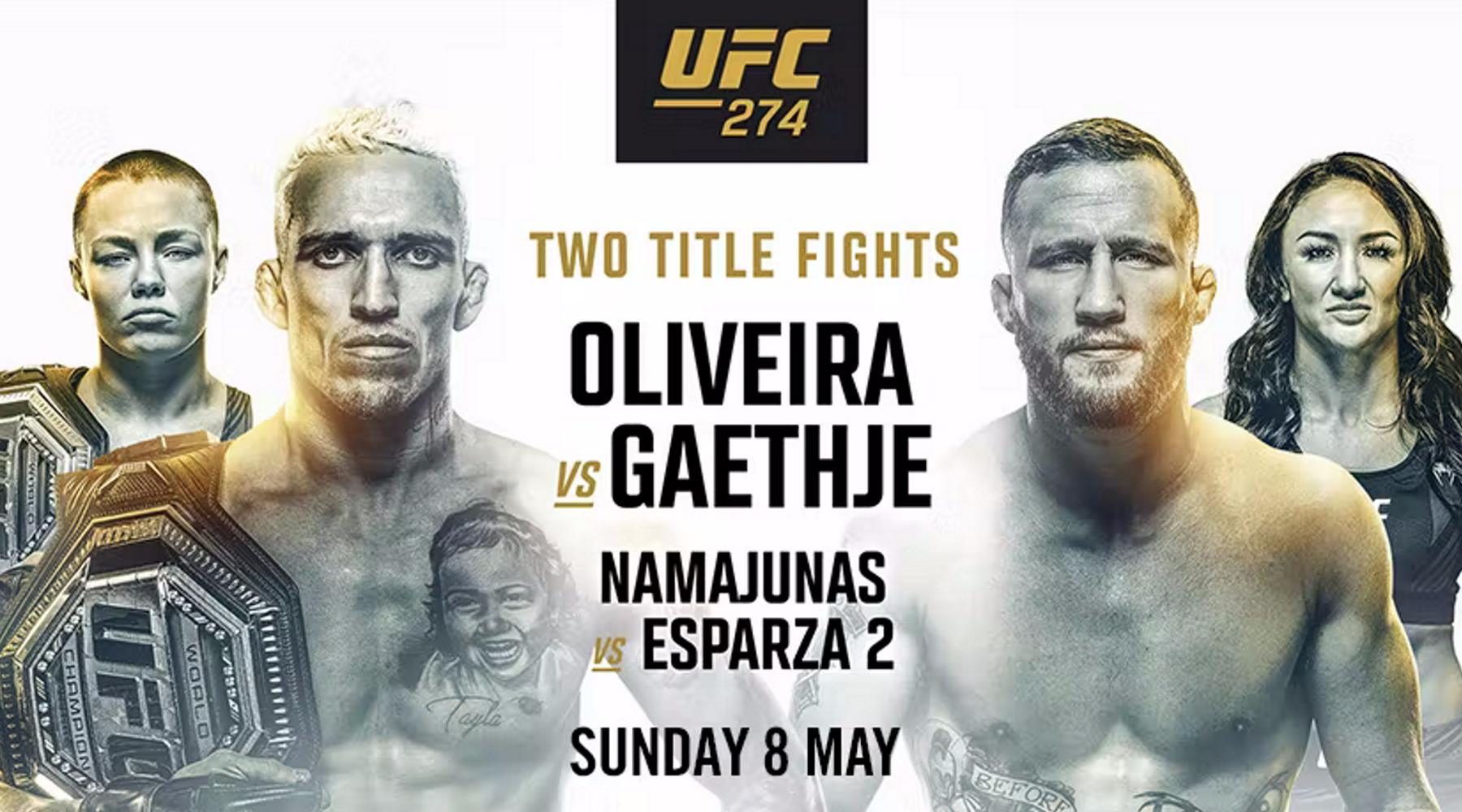 Arizona plays host to a huge UFC 274 fight card this weekend as Charles Oliveira and Justin Gaethje battle it out for the Lightweight title.

SUMMARY: Oliveira vs Gaethje is live and exclusive to Main Event or UFC Fight Pass. The most accessible way to stream the fight live is through Main Event via Kayo Sports, which costs $54.95.

UFC 274 arrives in Arizona this week with the home crowd set to get behind their local hope Justin Gaethje as the 33-year-old fights for the UFC Lightweight title against the defending champion, Brazilian superstar Charles Oliveira.

Gaethje last took to the Octagon at UFC 268 when he defeated Michael Chandler. Oliveira defeated Chandler to claim the title belt at UFC 262 before defending it successfully at UFC 269 against Dustin Poirier.

What time is UFC 274 Oliveira vs Gaethje in Australia?

This card gets underway on Sunday 8 May with the main action starting at 12pm AEST at the Footprint Centre, a multi-purpose sporting arena in Phoenix, Arizona.

The preliminary cards will begin at 10am AEST.

How to watch UFC 274 Oliveira vs Gaethje in Australia

There are a range of viewing options for UFC 274. ESPN is showing the preliminary card which means you can watch with a regular subscription on any of Foxtel, Kayo Sports, Foxtel Now, Fetch TV and UFC Fight Pass.

You can see our complete guide to watching the UFC in Australia here.

How to watch UFC 274 Oliveira vs Gaethje preliminary card

As the preliminaries are on ESPN, you can follow along with Foxtel, Kayo Sports, Foxtel Now, Fetch TV and UFC Fight Pass. Among these options, Kayo is the pick for live sport.

Kayo has more than 50 sports for you to choose from, including access to every single UFC Fight Night. You can get a Basic subscription to Kayo for $25 a month which allows you to watch on 2 screens. For $35 a month a Premium subscription gives you 3 screens. Take note though, Kayo's prices and packages are changing very soon.

Kayo is currently offering a 14-day free trial so you can see if it's right for you.

It boasts a range of features and is compatible with PC, Mac, iOS and Android devices, Chromecast, Apple TV, PS4, PS5, Telstra TV, Samsung TV, LG TV, Hisense TV and Android TV. You can check out our full Kayo review for more information.

When it comes to the 5-fight main card, Main Event on Foxtel, Kayo, UFC Fight Pass, Fetch TV and PS4 are the exclusive providers. You will need to purchase the fight to watch it live or catch a replay, unless you are heading to your local watering hole. Read on to find out more about watching the UFC 274 main card.

If you have a Foxtel iQ subscription, UFC 274 will set you back $54.95. You can place an order via the Main Event website, using the My Foxtel app, your Foxtel remote or over the phone. You can also order the fight if you have Optus TV featuring Foxtel by contacting Optus direct. Ordering through a phone agent will incur an additional $2 booking fee.

New, returning or existing Kayo Sports customers can watch directly through Main Event. By Heading to Main Event on Kayo, you can sign up and watch it through your usual Kayo platform. It costs $54.95 to watch. All the information you need about getting Main Event on Kayo can be found here.

The UFC's official website is another option for watching the fight. It will cost you $54.95 through UFC Fight Pass. You can also sign up to Fight Pass for $10.99 a month or $104.99 a year for an annual pass.

Stream Oliveira vs Gaethje on your PlayStation

If you have a PlayStation 4 or 5 console, look for Live Events in the PlayStation store. Once you have purchased the fight you can watch it through the "videos" menu. It is $54.95 or $49.95 for PlayStation Plus members.

How to watch UFC 274 with Fetch TV

Oliveira vs Gaethje will also cost you $54.95 with Fetch TV. Using your Fetch box, go to "Manage" and then "Subscriptions". Once you make the purchase you can watch it on TV or your mobile with the Fetch app.

Charles Oliveira is on a 10-fight winning streak having stopped his opponents in 9 of those fights. He fought twice last year, claiming and defending the Lightweight title in the process. He has 32 wins from 41 starts.

Justin Gaethje has won 23 of his 26 fights and has been described as "the human wrecking ball" in many circles. 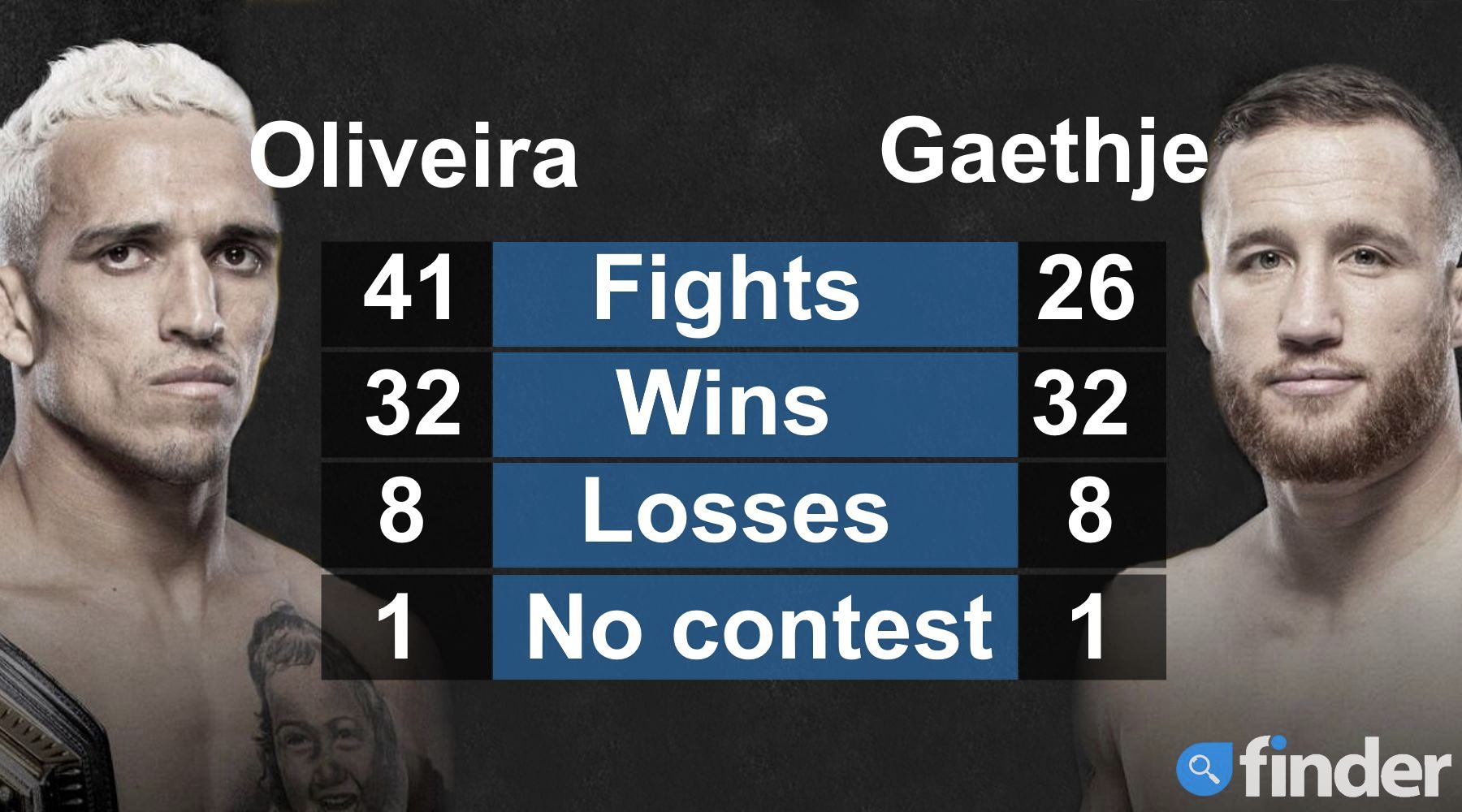 This is one of the harder fights to split, but Oliveira keeps defying expectation and continues to silence the critics. We think he'll sneak through again.