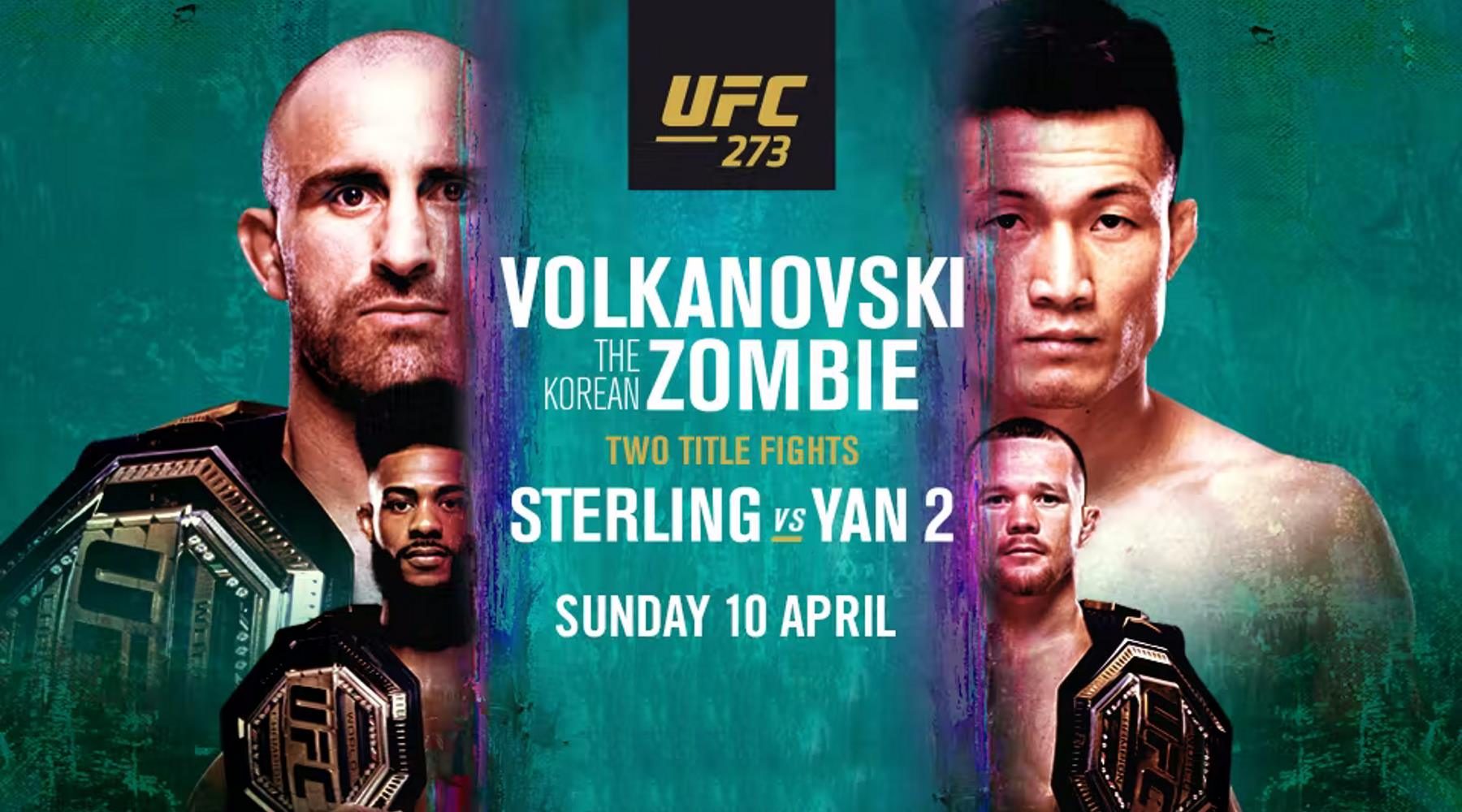 Australia's UFC Featherweight champion Alexander Volkanovski will put his title on the line this week when he takes on the pocket rocket Korean Zombie.

SUMMARY: Volkanovski vs Korean Zombie is live and exclusive to Main Event or UFC Fight Pass. The most accessible way to stream the fight live is through Main Event via Kayo Sports, which costs $54.95.

New South Welshman Alexander Volkanovski enters this fight with a 23-1 record, with 11 victories by knockout. This is his third quest to defend his title having claimed it over Max Holloway in 2019, before defending it against the same fighter in 2020.

He defended it a second time against Brian Ortega in UFC 266 last year.

Jung Chan-sung, otherwise known as the Korean Zombie, is a former kickboxer who has won 17 of his 23 UFC fights. He is also a blackbelt in Brazilian jiu-jitsu.

When is UFC 273 Volkanovski vs Korean Zombie in Australia?

This card gets underway on Sunday 10 April with the main card getting underway at 12pm AEST at the VyStar Veterans Memorial Arena in Jacksonville, Florida.

The preliminary cards will begin at 10am AEST.

There are a range of viewing options for UFC 273. ESPN is showing the preliminary card which means you can watch with a regular subscription on any of Foxtel, Kayo Sports, Foxtel Now, Fetch TV and UFC Fight Pass.

However, if you're after the main card of UFC 273 that features the Volkanovski while the main card is only available via pay-per-view. Your options for that are Main Event on Kayo, Foxtel IQ, UFC Fight Pass, Fetch TV and PlaySation.

You can see our complete guide to watching the UFC here.

Kayo offers a 14-day free trial so you can see if Kayo is right for you.

How to watch UFC 273 with Main Event

If you have a Foxtel subscription, UFC 273 will set you back $54.95. You can place an order via the Main Event website, using the My Foxtel app, your Foxtel remote or over the phone. You can also order the fight if you have Optus TV featuring Foxtel, only over the phone. Ordering through a phone agent will incur an additional $2 booking fee.

New, returning or existing Kayo Sports customers have an opportunity to secure this massive fight directly through Main Event. Using the link mainevent.kayosports.com.au, you can sign up and watch it through your usual Kayo platform. All the information you need about getting Main Event on Kayo can be found here.

The UFC's official website is another option for watching the fight. It will cost you $54.95 through UFC Fight Pass. You can also sign up to Fight Pass for $10.99 a month or $104.99 for an annual pass.

How to watch Volkanovski vs the Korean Zombie on PlayStation

If you have a PlayStation 4 or PS5 console, look for Live Events in the PS Store. Once you have purchased the fight you can watch it through the "videos" menu. It is $54.95 or discounted to $49.95 for PlayStation Plus members.

How to watch UFC 273 with Fetch TV

Volkanovski vs the Korean Zombie will also cost you $54.95 with Fetch TV. Using your Fetch box, go to "manage" and then "subscriptions". Once you have made the purchase you can watch it on TV or your mobile with the Fetch app.

Who will win UFC 273 Volkanovski vs the Korean Zombie? 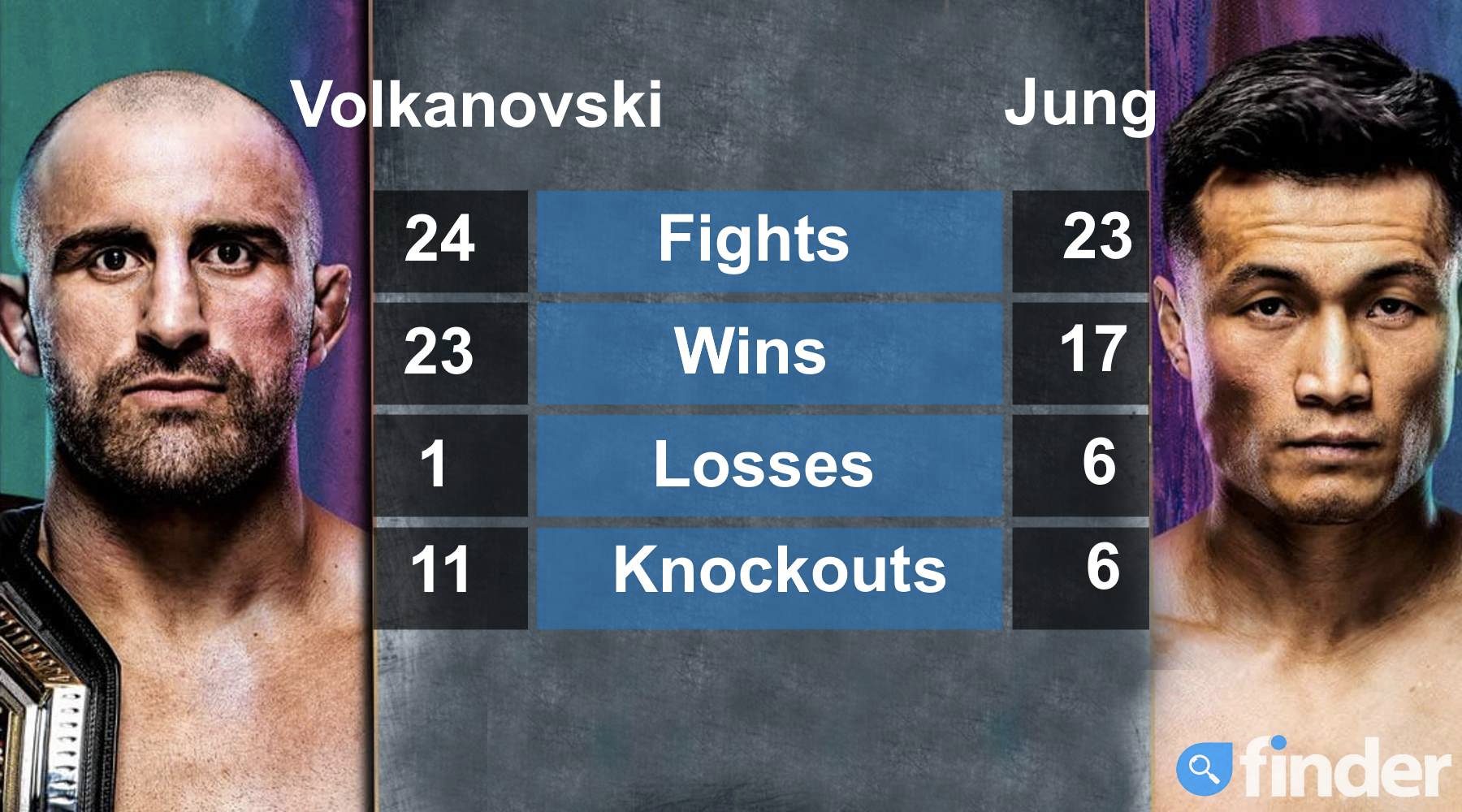 Looking at this fight, we can focus on striking as there is a huge discrepancy in the numbers.

Volkanovski lands 6.42 strikes per minute on average compared to 4.07 for Jung.

Volkanovski has landed 603 strikes in his last 4 fights compared to 216 for Jung.

Conversely Jung has a good record with takedowns and submissions. If Volkanovski turns this into a striking contest you'd sense he'd overpower Jung. We feel it might turn out exactly like that with a commanding victory.