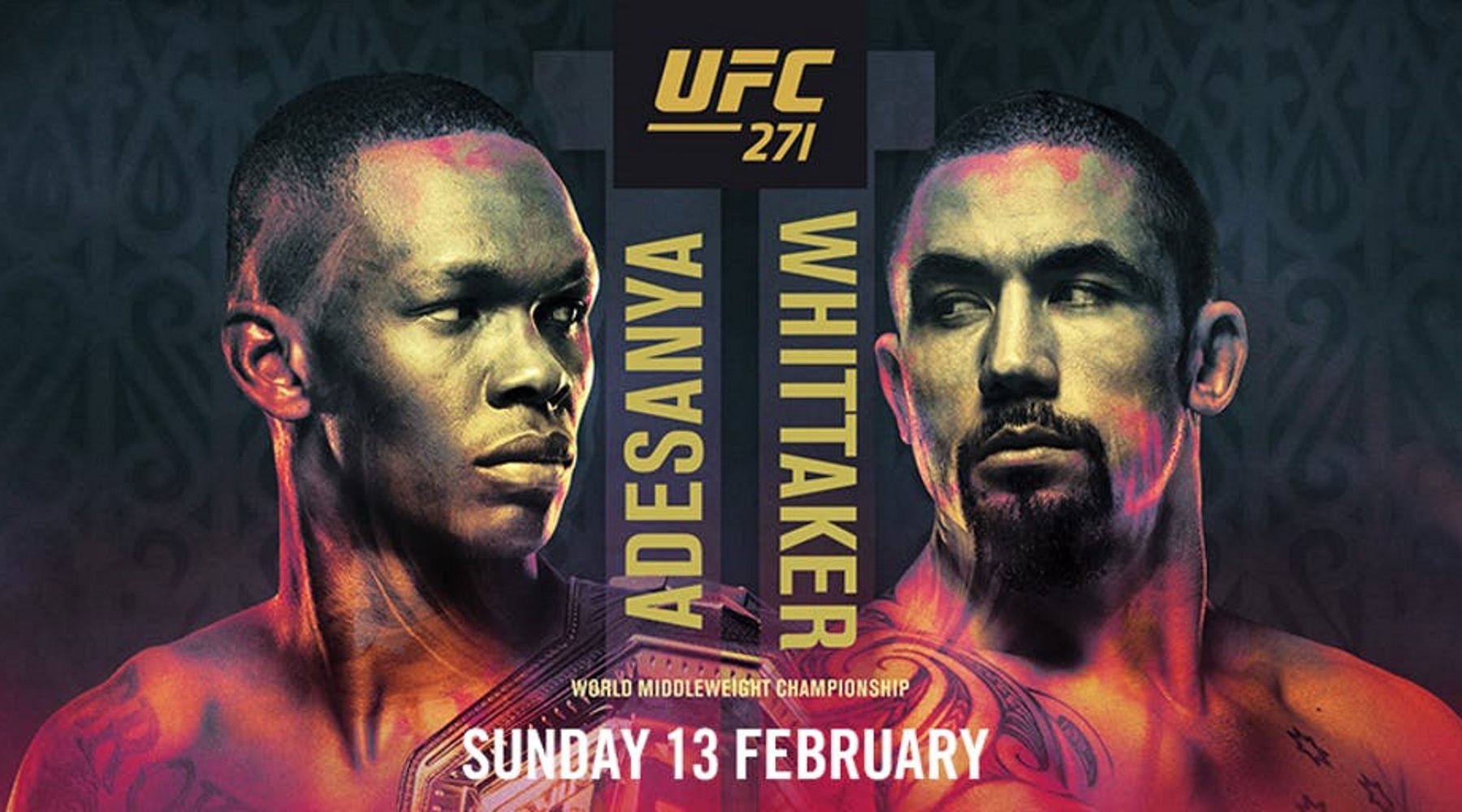 Robert Whittaker and Israel Adesanya will battle it out for the UFC middleweight title this week in what is a rematch more than 2 years in the making.

SUMMARY: The event will be broadcast exclusively on Main Event pay-per-view in Australia which can also be accessed via Kayo. Unless you're already a Foxtel customer, your best option is to watch live on Kayo Sports. You can watch by ordering the PPV for $54.95 via Main Event on Kayo.

Back in October 2019, Israel Adesanya took down Robert Whittaker with a second round stoppage in front of a UFC record crowd of 57,000 people at Marvel Stadium in Melbourne.

Both fighters have kicked on since, although Adesanya did suffer his first defeat when he stepped up a division to fight Jan Błachowicz in March of last year. Whittaker has earned a shot at redemption by defeating the likes of Kevin Gastelum, Darren Till and Jared Cannonier in recent times.

When is UFC 271 Adesanya vs Whittaker 2?

Catch all the action of UFC 271 live from the Toyota Center in Houston, Texas on Sunday 13 February (AEDT). The main card is due to get underway at 2pm AEDT, while the preliminary cards begin with the early prelims at 10am AEDT and the prelims at 12pm AEDT.

How to watch UFC 271 Adesanya vs Whittaker 2

There are a range of viewing options for UFC 271. ESPN is showing the preliminary card, while the main card is exclusive to pay-per-view on Main Event. You can see our complete guide to watching the UFC here.

How to live stream UFC 271 via Kayo Sports

There's a 14-day free trial so you can see if Kayo is right for you.

It boasts a range of features and is compatible with iOS and Android devices, PCs, Macs, Android TV, Telstra TV, LG TV, Apple TV, Samsung TV (2017 model or later), Chromecast and AirPlay. You can check out our full Kayo review for more information.

How to watch UFC 271 main card

When it comes to the stacked main card, Main Event on Foxtel, Main Event on Kayo Sports, UFC Fight Pass, Fetch TV, PS4 and PS5 are the providers. You will need to purchase the fight to watch it live or catch a replay. Read on to find out more about watching the UFC 271 main card.

Stream Adesanya vs Whittaker 2 on Main Event via Kayo Sports

New, returning or existing Kayo Sports customers have an opportunity to secure this massive fight directly through Main Event. Using the link mainevent.kayosports.com.au, you can sign up and watch it through your usual Kayo platform. All the information you need about getting Main Event on Kayo can be found here.

If you have a Foxtel subscription, UFC 271 will set you back $54.95. You can place an order via the Main Event website, using the My Foxtel app, your Foxtel remote or over the phone. You can also order the fight if you have Optus TV featuring Foxtel (over the phone only). Ordering through a phone agent will incur an additional $2 booking fee.

The UFC's official website is another option for watching the fight. It will cost you $54.95 through UFC Fight Pass. You can also sign up to Fight Pass for $10.99 a month or $104.99 for an annual pass, but you still need to purchase the fight separately.

How to watch Adesanya vs Whittaker 2 on PlayStation

If you have a PS4 or PS5 console, look for Live Events in the PS Store. Once you have purchased the fight you can watch it through the "videos" menu. It is $54.95 or $49.95 for PlayStation Plus members.

How to watch UFC 271 with Fetch TV

Adesanya vs Whittaker 2 will also cost you $54.95 with Fetch TV. Using your Fetch box, go to "manage" and then "subscriptions". Once you have made the purchase, you can watch it on TV or your mobile with the Fetch app.

Who will win UFC 271 Adesanya vs Whittaker 2? 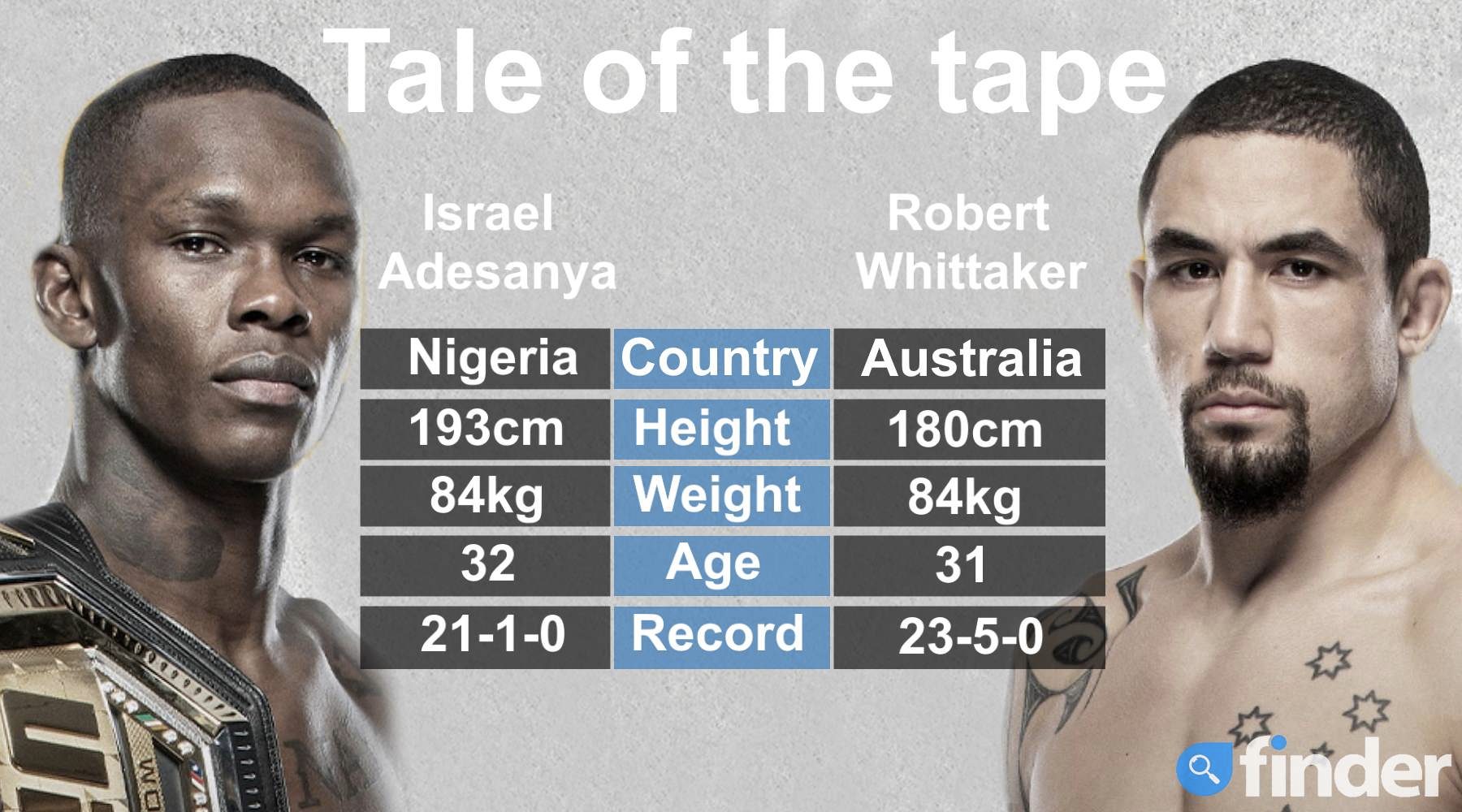 2 years, 4 months and 7 days after they last met, Israel Adesanya and Robert Whittaker will meet again in a fight originally intended to be held in Australia, just as that earlier fight was, in front of a record crowd back in October 2019 at Marvel Stadium.

On that occasion, in UFC 243, Adesanya won via a stoppage with 3:33 on the clock in the second round to dethrone the Nigerian-born New Zealander.

Border restrictions due to the pandemic have limited the options this time around, with the fight to be scheduled in Texas, with both men in strong recent form leading into this rematch.

Adesanya has defended the title he won that day a further 3 times since, but did lose for the first time back in March 2021, which takes the edge off the invincibility a touch. For Whittaker, it was a first fight in nearly a year last time around so he should be a bit sharper this time.

Both men can be strong on the counterattack and Whittaker may look to wrestle more this time in a way of testing Adesanya's takedown defence. This should be another fascinating chapter and possibly not the last written between this pair, but we think Adesanya might have a little too much and defend his middleweight crown for the fourth time.