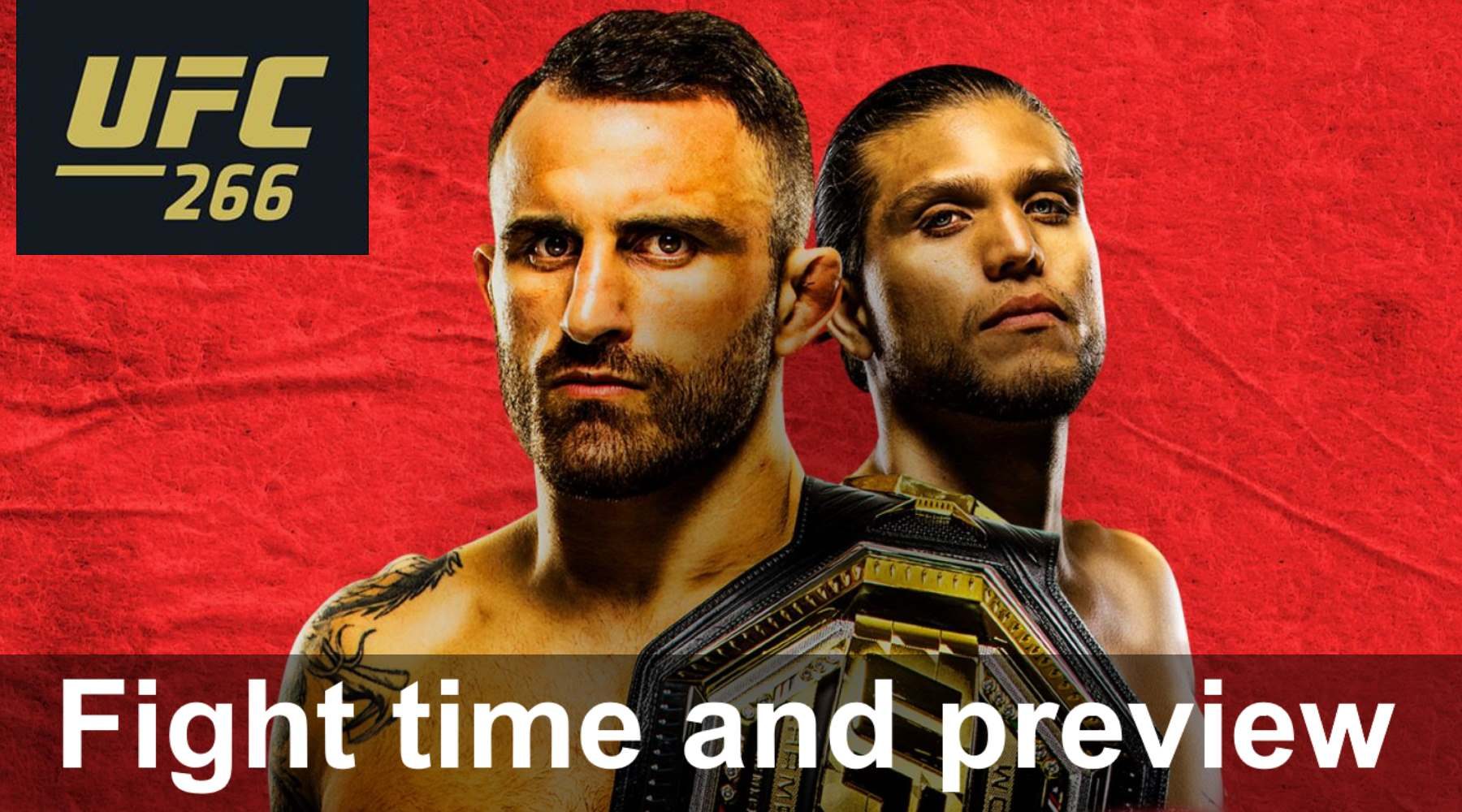 Alexander Volkanovski will have greatness thrust upon him should he defend his world featherweight title against Brian Ortega at UFC 266.

SUMMARY: You can watch the UFC 266 preliminary rounds for free on any device with Kayo Sports by using this 14-day trial. You can then purchase the main card through Main Event on Foxtel or Main Event on Kayo Sports.

Australian world featherweight champion Alexander Volkanovski will step into the Octagon for the first time since July 2020 in the main event fight of UFC 266. The 32-year-old is defending his title for a second time after successfully holding on to the belt last year.

In UFC 266, he meets American Brian Ortega, an aggressive no-nonsense Californian who is a black belt in Brazilian jiu-jitsu. Ortega is getting his second shot at a world title after failing once previously, against Max Holloway back in 2018.

When is UFC 266 Volkanovski vs Ortega?

All the action from UFC 266 takes place at T-Mobile Arena in Las Vegas, Nevada. The main card is set to get underway at midday AEST on Sunday 26 September. The preliminary card kicks off at 8am AEST. Check out our 2021 UFC schedule here.

How to watch Volkanovski vs Ortega

There are a range of viewing options for UFC 266. ESPN is showing the preliminary card, while the main card is exclusive to pay-per-view on Main Event. You can see our complete guide to watching the UFC here.

How to watch UFC 266 Volkanovski vs Ortega preliminary card

As the prelims are on ESPN, which means you can follow along with Foxtel, Kayo Sports, Foxtel Now, Fetch TV and UFC Fight Pass. Among these options, Kayo is the pick for live sport.

Kayo is currently offering a 14-day free trial so you can see if it is right for you.

How to watch Volkanovski vs Ortega UFC 266 main card

The exclusive providers for the 5-fight main card are Main Event on Foxtel, Main Event on Kayo Sports, UFC Fight Pass, Fetch TV, PS4 and PS5. You will need to purchase the fight to watch it live or catch a replay. Read on to find out more about watching the UFC 266 main card.

New, returning or existing Kayo Sports customers have an opportunity to secure this massive fight directly through Main Event.

Using this link mainevent.kayosports.com.au, you can sign up and watch it through your usual Kayo platform.

All the information you need for getting Main Event on Kayo can be found here. It also costs $54.95 and gives you full access to Kayo from 26–30 September.

How to watch UFC 266 with Main Event

If you have a Foxtel subscription, UFC 266 will set you back $54.95. You can place an order via the Main Event website, using the My Foxtel app, your Foxtel remote or over the phone. You can also order the fight if you have Optus TV featuring Foxtel, over the phone only. Ordering through a phone agent will incur an additional $2 booking fee.

The UFC's official website is another option for watching the fight. It will cost you $54.95 through UFC Fight Pass. You can also sign up to Fight Pass for $10.99 a month or $104.99 for an annual pass, but you still need to purchase the fight separately.

How to watch Volkanovski vs Ortega on PlayStation

If you have a PS4 or PS5 console, look for Live Events in the PS Store. Once you have purchased the fight you can watch it through the "videos" menu. It is $54.95 or $49.95 for PlayStation Plus members.

How to watch UFC 266 with Fetch TV

Volkanovski vs Ortega will also cost you $54.95 with Fetch TV. Using your Fetch box, go to "manage" and then "subscriptions". Once you have made the purchase you can watch it on TV or your mobile with the Fetch app.

Who will win UFC 266 Volkanovski vs Ortega? 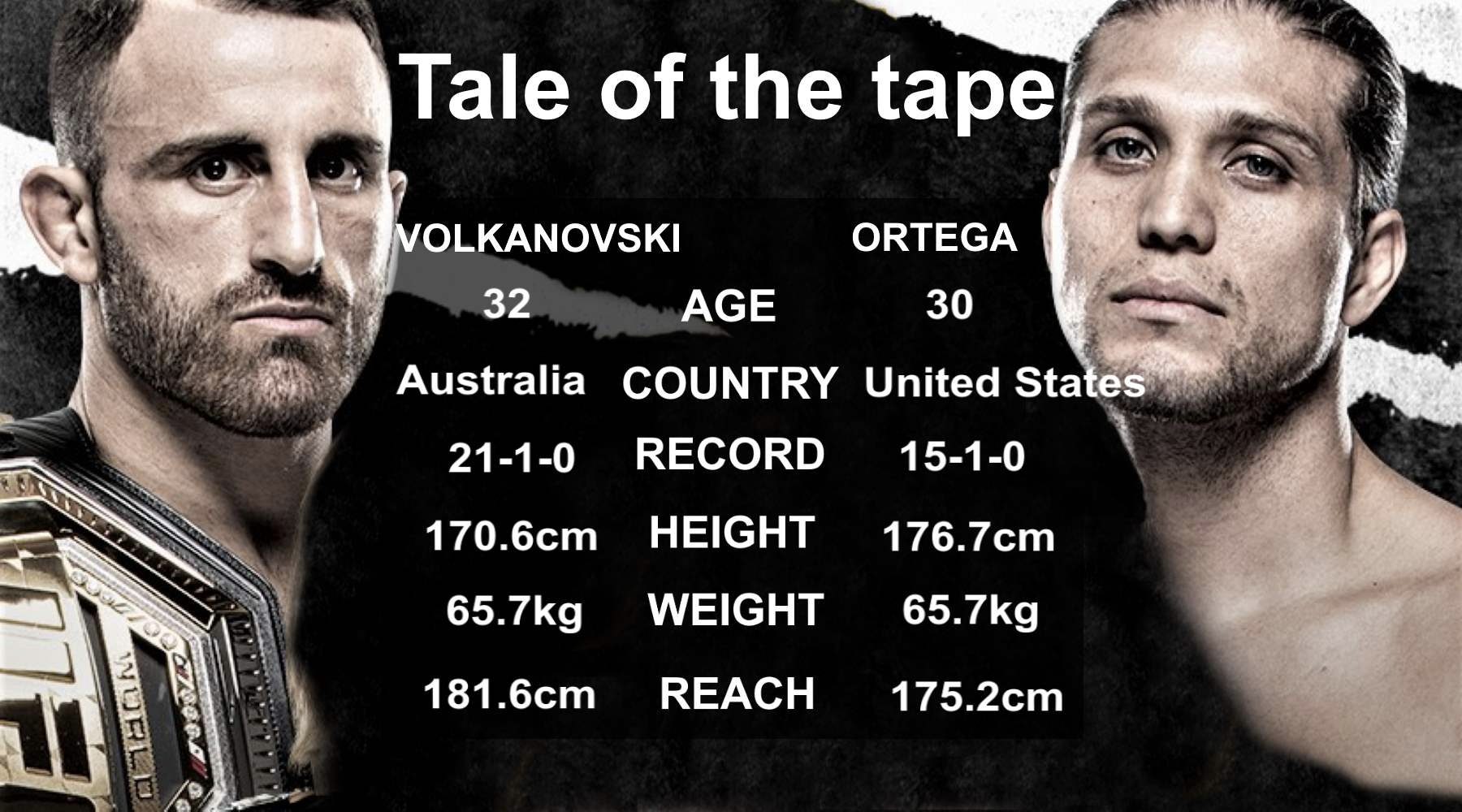 Expect to see a technical, tough battle. Strong and incredibly versatile, Volkanovski is known as one of the most complete fighters in all UFC. His ability to adapt his style and strategy to whoever he's fighting is a weapon on its own.

In Ortega, he faces a man who likes to get on the front foot and dictate the fight. Ranked number 2, the Californian has had 1 previous shot at the title, in which he was outclassed by Max Holloway, who Volkanovski has defeated twice.

The American is a much better fighter than the guy who lost to Holloway though. He's smarter, wiser, hungrier and at the top of his game. We're tipping the Aussie to defend his title, but it'll be hard, brutal work to do so.